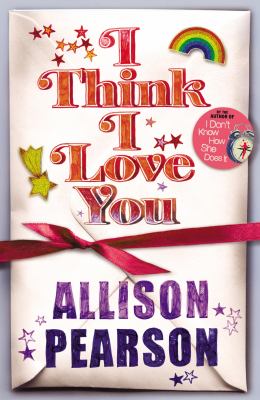 I think I love you Allison Pearson.

Genre/Form: Romance fiction. | Domestic fiction.DDC classification: Fiction Summary: A novel by a writer who understands the female psyche, and observes the male with a wary eye. This novel, set in the '70s and the present day, is about teen obsession, rites of passage and one girl's infatuation with David Cassidy. It's about love in many forms, but first love in particular, how it shapes us and imprints us.
Tags from this library: No tags from this library for this title. Log in to add tags.

It is 1974, and 13-year-old Petra Williams is prey to self-doubt and teenage angst. She finds solace in her mastery of her one special subject: teen heart-throb David Cassidy. 20 years later, Petra's life has moved on. But what will happen when she decides to pursue an unclaimed prize to meet the man of her adolescent dreams?

A novel by a writer who understands the female psyche, and observes the male with a wary eye. This novel, set in the '70s and the present day, is about teen obsession, rites of passage and one girl's infatuation with David Cassidy. It's about love in many forms, but first love in particular, how it shapes us and imprints us.

Arriving nine years after Pearson's best-selling debut, I Don't Know How She Does It, her second novel is a very different book. It begins in 1974 with Petra, a teenager in south Wales, who is pop star David Cassidy's biggest fan. As Petra and her best friend, Sharon, read The Essential David Cassidy Magazine, they moon over every song and outfit. Alternating chapters focus on Bill, a young journalist who pretends to be Cassidy as he writes the magazine. Petra and Sharon spend hours answering questions about their idol for a contest that could win them a chance to meet Cassidy. The novel's second half takes place in 1998; Petra is an adult with her own teenage daughter and a troubled marriage. After her mother dies, Petra discovers that her mother never told her she won the contest. She contacts the magazine publisher (now Bill, of course) and finds herself on the way to meet Cassidy. Verdict The Briticisms and cultural references can be hard for an American reader to understand at times. And while the second half is well paced, the first half drags a bit. If David Cassidy was your man back in the day, this is the book for you. [200,000-copy first printing; four-city tour.]-Beth Gibbs, Davidson, NC (c) Copyright 2010. Library Journals LLC, a wholly owned subsidiary of Media Source, Inc. No redistribution permitted.

With its internal character monologues and lively dialogue, this novel works particularly well on audio. Sian Thomas is marvelous in bringing to life 13-year-old Petra, a Welsh girl in 1974 with an obsessive crush on David Cassidy. Her voice perfectly evokes the complex mix of absurdity, yearning, and poignant insecurity of adolescence as Petra struggles to fit in with her female friends and negotiate shifting alliances. Thomas is equally adept as the older, wiser, more reflective adult Petra. In addition to bringing out every subtle nuance of emotion and character, Pearson expertly voices a variety of accents: the thick Welsh of young Petra, the guttural German of her mother, the educated as well as working-class British tones, the American voice of Cassidy himself, and most impressively, the accent of the adult Petra (who has lived in London for many years), a London accent with hints of her native Welsh. A must-listen audio for fans of smart and funny contemporary fiction-or just those looking for inspired audio narration. A Knopf hardcover. (Feb.) (c) Copyright PWxyz, LLC. All rights reserved.

During the 1970s, Welsh teenager Petra and her best friend, Sharon, are wild for pop singer David Cassidy, along with millions of other fans the world over. They spend huge chunks of their leisure time perusing The Essential David Cassidy Magazine for clues to David's likes and dislikes, unaware that most of the material is being created out of whole cloth by ne'er-do-well English major William Finn, whose take on the cherubic singer is a good deal more acerbic than theirs. The novel's second half finds the characters 25 years later as Petra is grieving the death of her mother and the end of her marriage, while Bill is now running an empire of celebrity magazines though still unlucky in love. A lost letter brings them together for a David Cassidy reunion concert, which proves to be a turning point in both of their lives. Pearson is at her best in capturing the way teenage girls use their romantic obsessions with celebrities to work out their fears about real relationships with the opposite sex. An afterword includes Pearson's delightful 2004 interview with a 54-year-old Cassidy.--Wilkinson, Joanne Copyright 2010 Booklist

Welsh teenager obsessed with pop star David Cassidy finally gets an opportunity to meet her idol, 24 years later than expected.In 1974, with his bell-bottom catsuits, shaggy hair and come-hither green eyes, Partridge Family star David Cassidy is everything to awkward 13-year-old Petra Williams. She loves him with the near-hysterical devotion shared by many of her contemporaries. A smart girl, Petra gets little emotional support from her strict, German-born mother Greta. She prefers the house of her best friend Sharon, a boisterous, sweet-natured classmate who is almost as besotted with David as she is. Their world, with its emotional highs and lows, is little understood by adults, with one exception. Bill Finn is a young editor at The Essential David Cassidy Magazine. Not only does his work make him privy to the secret world of teenage girls, he actually is David, at least in print. His ghostwritten monthly "letters" from the star stir the fans, while embarrassing the author, who does not have the heart to even tell his girlfriend what he does. Like Petra, he is present at the singer's notoriously crowded London "farewell" concert, during which 750 girls ended up needing medical treatment. After that, Petra starts to grow out of her infatuation, becoming an accomplished music therapist with a teenaged daughter of her own. But after separating from her husband, she goes through her late mother's things and discovers something Greta had long kept from her. Back in the '70s, Petra had won a contest giving her the chance to meet David. Overcome with conflicting emotions, she tries to claim her prize, and lucks out when Bill Finn gets wind of her story. Now the successful (and single) head of a magazine group, he arranges a dream trip to Las Vegas for Petra and Sharon to finally meet the singer. He tags along, nursing a crush of his own. Witty and engaging, Pearson's follow-up to the bestselling I Don't Know How She Does It (2002) skillfully captures the overwrought emotions of youth, as well as their more subtle but no less ardent adult counterparts.Big-hearted exploration of the bittersweet pleasures of unrequited love.]] Copyright Kirkus Reviews, used with permission.
More book reviews at iDreamBooks.com