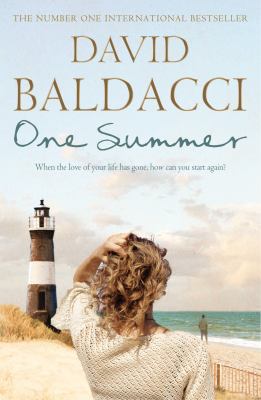 Genre/Form: Domestic fiction. | Thrillers. | General fiction.DDC classification: 813/.6 Summary: Jack, terminally ill and preparing to say goodbye to his family, has a miraculous recovery after his wife is killed in a car accident and struggles to reunite his family at her childhood home on the South Carolina oceanfront.
Tags from this library: No tags from this library for this title. Log in to add tags.

Jack, terminally ill and preparing to say goodbye to his family, has a miraculous recovery after his wife is killed in a car accident and struggles to reunite his family at her childhood home on the South Carolina oceanfront.

Jack, terminally ill and preparing to say goodbye to his family, has a miraculous recovery after his wife is killed in a car accident and struggles to reunite his family at her childhood home on the South Carolina oceanfront.

This tale of "love, tragedy, second chances, fear, and uncertainty" tells the story of Jack, a war vet, proud dad, and husband to high school sweetheart Lizzie. Jack is terminally ill, and while devotedly caring for him, Lizzie perishes in an auto accident. Summoning a newfound will to live, and an alternative treatment, Jack miraculously recovers in time to keep his family together. Unfortunately, his healing does not prevent his mother-in-law from filing for custody of the children. Well performed by Ron McLarty and Orlagh Cassidy, Baldacci's latest is a far cry from his popular legal thrillers. Engaging for the most part, the story is often overly sweet, sentimental, somewhat predictable, and sometimes requires the reader's suspension of disbelief. Longtime Baldacci fans may be disappointed; however, those with a penchant for Nicholas Sparks or similar titles by James Patterson (e.g., Suzanne's Diary for Nicholas) will enjoy it. [See Prepub Alert, 12/1/10; the Grand Central hc, published in June, was a New York Times best seller.-Ed.]-Nicole A. Cooke, Montclair State Univ. Lib., NJ (c) Copyright 2011. Library Journals LLC, a wholly owned subsidiary of Media Source, Inc. No redistribution permitted.

Legal thriller fixture Baldacci (Deliver Us from Evil) churns out a creaky, contrived family drama about Jack Armstrong, a terminally ill family man just praying to make it to Christmas. Sadness abounds, much more so when Jack's wife, Lizzie, is killed in a car wreck while on a medicine run. Plans are made by Jack's mean mother-in-law Bonnie: the three kids will get divided up among aunts and uncles across the country, and Jack will be put into hospice. Miraculously, Jack's health turns around, and he's able to reclaim his kids and move the brood from Ohio to the South Carolina shore where Lizzie grew up. There, he tries to reassemble the family and learn how to be a single parent, and just as they're beginning to settle into a functional family again, Bonnie sues for custody of the kids. Yes, it possesses all the subtlety of a dog fight, but it's also choked with pap ("No matter what you do, no matter how hard you fight, life sometimes just doesn't make sense") and so sappy you'd think Baldacci was earning a commission on each tear jerked. (June) (c) Copyright PWxyz, LLC. All rights reserved.

Baldacci, the author of a string of best-selling thrillers, once again steps outside his comfort zone. Like Wish You Well (2000) and The Christmas Train (2002), this novel focuses on family and relationships. However, compared to those titles, this one feels undercooked. The story is straight out of the B-movie playbook. A man is on his deathbed (literally) when his wife is killed in a car accident. Well-meaning relatives take charge of the three children, but then, miraculously, the man (whose illness is described as, as always, fatal) makes a full recovery. And now he must bring his family back together and rediscover the beauty of life itself. Readers completely unfamiliar with this sort of movie-of-the-week story might be entertained, but others will be in for a disappointment. While the writing is competent, the story is predictable and the characters overly familiar. Baldacci is a splendid writer when he has something to sink his teeth into. Here, he seems bored by his own story. HIGH-DEMAND BACKSTORY: Thriller master Baldacci turns to high-concept melodrama. Will his crime fans follow him to Pat Conroy territory? We're skeptical, but his publisher is determined: expect to be seeing this book promoted everywhere from apps to airports.--Pitt, David Copyright 2010 Booklist

Baldacci (Hell's Corner, 2010, etc.) departs from thriller mode to pen this often-maudlin tale of familial reinvention.In Iraq and Afghanistan, Jack earned two Purple Hearts and a Bronze Star, but it appears that the appointment in Samarra he dodged has been waiting for him in Cleveland, Ohio. As Christmas nears, he is dying of an unnamed but always terminal disease, surrounded by his two boys, Jackie and Cory, prickly teenage daughter Mikki, wife Lizzie and mother-in-law Bonnie. On Christmas Eve, Lizzie rushes out into a snowstorm to fill Jack's pain-med prescriptions and is killed in a crash. Bonnie supervises the dispersal of the children to various relatives, and Jack is consigned to a hospice. One day, he finds he's breathing on his own. Painstakingly, he recovers and even gains back his former fitness level as an Army Ranger. He gathers the children and moves them to Lizzie's beloved South Carolina seaside home, nicknamed the Palace, in hopes of fulfilling what turned out to be Lizzie's last wish. Once in S.C., Jack finds the Palace and adjacent lighthouse in considerable disrepair. A trained contractor, he sets to work with his crusty, Harley-driving partner Sammy. Mikki, a singer/songwriter, finds a kindred spirit in fellow rocker Liam, whose mother Jenna, a corporate lawyer turned wisecracking restaurant owner, hires Jack to soundproof Liam's studio. The stage is set for new love, but first Jack must overcome his obsession with fixing the lighthouse beam and turn the searchlight on his children. Especially since Bonnie is scheming to get custody of the youngsters. It doesn't help that Jack is only too willing to tangle with small town toughs, or that Mikki has run afoul of the local mean teen queen and her high-school football henchmen.Baldacci's muscle-bound style doesn't do subtle: He is best at choreographing fight scenes, rescues and dire brushes with severe weather, all of which, thankfully, are here in abundance.Overall, though, the stilted language and trite sentimentalism are yawn-inducing.]] Copyright Kirkus Reviews, used with permission.
More book reviews at iDreamBooks.com