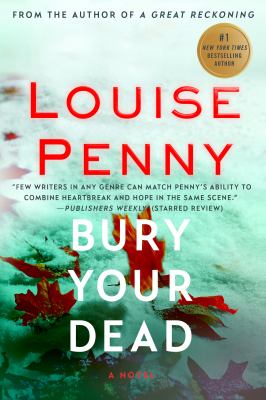 Genre/Form: Detective and mystery fiction.DDC classification: 813/.6 Summary: An obsessive historian's quest for the remains of the founder of Quebec, Samuel de Champlain, ends in murder. Could a secret buried with Champlain for nearly 400 years be so dreadful that someone would kill to protect it? Although he is supposed to be on leave, Chief Inspector Gamache cannot walk away from a crime that threatens to ignite long-smoldering tensions between the English and the French. Meanwhile, he is receiving disquieting letters from the village of Three Pines, where beloved Bistro owner Olivier was recently convicted of murder.
Tags from this library: No tags from this library for this title. Log in to add tags.
Fiction notes: Click to open in new window

It is Winter Carnival in Quebec City, bitterly cold and surpassingly beautiful. Chief Inspector Armand Gamache has come not to join the revels but to recover from an investigation gone hauntingly wrong. But violent death is inescapable, even in the apparent sanctuary of the Literary and Historical Society--where an obsessive historian's quest for the remains of the founder of Quebec, Samuel de Champlain, ends in murder. Could a secret buried with Champlain for nearly four hundred years be so dreadful that someone would kill to protect it?

Meanwhile, Gamache is receiving disquieting letters from the village of Three Pines, where beloved Bistro owner Olivier was recently convicted of murder. "It doesn't make sense," Olivier's partner writes every day. "He didn't do it, you know."

As past and present collide in this astonishing novel, Gamache must relive a terrible event from his own past before he can begin to bury his dead.

An obsessive historian's quest for the remains of the founder of Quebec, Samuel de Champlain, ends in murder. Could a secret buried with Champlain for nearly 400 years be so dreadful that someone would kill to protect it? Although he is supposed to be on leave, Chief Inspector Gamache cannot walk away from a crime that threatens to ignite long-smoldering tensions between the English and the French. Meanwhile, he is receiving disquieting letters from the village of Three Pines, where beloved Bistro owner Olivier was recently convicted of murder.

This sixth entry in Agatha and Anthony award-winning author Penny's (www.-louisepenny.com) Armand Gamache series is among the best. This time, the chief inspector is in Quebec City recovering from a recent traumatic incident when he becomes involved in a murder. The familiar setting of Three Pines is still featured, however, as the murder from Penny's previous title in this series, The Brutal Telling (2009), is revisited by one of Gamache's colleagues. The solutions to both killings as well as the event that drew Gamache to Quebec in the first place are all slowly and expertly revealed. British actor Ralph Cosham's narration is a bit flat, but not to the point where it detracts from the enjoyment of the book. Recommended. [The Minotaur: St. Martin's hc received a starred review, LJ 7/10.-Ed.]-Mary Knapp, Madison P.L., WI (c) Copyright 2011. Library Journals LLC, a wholly owned subsidiary of Media Source, Inc. No redistribution permitted.

At the start of Agatha-winner Penny's moving and powerful sixth Chief Insp. Armand Gamache mystery (after 2009's The Brutal Telling), Gamache is recovering from a physical and emotional trauma, the exact nature of which isn't immediately disclosed, in Quebec City. When the body of Augustin Renaud, an eccentric who'd spent his life searching for the burial site of Samuel de Champlain, Quebec's founder, turns up in the basement of the Literary and Historical Society, Gamache reluctantly gets involved in the murder inquiry. Meanwhile, Gamache dispatches his longtime colleague, Insp. Jean Guy Beauvoir, to the quiet town of Three Pines to revisit the case supposedly resolved at the end of the previous book. Few writers in any genre can match Penny's ability to combine heartbreak and hope in the same scene. Increasingly ambitious in her plotting, she continues to create characters readers would want to meet in real life. 100,000 first printing. (Oct.) (c) Copyright PWxyz, LLC. All rights reserved

*Starred Review* Penny's first five crime novels in her Armand Gamache series have all been outstanding, but her latest is the best yet, a true tour de force of storytelling. When crime writers attempt to combine two fully fleshed plots into one book, the hull tends to get a bit leaky; Penny, on the other hand, constructs an absolutely airtight ship in which she manages to float not two but three freestanding but subtly intertwined stories. Front and center are the travails of Gamache, chief inspector of the Sûreté du Quebec, who is visiting an old friend in Quebec City and hoping to recover from a case gone wrong. Soon, however, he is involved with a new case: the murder of an archaeologist who was devoted to finding the missing remains of Samuel de Champlain, founder of Quebec. As Gamache is drawn into this history-drenched investigation the victim's body was found in an English-language library, calling up the full range of animosity between Quebec's French majority and dwindling English minority he is also concerned that he might have jailed the wrong man in his last case (The Brutal Telling,2009) and orders his colleague, Jean Guy Beauvoir, back to the village of Three Pines to find what they missed the first time. Hovering over both these present investigations is the case gone wrong in the past, the details of which are gradually revealed in perfectly placed flashbacks. Penny brilliantly juggles the three stories, which are connected only by a kind of psychological membrane; as Gamache makes sense of what happened in the past, he is better able to think his way through present dilemmas. From the tangled history of Quebec to the crippling reality of grief to the nuances of friendship, Penny hits every note perfectly in what is one of the most elaborately constructed mysteries in years.--Ott, Bill Copyright 2010 Booklist

The sixth appearance of Armand Gamache, North America's most humane detective.Chief Inspector Gamache of the Canadian Sret and his associate Jean Guy Beauvoir are slowly healing from a case that turned horribly bad. Gamache spends hours reading in Qubec's Literary and Historical Society library. Beauvoir, at Gamache's instigation, reopens the Three Pines murder enquiry that sent BB owner Olivier to prison. While Beauvoir quietly interrogates the gently eccentric residents of Three Pines (The Brutal Telling, 2009, etc.) to see whether anyone else had motive to kill a hermit for his antique treasures, happenstance lands Gamache in the middle of another murder case. Augustin Renaud, obsessed with finding the burial place of idolized Qubec city founder Samuel de Champlain, lies dead in the library's basement. The riddles of who killed him and why force Gamache and his aging mentor Emile to examine 400 years of Qubec history. As they delve for clues among the library's old journals and diaries, they focus ever more closely on the endless rancor between the French and the English.Gamache's excruciating grief over a wrong decision, Beauvoir's softening toward the unconventional, a plot twist so unexpected it's chilling, and a description of Qubec intriguing enough to make you book your next vacation there, all add up to a superior read. Bring on the awards.]] Copyright Kirkus Reviews, used with permission.
More book reviews at iDreamBooks.com