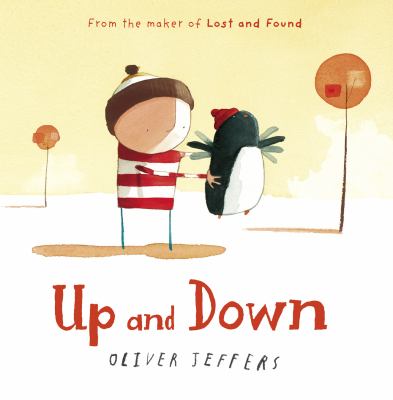 Up and down / Oliver Jeffers.

<p>In this much-anticipated sequel to the internationally best-selling picture book Lost and Found, we re-visit the boy and the penguin after their trip to the South Pole...</p> <p>The boy and the penguin still enjoy spending all their time together... That is, until the penguin starts to dream of flying, ignoring the boy's advice that it is impossible.</p> <p>Running away, the penguin visits place after place, searching for a chance to get his feet off the ground. But will flying be everything he had hoped? And is the boy missing him as much as he is missing the boy?</p> <p>A heart-warming story about friendship, love and reaching for your dreams, from highly-regarded, multi-award-winning author-illustrator Oliver Jeffers.</p>

Sequel to: Lost and found.

All seems well between the two friends, until the penguin starts getting ideas above his station, wanting to fly, while ignoring the boy's advice that it is impossible for penguins. Deciding that he'd be better off elsewhere, the penguin runs away. But is the boy missing the penguin as much as the penguin is missing the boy? Suggested level: junior.

K-Gr 2-Once upon a time, in a book called Lost and Found (Philomel, 2006), a penguin appeared at a small boy's doorstep. Since that adventure, in which the two traveled to the South Pole in a rowboat, the boy has crash-landed his plane on the moon and rocketed into space to catch a star. In this installment, the fearless, practical, and sympathetic child-drawn as a circle (head), square (striped shirt), and two lines (legs)-is back with his penguin friend. They play Telephone, Parcheesi, and tuba-guitar duets-until the penguin decides that he must learn to fly. "He did own wings after all, although they didn't seem to work very well. But that didn't stop the penguin trying." Quirky watercolor illustrations enrich the plot with examples-e.g., increasingly large balloons tied around the bird's middle, or the penguin leaping from a desk chair mounted atop a dresser while the boy sets out a pillow for a landing pad. A chance sighting of a circus help-wanted poster takes the penguin off on his own and both friends must follow exciting, suspenseful, and wistful paths back to one another. Jeffers has an endearing, deceptively simple style that will warm the hearts of children and adults. An expert draughtsman and a gifted colorist, he creates artwork that is as masterful as it is eccentric. (Devoted readers will be delighted to find pictorial references to his earlier books.) His peculiar plots combine with a saccharine-free sensitivity to the nuances of friendship, making this book just plain special.-Susan Weitz, formerly at Spencer-Van Etten School District, Spencer, NY (c) Copyright 2010. Library Journals LLC, a wholly owned subsidiary of Media Source, Inc. No redistribution permitted.

In this tale of steadfast friendship and fulfillment, Penguin dreams of flying. In pursuit of his dream, he ends up zooming through the air, alone and terrified, as a "living cannonball" in the circus. But all's well: his best friend, a little boy, is there to catch him. Spare but expressive, the illustrations (a few backgrounds are too dark) suit the story's restraint. (c) Copyright 2011. The Horn Book, Inc., a wholly owned subsidiary of Media Source, Inc. No redistribution permitted.
More book reviews at iDreamBooks.com