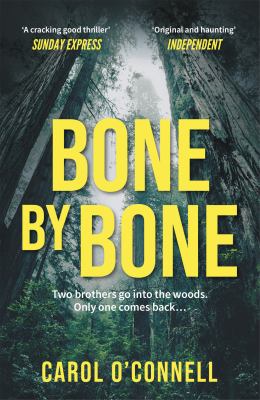 BookPublisher: New York : G.P. Putnam's Sons, c2008Description: 340 pages ; 24 cm.Content type: text Media type: unmediated Carrier type: volumeISBN: 9780755352982 (pbk.); 9780399155147; 0399155147.Subject(s): Missing persons -- California -- Fiction | Brothers -- California -- FictionGenre/Form: Thrillers (Fiction) | Detective and mystery fiction.DDC classification: 813/.54 Summary: In the northern California town of Coventry, two teenage brothers go into the woods one day, but only one comes back. No one knows what happened to the younger brother, Josh, until twenty years later, when the older brother, Oren, now an ex-investigator for the Army CID, returns to Coventry for the first time in many years and sets out to solve the mystery of his brother's murder.
Tags from this library: No tags from this library for this title. Log in to add tags.

In the northern Californian town of Coventry, two teenage brothers go into the woods one day but only one comes back. No one knows what happened to the younger brother, Josh. Twenty years later, when the older brother, Oren, now an ex-investigator for the Army Criminal Investigations Department, returns home after many years, he is confronted on his first morning back with a human jawbone, teeth still intact, thrown onto the front porch. Josh is coming home . . . bone by bone.

Using all his investigative skills, Oren sets out to solve the mystery of his brother's murder. Coventry is a town full of secrets and secret-keepers but the greatest secret of all belonged to his brother, and it is only by unravelling it that Oren can discover the truth that has haunted them all for twenty years.

In the northern California town of Coventry, two teenage brothers go into the woods one day, but only one comes back. No one knows what happened to the younger brother, Josh, until twenty years later, when the older brother, Oren, now an ex-investigator for the Army CID, returns to Coventry for the first time in many years and sets out to solve the mystery of his brother's murder.

The remains of Josh, murdered 20 years earlier, have been showing up on his father's porch, and brother Oren returns to their northern California home to discover the truth and put the past to rest. O'Connell, well known for her Kathy Mallory series, lives in New York City. National tour. (c) Copyright 2010. Library Journals LLC, a wholly owned subsidiary of Media Source, Inc. No redistribution permitted.

At the start of O'Connell's atmospheric if overplotted stand-alone, former army CID warrant officer Oren Hobbs travels back to the small town of Coventry, Calif., where bones have begun to appear on the family property. Oren's father, a retired judge, is convinced they belong to Josh, Oren's 15-year-old brother, who vanished in the woods when Oren was 17. The town abounds in rumors as well as suspects, from a disfigured and reclusive ex-LAPD officer to a once beautiful hotel owner who may have had an affair with teenage Oren. When a grave is discovered in the woods, Oren is surprised that the broken bones belong not only to Josh but to an unknown woman. Determined to solve his brother's murder, Oren must face his own past and the real possibility that the killer might strike again. O'Connell's characters are complex as always, but she often suffocates them under unnecessary red herrings. Nevertheless, fans of her Kathleen Mallory series (Find Me, etc.) as well as new readers will be satisfied. Author tour. (Jan.) (c) Copyright PWxyz, LLC. All rights reserved

One evening, brothers Oren and Josh Hobbs venture into the woods near the small northern California town of Coventry. Only Oren returns home. What happened to Josh, a boy whose passion for photography drove him to doggedly pursue his subjects? For the 20 years that followed, the case of his missing brother remained unsolved. Then bones from Josh's body begin to appear on the family's doorstep. Oren, who spent time as an investigator for the Army Criminal Investigations Division, comes back to find Coventry still populated by a plethora of seemingly harmless kooks. Or might their eccentricities somehow be tied to Joshua's demise? As he digs into the case, Oren must contend with prickly personalities from his past, from incompetent local sheriff Cable Babitt to heartbreaker Isabelle Winston and her troubled mother Sarah, whose booze-drenched behavior may signal more than mere malaise. In a stand-alone departure from her acclaimed Kathleen Mallory series, O'Connell serves up plenty of plot twists but not enough suspense. Fans will look forward to the next Mallory novel.--Block, Allison Copyright 2008 Booklist

A young soldier comes home after a 20-year absence to find his widowed father aged, his loyal housekeeper unchanged and his kid brother returning, piece by piece, after having vanished two decades before. The disappearance of Josh, back when the two Hobbs brothers were teenagers, never made sense. Although no body had been found in the woods around their small Northern California town, Oren knew his brother was not a runaway. A sensitive and perceptive youth, Josh was also a gifted photographer, his snapshots often revealing more about their small town's populace than was comfortable. But the inept investigation at the time had seemed to point to Oren himself, a seductive young man involved with several of the town's women. These suspicionsand the unyielding personality of his father, a judgehad chased Oren into the Army, where he became a criminal investigator. When he comes back, believing wrongly that his father is dying, he makes a grisly discovery. Someone is returning Josh bone by bone, leaving the relics on the old judge's front porch. It's soon revealed that the mysterious visitor is leaving the remains of other victims as well. O'Connell (Find Me, 2007, etc.) knows how to get into a protagonist's head, mixing guilt and suspicion as one shady character after another surfaces. But the plotting has gaps. The local sheriff is too trusting of Oren, and his unofficial deputizing of the surviving Hobbs boy is accepted without sufficient reason or questioning. The strange neighbors are all a tad too Gothic with their obsessions, addictions and curious scars. Multiple points of view let us into these bizarre characters' heads, but none of them are as vivid as Oren, and the final effect is cartoonish rather than suspenseful. Over-the-top characters show up weak plot points in this psychological thriller. Copyright Kirkus Reviews, used with permission.
More book reviews at iDreamBooks.com