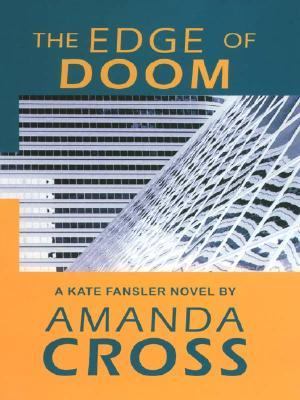 Rich and witty, the literary whodunits by Amanda Cross are a delight for readers who like their mysteries smart and suspenseful. Now comes the highly anticipated sequel to her Kate Fansler novel, Honest Doubt, which the Providence Journal called "one of [her] best books in years." Here, Cross takes her beloved protagonist into uncharted territory, turning Kate Fansler's world upside down. Just when Kate Fansler thinks life couldn't possibly hold any more surprises, she receives a phone call from Laurence, the eldest of her imperious brothers. But a woman as sharp as Kate knows that the moment one stops believing in life's little bends in the road is the time when it has more twists in store. Kate has always been different from the other Fanslers-a free and independent thinker in a family where propriety and decorum are prized above all. She has always assumed it was because she was the youngest and the only girl in the family. But over a drink with Laurence, Kate's whole understanding of herself is thrown into question as he calmly tells her that a strange man came to his office claiming to be Kate's father-and it's quite possible that she is not a Fansler after all. There are even more dangerous curves in the road for Kate Fansler, especially after she meets the man who calls himself her father. When more life-threatening secrets and lies emerge, Kate and the Fansler family are suddenly pitched perilously close to the edge of doom From the Hardcover edition.

Carolyn Heilbrun becomes Cross to write this story of a young woman who finds her life threatened after a stranger claims to be her real father. (c) Copyright 2010. Library Journals LLC, a wholly owned subsidiary of Media Source, Inc. No redistribution permitted.

The 13th Kate Fansler novel, following Honest Doubt (2000), takes an inward and somewhat less satisfying turn to focus on Kate herself. Previous outings featured crimes committed in or related to academic institutions, but this time a family matter kicks off the story a stranger has approached Kate's pompous oldest brother, Laurence, claiming to be Kate's biological father. DNA analysis removes one kind of uncertainty about the relationship between Kate and Jason "Jay" Ebenezer Smith, but other kinds crop up when Jay disappears. Kate's lawyer husband, Reed, unearths more evidence of Jay's past under a different name than "Smith," and different versions of a story about art theft lurking in his background get bandied about. "Not much action in this play," Kate thinks to herself after an unsatisfactory verbal exchange, a comment that could apply as well to this novel. Similarly, in contrast to most crime fiction, there's hardly any description of the main settings (apartments, offices and restaurants in Manhattan), perhaps an intentional illustration of Kate's self-analysis about her lack of visual awareness of people and places. Without the thrills and excitement normally encountered in a mystery, the reader is left with the literary wit and classy conversation for which Cross is best known. For many, that's reason enough to celebrate. (Nov. 1) FYI: Amanda Cross is the pseudonym of Carolyn G. Heilbrun, author of Writing a Woman's Life (1988) and other feminist works. (c) Copyright PWxyz, LLC. All rights reserved

This thought piece from literary scholar Carolyn Heilbrun (writing under her pseudonym Amanda Cross) burnishes and deepens the character of New Yorker, feminist, and literature professor Kate Fansler. Kate has always held herself apart from her conservative and dull older brothers, and when the eldest summons her to his club to relay the news that their father might not be her father, she's astonished. When DNA proves that an elderly gentleman named Jay, who has sought out the family after 50 years, is indeed her father, Kate is intrigued by their physical resemblances and the admission that her genteel and repressed mother did indeed have one grand passion. Jay's professional and personal life spins out in a web of rather melodramatic mystery; what is utterly compelling here is the elegant counterpoint of the ancient nature-versus-nurture argument. Shakespeare and Edith Wharton quotations bolster a vision of fathers and daughters as wellsprings of grace, each for the other, and as always, Kate's husband, Reed, is the almost perfect spouse. Very satisfying on both an intellectual and an emotional level. --GraceAnne A. DeCandido

English professor Kate Fansler (Honest Doubt, 2000, etc.) has always treasured her differences from the stuffy investment bankers she has for older brothers, but it never occurred to her that there might be a special reason for those differences. Now, without warning, the unasked riddle is answered by the appearance of a man who claims to be her father and has the DNA evidence to back him up. Jason ("Jay") Ebenezer Smith is a successful restoration architect who fell in love with her older society mother before he was 20, he tells Kate; she dismissed Jay soon after the newborn Kate was accepted by her husband without suspicion; and he hasn't been in touch with her before because he went west to get away from Louise Fansler and ended up in the Witness Protection Program after testifying against a former friend, an art thief who killed a guard during a museum robbery and swore to kill Jay as well if he were ever released from prison. It's a tale as romantic as the persistent Shakespeare analogies with which it's garnished, but some checking by Kate's husband, former New York ADA Reed Amhearst, reveals strategic omissions and distortions that trouble Kate even more deeply when Jay disappears, leaving Kate and Reed to sort through the versions of his life story until they learn the truth. The crown of Cross's career, a search for Kate's roots unfolding almost entirely in carefully wrought dialogue that perfectly mingles detective work, literary criticism, and the tale of the heroine's birthright.
More book reviews at iDreamBooks.com