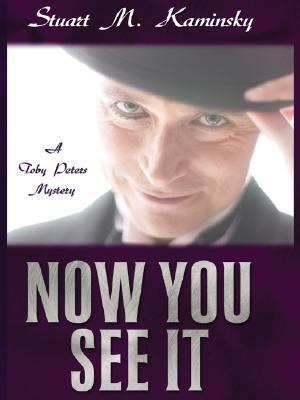 An Edgar Award-winning AuthorA string of star-studded successes has won tinsel-town detective Toby Peters a bit of local celebrity, and that's something his new client, Harry Blackstone, understands. At the Pantages Theater in Los Angeles, Blackstone is billed as the World's Greatest Living Magician. But someone among the Los Angeles Friends of Magic is intent upon ruining that - whatever the price.Available only in Americana 4 & 5.

When PI Toby Peters answers the bell for the 24th time, his footwork is as nimble as ever, even if the dance will be familiar to fans of Kaminsky's Hollywood historical series. The celebrity-friendly detective has aided every kind of star from Errol Flynn in the first book (Bullet for a Star) to Joan Crawford in the most recent (Mildred Pierced). Toby often earns gratitude, frequently reaps scars and bruises, but never garners the kind of riches likely to change his boarding-house lifestyle. As WWII appears headed for a close, the great magician Harry Blackstone, who's been challenged and (apparently) threatened by a third-rate competitor, approaches Toby. Now teamed up with his brother, Phil, Toby undertakes to protect and unmask Blackstone's nemesis. Kaminsky makes an art of interjecting bits and pieces of period color, from Toby's dilapidated Crosley auto to 1940s songs or jingles. The running madcap humor includes landlady Irene Plaut's endless memoirs and dentist Shelly Minck's wacky inventions. Murder transforms Blackstone from magician to suspect and leaves him holding the bag, with predictably enjoyable results. Intriguing but simple magic tricks borrowed from Blackstone: The Magic Detective radio show serve as clever chapter lead-ins. Agent, Donald Maass. (Nov. 2) (c) Copyright PWxyz, LLC. All rights reserved

Kaminsky is tirelessly inventive, with more than 70 novels in three ongoing series, one set in old-time Hollywood and two more in contemporary Chicago and Moscow, respectively. What's more, Kaminsky neatly sidesteps the traps many prolific writers fall into--the first, of assuming the reader has been with the series from the beginning and failing to let new readers in on the series secrets; the second, of making grotesque soap operas out of the basic series format in an attempt to remain fresh. It's hard to find a clunker in the Kaminsky canon, so believable are his bizarre situations and quirky characters. This mystery brings back Hollywood private-eye Toby Peters, newly partnered in confidential investigations with his ex-LAPD cop brother. From the 1930s, Toby has trolled Hollywood back lots and back alleys in cases involving the likes of Munchkins, stuntmen, studio bosses, Cary Grant, and Joan Crawford. Now it's 1944, and the famous magician Harry Blackstone, doing his wartime bit by performing for the USO, reaches out to Toby and his brother because someone is threatening to kill him if he doesn't reveal the secrets to his illusions. The attempts on Blackstone's life are staged like magic tricks themselves. And the book resembles one of Blackstone's own boxes made out of cunningly crafted compartment--in this case, wartime Hollywood, the history of magic, Blackstone, and his illusions, all opening and shutting on a plot that piles up bodies and puzzles. A marvelous magic trick of a mystery. --Connie Fletcher Copyright 2004 Booklist

Joined by his recently retired brother Phil Pevsner, 1940s p.i. Toby Peters (Mildred Pierced, 2003, etc.) proves that the hand really isn't quicker than the eye when he plays bodyguard to a famous magician. Harry Blackstone isn't so much scared as piqued by anonymous threats to sabotage his act unless he reveals the secrets of his illusions. But just to make sure his lovely assistant doesn't really get sawed in half, he hires Pevsner and Peters to check things out backstage. Sure enough, a vital safety switch goes missing from Blackstone's buzz saw, forcing Toby to make a daring last-minute rescue--only to find blackmailing con man Robert R. Cunningham shot to death in a dressing room. As the threats continue, suspicion falls on rival conjurer Calvin Ott, who under his stage name Marcus Keller arranges a testimonial dinner for Blackstone and offers to present the diners with "the death of a magician." Unfortunately for Ott, the dead magician turns out to be him. So Toby and Phil, along with four-foot-tall Gunther Wherthman, ex-wrestler Jeremy Butler, and demented dentist Sheldon Minck, all have to sweat in their rented tuxedos while the LAPD's John Cawelti tries to establish who saw what in a room full of illusionists. The Peters entourage, barreling ahead full tilt, provides just enough insanity to enliven a routine whodunit. Copyright ©Kirkus Reviews, used with permission.
More book reviews at iDreamBooks.com