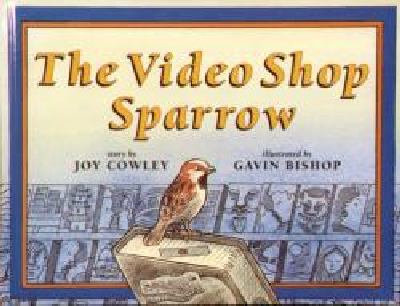 Picture story book for children. -When George and his brother Harry go to return their video on New Year's Day, they find the shop closed and a little sparrow trapped inside. Suggested level: junior, primary.

Gr 1-4-Arriving at the video store, George and Harry learn that it will be closed for two weeks. They spy a bird flying about inside and realize it will die if locked up for that long. They inquire in the restaurant next door about the owner's whereabouts and tell what they've seen. A waitress tells them, "It's only a sparrow. Plenty more where that came from." Their father has the same reaction when the boys approach him. Looking to the police for help, they meet a grouchy officer who tells them that the creature "can tweet in bird heaven." Finally, while holding a press conference, the mayor sees the brothers and asks what they want. Upon hearing, she tells the journalists, "Forget about the road taxes...Is it a story you want?...come with me and I will give you a story." The sparrow is saved, the mayor poses for the cameras, and she's quoted as saying, "no job was too small for a caring mayor." A caring mayor? Or a calculating one? The question of exactly what lessons the boys learned will intrigue readers and make this multilayered picture book perfect for a discussion of morals and values. Bishop's warm and expressive watercolor-and-ink renderings are fully integrated with the text and help carry the story to its conclusion.-Lisa Gangemi Krapp, Rockville Centre Public Library, NY (c) Copyright 2010. Library Journals LLC, a wholly owned subsidiary of Media Source, Inc. No redistribution permitted.

Ages 7^-9, younger for reading aloud. Although marred by sketchy, washed-out illustrations, this New Zealand import imparts a valuable lesson about the importance of every single life. When young George and Harry take a New Year's Day ride to the video store, they discover that it will be closed for two weeks and a sparrow has been trapped inside. Unfortunately, they can't interest anyone else in the bird's plight: not their father or mother or even the police ("It can tweet in bird heaven."). What to do? Readers on this side of the equator may gain some cultural insight from the mix of Christmas decorations and the hot-weather gear everyone sports in Bishop's suburban scenes, but his thick-featured, ghostly pale figures sometimes bear exaggerated expressions, and colors and shadows are brushed in awkwardly. In the end, the brothers appeal to the town mayor, who, knowing a photo op when she sees one, has the shop opened and the bird released. Bland plotting, yes--but Cowley makes her point without hammering it home, and the boys' compassion in the face of adult indifference is all the more admirable for being so stubborn. --John Peters

On New Year's, two brothers see a sparrow trapped inside a store and a sign on the door: WILL REOPEN JANUARY 13. Neighbors, parents, and police all tell them the sparrow's plight is no big deal, but the two persist and finally get help from the publicity-hungry mayor. Cowley's text realistically captures the kids' alarm and the adults' nonchalance; Bishop's illustrations reflect the story's tension and lack of sentimentality. From HORN BOOK Spring 2000, (c) Copyright 2010. The Horn Book, Inc., a wholly owned subsidiary of Media Source, Inc. No redistribution permitted.

Skateboarding on New Year's Day, sunflowers drooping over a fence hung with a holiday wreath, rooftop Santa Claus decorations'these things are not only possible but probable in New Zealand, where this story is set. Also probable, given the ubiquity of sparrows, is the conflict the book's young protagonists, Harry and George, must resolve. The problem is that a sparrow, trapped in the video store and frantic for release, seems doomed. The store's owner is on a two-week vacation and no adult in town cares much about sparrows because there are so many of them. But the two boys can't ignore the sparrow, with its ``special trusting look,'' and when the town's mayor, Mrs. McKenzie, recognizes a photo op, she steps in to rescue the sparrow. As for Harry and George, they've begun to notice that all sparrows have that special trusting look. This tale is well- plotted, although the outcome is never in doubt (and why can't the boys pour bird seed or even water through the mail slot, where they drop off their video?). The illustrations, largely for their glimpse of life in New Zealand, combine with a text for a book that is inoffensive, competent, yet ultimately uninspiring. (Picture book. 5-7)
More book reviews at iDreamBooks.com