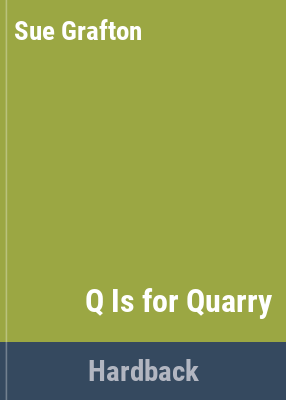 Q is for quarry / Sue Grafton.

Eighteen years after the body of an unidentified young woman is discovered in a quarry off California's Highway 1, two police detectives nearing retirement enlist Kinsey Millhone's aid to help identify the long-ago murder victim.Kinsey Millhone's attempt to identify a woman whose body was found 18 years ago off California's Highway 1 becomes a high-risk hunt for her killer.

Inspired by the actual unsolved murder of a young woman in Santa Barbara County, Grafton's latest (after P Is for Peril) has private investigator Kinsey Milhone on a quest for justice denied for 18 years. In the summer of 1969, the decomposed corpse of a young white female was discovered near a quarry off California's Highway 1. Her hands had been bound and her throat slashed. Despite months of investigation, "Jane Doe" remained unidentified and the case unsolved. Now years later, Con Donlan and Stacey Oliphant, the police officers who had found her body, want Kinsey to help them to identify the girl and find her killer before they retire. At the same time, having learned that the body was found on a ranch owned by her estranged grandmother, Kinsey journeys into the past to retrace her own family history. Once again, an intriguing plot, fully drawn characters, and wry humor prove why Grafton's series is one of the best. With nine letters to go, one hopes she can keep it up. For all mystery collections. [Previewed in Prepub Alert, LJ 6/1/02.]-Wilda Williams, "Library Journal" (c) Copyright 2010. Library Journals LLC, a wholly owned subsidiary of Media Source, Inc. No redistribution permitted.

Although this latest Kinsey Millhone novel features all of Grafton's tried and true elements of suspense and humor, there's something unusual here: the story-of an unsolved homicide that occurred in 1969-is based on a real event. Grafton became interested in this case, of an unidentified white female whose decomposed body was discovered near a California quarry. While Grafton was writing the novel, Jane Doe's body was exhumed and a forensic artist did the facial reconstruction, in the hopes that seeing the victim's image might trigger someone's memory. Kinsey is pulled into working on the case when her old friend Con Dolan asks for her help as a favor, to help Stacey Oliphant, an aging, ailing policeman, fulfill his dream of solving the mystery of Jane Doe's murder. There's not much to go on, as the case has been cold for years, yet the trio-Kinsey, Dolan and Stacey-persevere; slowly, leads begin to turn up. Kaye gives a fine performance. While she's well accustomed to reading Kinsey (she's been the audiobook reader for the entire series) and performs that part with gusto here, she also deftly handles the craggy old voices of Dolan and Stacey (although at times it's hard to distinguish between them). By turns sassy, professional and heartbreaking, her portrayal of Grafton's beloved heroine will delight fans. Simultaneous release with the Putnam hardcover (Forecasts, Sept. 16). (Oct.) (c) Copyright PWxyz, LLC. All rights reserved

Kinsey Millhone bonds over junk food with two ailing old-timers in a novel that combines an 18-year-old unsolved murder case with a subtle but heartfelt rumination on aging. About to turn 37, with the daunting task of trying, ineffectually, to decorate her newly rented, mildewed office, Kinsey is suffering from a general malaise. Then Lieutenant Con Doyle, currently sidelined by a series of heart attacks, contacts her about his investigation of a cold case involving the murder of a female adolescent who was never identified. Doyle wants to help out his old mentor, 73-year-old bachelor Stacey Oliphant, who is ill with cancer. Over a lunch of salami sandwiches chased by shots of Old Forrester (Doyle's self-prescribed healthy-heart eating program), Doyle talks Kinsey into coming on board. The three follow many fruitless leads and interview a host of desperate, dysfunctional small-town denizens before solving the case. As usual, Grafton combines in-depth, complex characterizations with a fluid narrative style; she also gives us a model portrait of how to face aging and illness with grace and humor. Grafton appends an interesting author's note detailing the facts of the real (still-unsolved) case that inspired her story. --Joanne Wilkinson

Back in 1969, Det. Stacey Oliphant of the county sheriff's office and Lt. Con Dolan of Santa Teresa Homicide discovered the body of a young woman in Grayson Quarry who was never identified. Now that Stacey's been diagnosed with lymphoma, Con, himself sidelined by his heart condition, asks Kinsey Millhone (P Is for Peril, 2001, etc.) to do the legwork for the aging buddies as they struggle one last time to close the case. It's an impossible job. Whatever legal or medical records might have helped are long gone (though Kinsey's hopeful that Jane Doe's distinctive teeth may still tell a story); potential witnesses' memories have faded or been addled by repeating the same story too many times; and the two lead investigators are at serious risk, not from the perp, but from death of natural causes. The convoluted, fact-based tale-studded with masterful portraits of the dying detectives, a couple of dead-alive ex-cons, and the might-as-well-be-dead suspects-has run half its course before the victim is identified as a wild high-school girl who slept around so indiscriminately and exhaustively that half the population of little Quorum, California, seems to think her violent death was no more than she deserved. Despite a bumper crop of Q's, the late-arriving whodunit is tangled and routine, and Kinsey's latest inconclusive flirtation with her own past-the owner of Grayson Quarry turns out to be the grandmother she's never spoken to-awaits resolution, perhaps in R Is for Relatives. First printing of 650,000; Book-of-the-Month Club featured selection; Doubleday Book Club/Literary Guild/Mystery Guild main selection; author tour
More book reviews at iDreamBooks.com