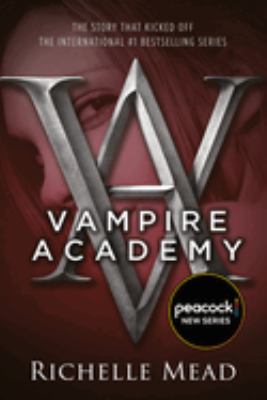 The international number 1 bestselling Vampire Academy series by Richelle Mead is now a major motion picture.
Read it before it hits cinemas in 2014!
The astonishing first book that kicked off the international bestselling series.
ONLY A TRUE BEST FRIEND CAN PROTECT YOU FROM YOUR IMMORTAL ENEMIES . . .
Lissa Dragomir is a Moroi princess- a mortal vampire with a rare gift for harnessing the earth's magic. She must be protected at all times from Strigoi; the fiercest vampires - the ones who never die. The powerful blend of human and vampire blood that flows through Rose Hathaway, Lissa's best friend, makes her a Dhampir. Rose is dedicated to a dangerous life of protecting Lissa from the Strigoi, who are hell-bent on making Lissa one of them.
After two years of freedom, Rose and Lissa are caught and dragged back to St. Vladimir's Academy, a school for vampire royalty and their guardians-to-be, hidden deep in the forests of Montana. But inside the iron gates, life is even more fraught with danger . . . and the Strigoi are always close by.
Rose and Lissa must navigate their dangerous world, confront the temptations of forbidden love, and never once let their guard down, lest the evil undead make Lissa on of them forever . . .
Reviews for the Vampire Academy series

'Unique and mesmerizing . . . this little gem is sure to be a hit . . . Readers will bite on this series for some time to come.' VOYA

St Vladimir's Academy isn't just any boarding school - it's a hidden place where vampires are educated in the ways of magic and half-human teens train to protect them. Rose Hathaway is a Dhampir, a bodyguard for her best friend Lissa, a Moroi Vampire Princess. They've been on the run, but now they're being dragged back to St Vladimir's - the very place where they're most in danger...Rose and Lissa become enmeshed in forbidden romance, the Academy's ruthless social scene, and unspeakable night-time rituals. But they must be careful lest the Strigoi - the world's fiercest and most dangerous vampires - make Lissa one of them forever.

Two years after a horrible incident made them run away, vampire princess Lissa and her guardian-in-training Rose are found and returned to St. Vladimir's Academy, where one focuses on mastering magic, the other on physical training, while both try to avoid the perils of gossip, cliques, gruesome pranks, and sinister plots.

Two years after a horrible incident made them run away, vampire princess Lissa and her guardian-in-training Rose are found and returned to St. Vladimir's Academy, where one focuses on mastering magic, the other on physical training, while both try to avoid the perils of gossip, cliques, gruesome pranks, and sinister plots.

Gr 9 Up-Lissa and Rose, both 17, have a special bond, as is fitting for a vampire princess and her guardian-in-training, but theirs is closer than most. Lissa is Moroi-a race of living vampires that is persecuted by the deadly Strigoi, undead vampires that feed from and kill Lissa's kind. Rose is a dhampir-a half-vampire-half-human whose role is to guard the Moroi, at a time when both races are dwindling. Vampire opens with the girls on the lam from Montana's St. Vladimir's Academy. Lissa's power to heal is extremely rare and can drive one to madness. At the warning of a teacher, the pair run before Academy elders can take Lissa away to prevent her self-destruction. Through flashbacks and discussions between the girls, readers learn that while living among humans for two years, the Moroi teen illicitly sated her need for blood by feeding from Rose instead of from human donors. When the girls are caught and returned, they are watched closely, while hiding what happened when they were away. They discover attractions to those they should not be involved with and fight against suspicion and sinister forces that want to abuse Lissa's gift. All the while, their priorities and loyalty to each other are tested in the face of danger. This truly engaging and believable novel is on a par with Stephenie Meyer's "Twilight" books (Little, Brown), but is more risqui. Fans of Melissa de la Cruz's "Blue Bloods" books (Hyperion) will enjoy this work.-Corinda J. Humphrey, Los Angeles Public Library (c) Copyright 2010. Library Journals LLC, a wholly owned subsidiary of Media Source, Inc. No redistribution permitted.

After two years on the run, best friends Rose, half-human/half-vampire, and Lissa, a mortal vampire princess, are caught and returned to St. Vladimir's Academy. Up until then, Rose had kept Lissa safe from her enemies; school, however, brings both girls additional challenges and responsibilities. How they handle peer pressure, nasty gossip, new relationships, and  anonymous threats may mean life or death. Likable narrator Rose hides doubts about her friend behind a tough exterior; orphan Lissa, while coping with difficult emotional issues such as depression and survivor's guilt, uses her emerging gifts for good. Mead's absorbing, debut YA novel, the first in a new series, blends intricately detailed fantasy with a contemporary setting, teen-relevant issues, and a diverse, if sometimes sterotyped, cast of supporting characters. Occasional steamy sex and a scattering of vulgar language demand mature readers, but teens able to handle the edgy elements will speed through this vamp story and anticipate the next installment.--Rosenfeld, Shelle Copyright 2007 Booklist
More book reviews at iDreamBooks.com