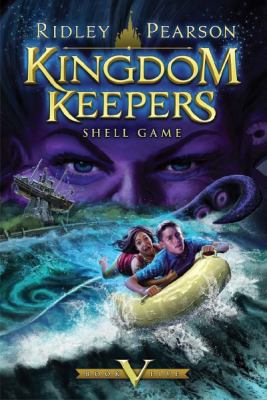 Summary: The Kingdom Keepers have their hands full when, during the inaugural cruise of the Disney ship, Fantasy, to exotic locations, they discover that the Overtakers have infiltrated the cast, stolen a journal that belonged to Walt Disney himself, and plan to unleash a powerful evil, the Chernabog.
Tags from this library: No tags from this library for this title. Log in to add tags.
Fiction notes: Click to open in new window

As the Disney Fantasy joins the cruise fleet, a special treat is in store for guests aboard its inaugural sail from Cape Canaveral to Los Angeles: the Disney Host Interactive teenage guides will be part of the Fantasy crew.

Finn, Maybeck, Charlene, Willa, and Philby are to attend the cruise as celebrity guests, and to perform a ribbon cutting for the DHI server to go live. The Fantasy is now the most advanced cruise ship in the world.

But all is not right belowdecks. Strange things are happening. Unexplained phenomena. Only the Kingdom Keepers know the truth behind their invitation: nearly every Disney villain is represented onboard the new ship: whether on its decks or in its theaters. It's believed the Overtakers have infiltrated the cast and are "stowaways." Worse: it is believed they have stolen an important journal that once belonged to Walt Disney himself--Finn has been having dreams about this--and that some kind of mission is planned.

The ship sets sail filled with enthusiastic guests and crew, and the battle is on in new and exotic arenas: the beaches of Castaway Cay, the caves of Aruba, the locks of the Panama Canal, Costa Rica's rain forest zip line . . . But the end game is far more complicated and intense than anything the Kingdom Keepers had planned on. If the Overtakers get their way, a power will be unleashed that no one will have the ability to vanquish: Chernabog, dormant for years, is about to have his full powers restored. . . .

The Kingdom Keepers have their hands full when, during the inaugural cruise of the Disney ship, Fantasy, to exotic locations, they discover that the Overtakers have infiltrated the cast, stolen a journal that belonged to Walt Disney himself, and plan to unleash a powerful evil, the Chernabog.

Gr 6-8-In Ridley Pearson's fifth title (Hyperion, 2012) in the series, Finn, Philby, Maybeck, Charlene, and Willa are now in high school and still trying to save Disney World from the evil Overtakers. This time, their adventures take them aboard the maiden voyage of Disney's newest ship, Disney Dream. The Overtakers have stolen one of Walt Disney's personal journals and are probably using information from it to launch their next attack. Danger finds the Keepers as they spy on the Overtakers' new recruits and attempt to locate the wicked Maleficent. Although new advances in their holograms allow them to take more risks and perform more efficiently, the Keepers put themselves in jeopardy once again in order to keep the Disney legacy safe. MacLeod Andrews's talented voice interpretations allow listeners to more easily follow the dialogue and jumps in the plot. He successfully changes his voice between male and female characters and provides various accents, including Philby's Australian and Tia Dalma's Jamaican tones. Jazzy techno music cues the beginning and ending of each disk. This entertaining production is sure to please fans of the series and may even garner a few new ones.-Jill Webb, Farmington Community Library, MI (c) Copyright 2012. Library Journals LLC, a wholly owned subsidiary of Media Source, Inc. No redistribution permitted.

The Kingdom Keepers continue their battle against the growing forces of the Disney villains, on land and on the cruise ship Dream. While doing their official duty as Disney hosts, they must also retrieve a vital notebook stolen from the Disney vaults--and Finn's kidnapped mother. A more than usually padded and plodding installment in the popular series. (c) Copyright 2012. The Horn Book, Inc., a wholly owned subsidiary of Media Source, Inc. No redistribution permitted.
More book reviews at iDreamBooks.com