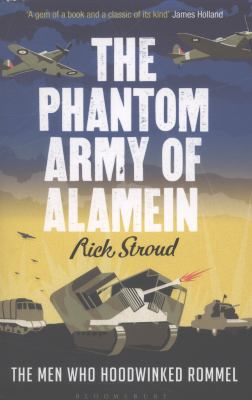 The phantom army of Alamein : how Operation Bertram and the Camouflage Unit hoodwinked Rommel / by Rick Stroud.

In 1940 a group of artists, sculptors, film makers, theatre designers and set painters came together to form the Camouflage Unit. They were so successful that in August 1942 Montgomery ordered them to to hide the preparations for the Battle of Alamein. In six weeks two entire divisions were conjured from the sand, while real units, stores and men vanished into thin air. Then, right in front of the German's eyes they made 600 tanks disappear and reappear fifty miles away disguised as lorries. Rommel had been bamboozled by an army made of nothing but string and straw and bits of wood.