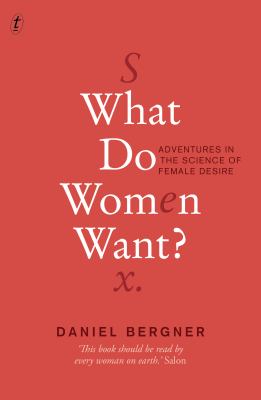 What do women want? : adventures in the science of female desire / Daniel Bergner.

Women are the monogamous sex. Women crave intimacy and emotional connection. Women don't want sex with strangers. Right? Wrong. Could 'the fairer sex' in fact be more sexually aggressive and anarchic than men? In What Do Women Want? Adventures in the Science of Female Desire , critically acclaimed journalist Daniel Bergner looks at the evidence. Recent research, he finds, dismantles the myths to reveal an unprecedented portrait of female lust- the triggers, the fantasies, the mind-body connection (and disconnection), the reasons behind the loss of libido and, most revelatory, that this loss is not inevitable.

Critically acclaimed journalist Daniel Bergne disseminates the latest scientific research and paints an unprecedented portrait of female lust: the triggers, the fantasies, the mind-body connection (and disconnection), the reasons behind the loss of libido, and, most revelatory, that this loss is not inevitable. Bergner asks: Are women actually the less monogamous gender? Do women really crave intimacy and emotional connection? Are women more disposed to sex with strangers and multiple pairings than either science or society have ever let on? And is "the fairer sex" actually more sexually aggressive and anarchic than men? While debunking the myths popularized by evolutionary psychology, Bergner also looks at the future of female sexuality. Pharmaceutical companies are pouring billions of dollars to develop a "Viagra" for women. But will it ever be released? Or are we not yet ready for a world in which women can become aroused at the simple popping of a pill? Insightful and illuminating, What Do Women Want? is a deeper exploration of Daniel Bergner's provocative New York Times Magazine cover story; it will spark dynamic debates and discussions for years to come.

Bergner picks up with the questions raised in his previous book The Other Side of Desire, in which a researcher asks provocative questions about female sexual desire. What if the popular belief that females are the more monogamous, relationship-oriented gender isn't true? What if females are wired to be less monogamous than males? Taking a position similar to Christopher Ryan's Sex at Dawn, Bergner unravels vignettes from the latest research. Along the way, readers are introduced to the sexual desires of monkeys and rats, the waning of such feelings in marriage, and even the gamble for pharmaceutical research companies to be first in finding a pill that awakens female sexual desire. VERDICT There is no question that readers unfamiliar with female desire will find this book engaging, even startling, as a different image of female sexuality emerges. Nonetheless, Bergner's pop-science journalism glosses over the subject's complexity, omitting evidence of evolutionary psychology and discussion with credible critics. Recommended to readers interested in human sexuality.-Scott Vieira, Sam Houston State Univ. Lib., Huntsville, TX (c) Copyright 2013. Library Journals LLC, a wholly owned subsidiary of Media Source, Inc. No redistribution permitted.

Suspicious of evolution-based assumptions about female desire-such as the views that women prefer monogamy and that women find emotional connections key to physical satisfaction-Bergner (The Other Side of Desire) looks to past and current scientific and social research, as well as interviews with everyday women, to uncover the truth behind female sexuality. In accessible and informative prose, the author addresses topics as wide-ranging as scientific studies of female rats and monkeys, the implications of biological differences between the sexes (does the fact that women have a limited quantity of reproductive material-as opposed to men's regenerative supply of sperm-offer insight into the discrepancies between the male and female libidos?), the role of narcissism in desire, the effects of orgasm on the brain, and what happens when women-not men-are the ones to switch seats during a speed-dating session. Bergner isn't afraid to take on the most taboo of subjects (such as rape fantasies), but he does so through a critical lens that seeks to reveal the why behind the phenomenon under investigation. This page-turning book will have readers questioning some of their most ingrained beliefs about women, men, society, and sex. Agent: Suzanne Gluck, William Morris Endeavor. (June) (c) Copyright PWxyz, LLC. All rights reserved.

Accessible, engaging inquiry into the boundaries of the female libido by New York Times Magazine contributor Bergner (The Other Side of Desire, 2009, etc.). The author's multifaceted exploration travels across varied terrain, ranging from the varieties of female orgasms and the effect of monogamy on lust to the development of a female desire drug. Bergner combines into a cogent whole vast amounts of information on female sexuality gleaned from interviews, academic papers, scores of books and data gathered from conversations with researchers. He begins with Meredith Chivers, whom Bergner describes as a bold sexologist and a careful statistician whose always-scrupulous work explores women's primal and essential selves. One of the author's provocative conclusions, arrived at after years spent talking with Chivers and her subjects, explodes one of society's ingrained concepts: "Women are supposed to be the standard's more natural allies, caretakers, defenders, their sexual beings more suited biologically, to faithfulness. We hold tight to the fairy tale." Bergner devotes a chapter to the varied ways female sexuality has been perceived since classical times, then probes societal and cultural mores that have pegged women as the less lustful gender. Using scientific studies as a scaffolding, he translates data from studies performed on monkeys and rats, explaining how its interpretation over the years has negated information regarding female sexuality. "What science had managed to miss in the monkeys--what it had effectively erased--was female desire," he writes. In another example of his adroit translation of technical material into entertaining and erudite reading for curious readers, the author distills a highly entertaining chapter on speed dating from a 2009 article titled, "Arbitrary social norms influence sex differences in romantic selectivity." Stylishly written and cogently organized, making it easy and rewarding for lay readers to understand and appreciate some fairly complex science.]] Copyright Kirkus Reviews, used with permission.
More book reviews at iDreamBooks.com