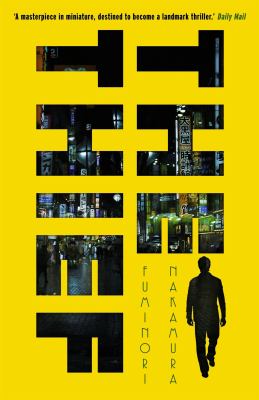 The thief / Fuminori Nakamura ; translated from the Japanese by Satoko Izumo and Stephen Coates.

Nishimura is a seasoned pickpocket, weaving through Tokyo's crowded streets, in search of potential targets. He has no family, no friends, no connections . . . But he does have a past, which finally catches up with him when his old partner-in-crime reappears and offers him a job he can't refuse. Suddenly, Nishimura finds himself caught in a web so tangled and intricate that even he might not be able to escape.

Taut, atmospheric and cool, The Thief will steal your breath away.

Handpicked by Nobel laureate Kenzaburo_ O_ e for his eponymous O_ e Prize in 2009, Nakamura-who has also garnered many of Japan's other top awards (the Noma Literary New Face Prize, the coveted Akutagawa Prize)-makes his stateside debut-in-translation. Disguised as fast-paced, shock-fueled crime fiction, this work resonates even more as a treatise on contemporary disconnect and paralyzing isolation. The protagonist-a virtuoso pickpocket with Robin Hood tendencies-agrees to participate in what initially seems to be a simple robbery for a lucrative fee, only to become inescapably embroiled with the Tokyo crime world's omnipotent elite. Meanwhile, his last tenuous connection to society is a desperate young boy forced into clumsy shoplifting by his addicted, prostitute mother. With nowhere left to run, the thief must barter his life with a labyrinthine test of his thieving prowess. VERDICT Mystery/crime aficionados with exacting literary standards, as well as readers familiar with already established-in-translation Japanese writers Miyuki Miyabe (Shadow Family), Natsuo Kirino (Out; Grotesque), and Keigo Higashino (The Devotion of Suspect X), will especially enjoy discovering Nakamura.-Terry Hong, Smithsonian BookDragon, Washington, DC (c) Copyright 2012. Library Journals LLC, a wholly owned subsidiary of Media Source, Inc. No redistribution permitted.

Nakamura makes his English-language debut with this compelling look at a Tokyo pickpocket's life. The thief, eventually identified as Nishimura, leads an anonymous existence dependent on his ability to become as physically close as possible to others without drawing the slightest attention. Crime fans won't be surprised when outside entanglements compromise the peerlessly expert and solo Nishimura. While taking a protective interest in a prostitute's young son, a budding thief in his own right, Nishimura also becomes involved, at his former partner Ishiwaka's behest, with a home invasion. After the raid leaves an elderly politician dead, Nishimura finds himself under the thumb of its planner, the mysterious criminal mastermind Kizaki. Nakamura's memorable antihero, at once as believably efficient as Donald Westlake's Parker and as disaffected as a Camus protagonist, will impress genre and literary readers alike. (Mar.) (c) Copyright PWxyz, LLC. All rights reserved.

The titular thief is a deft Tokyo pickpocket. He's also a human cipher who finds wallets that he doesn't remember lifting and who is preoccupied, even vaguely menaced, by imposing towers that he sees in dreams and throughout the city. He's a loner who only mentions two people in his life: his professional mentor, Ishikawa, and Saeko, a woman who bore his child but is now dead. The thief is drafted into an armed robbery by Kizaki, a vicious gangster who extolls the ultimate pleasure of deciding the time and place of an underling's murder. The thief is almost entirely devoid of affect until Kizaki turns on him. Many Western crime lovers may be put off by the book's utter foreignness, but it is strangely, compulsively readable for its portrait of a dark, crumbling, graffiti-scarred Tokyo and the desire to understand the mysterious thief. This debut novel recently won the Oe Prize, one of Japan's most prestigious literary awards.--Gaughan, Thomas Copyright 2010 Booklist
More book reviews at iDreamBooks.com