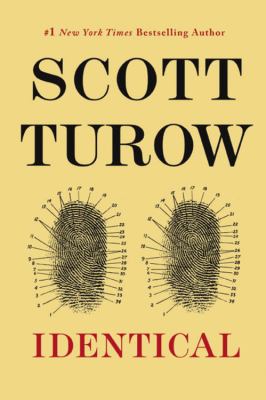 Genre/Form: Thrillers (Fiction) | Detective and mystery fiction.DDC classification: 813/.54
Contents:
Een man gelooft niet dat degene die na 25 jaar gevangenis nu vrijkomt zijn zus heeft vermoord.
Summary: A mayoral candidate's brother is released from prison 25 years after pleading guilty to the murder of his girlfriend, a situation that leads to the re-opening of the case.
Tags from this library: No tags from this library for this title. Log in to add tags.
Fiction notes: Click to open in new window

State Senator Paul Giannis is a candidate for Mayor of Kindle County. His identical twin brother Cass is newly released from prison, 25 years after pleading guilty to the murder of his girlfriend, Dita Kronon. When Evon Miller, an ex-FBI agent who is the head of security for the Kronon family business, and private investigator Tim Brodie begin a re-investigation of Dita's death, a complex web of murder, sex, and betrayal-as only Scott Turow could weave-dramatically unfolds...

A mayoral candidate's brother is released from prison 25 years after pleading guilty to the murder of his girlfriend, a situation that leads to the re-opening of the case.

Best-selling author Turow's (Innocent; Presumed Innocent) personal and professional fascination with identical twins inspired this story, based loosely on the myth of Castor and Pollux, of Paul and Cass Giannis and the convoluted relationship between their family and their longtime neighbors the Kronons. In 2008, Paul is running for mayor of Kindle County, while Cass is being released from the penitentiary, having served 25 years for the murder of his girlfriend Dita Kronon. However, Hal Kronon, Dita's grieving brother, hires ex-FBI agent Evon Miller and Tom Brodie, a former homicide detective, to reinvestigate her murder. Dr. Hassam Yavem, an expert in genetic research, conducts a thorough DNA analysis and reveals startling results-unearthing long-buried secrets involving family betrayal, incest, and chilling deceit. VERDICT Turow's well-crafted legalese does nothing to hide the bizarreness of this tale of identical twins. The roller-coaster events that unfold within and between these intertwined families slowly reveal off-the-wall and improbable behaviors. Simply too much to believe. [See Prepub Alert, 4/1/13.]-Jerry P. Miller. Cambridge, MA (c) Copyright 2013. Library Journals LLC, a wholly owned subsidiary of Media Source, Inc. No redistribution permitted.

Bestseller Turow (Innocent) is not at the top of his game in this contrived whodunit. In 2008, Paul Gianis, an Illinois state senator, is leading in the race to become mayor of Kindle County, but a decades-old tragedy threatens to scuttle his political ambitions. In 1982, Dita Kronon, the girlfriend of his identical twin brother, Cass, was beaten to death. Cass pleaded guilty to the crime, but on his release after 25 years in prison, Dita's affluent brother, Hal, alleges that Paul was also involved in the murder. Paul files a lawsuit for defamation, hoping to minimize the damage to his political prospects, but he can't stop Hal's investigators from unearthing deeply buried secrets. Assured prose (e.g., "Mario Cuomo said you campaign in poetry and govern in prose, but as far as Paul could tell they were both trips to the abattoir, just different entrances") compensates only in part for an overly intricate solution likely to disappoint even diehard Turow fans. 5-city author tour. Agent: Gail Hochman, Brandt & Hochman. (Oct.) (c) Copyright PWxyz, LLC. All rights reserved.

Turow continues his obsession with innocence (his breakout first novel, Presumed Innocent, 1987, was followed after 20 years by Innocent). In this strained reworking of the theme, the mystery centers on identical twins, Cass and Paul Giannis, who both attend a party at the home of their father's greatest rival, Zeus Kronon, in 1982. The mythological references are many, most seeming to underscore the simple point that the book is about twins. The pivot for the action is the 2008 release from prison of Cass, who confessed to the 1982 murder of his girlfriend Athena Kronon (daughter of Zeus). Cass has been destroyed by prison; Paul is a state senator and mayoral candidate. Matters get further complicated when an ex-FBI agent and a PI reopen the murder case on their own, convinced that Cass is innocent. Much of this book is weighed down by unnecessary accounts of characters' lives from childhood on. The interesting part has to do with the forensics of fingerprinting and DNA, though the 2008 time frame limits what can be done with that. All in all, a disappointment from a much-loved author. HIGH-DEMAND BACKSTORY: Turow may have drunk from the well of innocence one too many times, but his fans are still thirsty.--Fletcher, Connie Copyright 2010 Booklist

Much-practiced legal proceduralist Turow (Innocent, 2010, etc.) steps onto Joseph Campbell turf in his latest mystery. Turf is everything in the world Zeus Kronon--a charged name, that--has carved out for himself in Kindle County, turf that, of course, figures in Turow's oeuvre as Yoknapatawpha County figures in Faulkner's. Rolling in drachmas, he has just one problem: a wild maenad of a daughter, full name Aphrodite ("There have not been many occasions he has seen Dita when she is not smashed"), who has eyes not just for one of a pair of twin brothers, Paul and Cass Gianis, but both. That spells trouble, as twins in mythology always do. Fast-forward a few decades. Cass has been doing time for her murder, while Paul, "followed by two scrubbed young underlings," re-enters the scene as a legal whiz and rising politico. Enter the Sapphic former FBI agent Evon Miller, who, working for real estate magnate Hal (that is, Herakles) Kronon--and who minds mixing Shakespeare with Aeschylus?--is determined to get to the bottom of whether Cass or Paul did poor Dita in so brutally. It would spoil the story to do more here than whisper the name Medea in what she eventually turns up. Turow has obvious fun with his mythological conceit, giving, for instance, a local GOP power the sonorous, if unlikely, name Perfectus Elder; and if sometimes the joke wears a little thin, the process of discovery takes nice and sometimes unexpected twists. Amid the supermodernity of DNA tests, the austerity of case law and the tangles of contemporary politics (Hal, horrors, even threatening to vote for Obama), Turow never loses sight of the ancient underpinnings of his story, with a conclusion that places Hal, Zeus, Hermione and Aphrodite in the vicinity of Olympus, their true neighborhood. Classic (in more senses than one) Turow.]] Copyright Kirkus Reviews, used with permission.
More book reviews at iDreamBooks.com