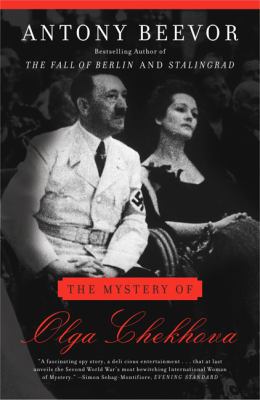 In his latest work, Antony Beevor--bestselling author of Stalingrad and The Battle of Arnhem and one of our most respected historians of World War II--brings us the true, little-known story of a family torn apart by revolution and war. Olga Chekhova, a stunning Russian beauty, was the niece of playwright Anton Chekhov and a famous Nazi-era film actress who was closely associated with Hitler. After fleeing Bolshevik Moscow for Berlin in 1920, she was recruited by her composer brother Lev to become a Soviet spy--a career she spent her entire postwar life denying. The riveting story of how Olga and her family survived the Russian Revolution, the rise of Hitler, the Stalinist Terror, and the Second World War becomes, in Beevor's hands, a breathtaking tale of survival in a merciless age.

Yes, Russian playwright Anton Chekhov's gorgeous niece was an actress in Germany-reputedly Hitler's favorite-but did she really spy for the NKVD? From the author of The Fall of Berlin-1945; with a five-city author tour. (c) Copyright 2010. Library Journals LLC, a wholly owned subsidiary of Media Source, Inc. No redistribution permitted.

Hitler admired her for her ?cosmopolitan sophistication,? but Olga Chekhova, niece of Russian playwright Anton Chekhov, was far too pragmatic to lose herself to the charms of a powerful man. Drawing on numerous interviews, articles and books, Beevor (Stalingrad) concludes that the great icon of Nazi cinema never forgot where she came from and worked as a Soviet agent while reaping the rewards of stardom under the Third Reich. Chekhova, a Russian of German descent, could not help but see the benefits of serving the motherland. As an emigree in Berlin, she was already held suspect by the Soviets and hoped her spying for them would result in favorable treatment of her family in Moscow. Recruited by her brother, Lev, a Soviet composer, Chekhova became a friend and confidante to men like Goebbels, while serving Stalin by gauging Germany?s interest in war against Russia. An accomplished documentarian, Beevor has written an absorbing and expansive story, not just of an actress/spy, but of revolution and of the stark changes in Russian society that occurred between the late 19th and early 20th centuries. He places Moscow and Berlin side by side and shows how the divergent trajectories of the regimes could intersect only on the battlefield. Amid the history lesson is the glowing and graceful Olga Knipper-Chekhova, a woman made wiser by a bad marriage and toughened by civil war. As Beevor illustrates, survival was perhaps her most pronounced motivation, and it guided her well, from the day in 1920 when she left the blight of Soviet Russia behind with nothing more than a diamond ring smuggled under her tongue to her death in 1980. (Sept.) Copyright 2004 Reed Business Information.

The award-winning author of Stalingrad (1998) has turned his attention to the well-known Nazi-era actress and her links with the Soviet government before, during, and after World War II. Chekhova (1897-1980) was born Olga Knipper in Russia. Her aunt, also Olga Knipper and a famous actress in the Moscow Art Theater, was married to playwright Anton Chekhov. Further intertwining the two families, the second Olga Knipper married the actor Mikhail Chekhov, Anton's nephew. In the early 1920s, Olga Chekhova, long divorced from Mikhail and with a daughter, immigrated to Germany to escape the poverty and atmosphere of the Soviet Union. She quickly established herself in the German film industry, where she made more than 100 films. There is also some evidence that by the 1930s she was a spy or at the very least a mole in place to possibly aid and abet in Hitler's assassination. Beevor crafts a good story. --Frank Caso Copyright 2004 Booklist

Did Anton Chekhov's niece, a major Nazi film star, spy for Mother Russia during WWII? Yes and no, concludes the author of several previous works about Soviet-German conflict. Beevor (The Fall of Berlin, 2002, etc.) begins with a startling moment in 1945. The Germans have surrendered, the war in Europe is over, and the Moscow Art Theatre is presenting The Cherry Orchard, featuring the playwright's aging widow in her signature role of Ranyevskaya. Taking her bows, the actress sees her niece, Nazi film queen Olga Chekhova (1897-1980), waving at her from the audience. What is she doing there? Beevor then rehearses some family history and introduces us to his other characters. Prominent among them are the playwright's nephew, Misha Chekhov, a gifted actor briefly married to Olga, and her brother, Lev Knipper, before the war a promising composer and during the war a crafty agent and trainer of Soviet alpine forces. In 1921, the divorced Olga fled the murderous Russian civil war for Berlin, her advent coinciding nicely with the rise of German cinema. Her career skyrocketed (Beevor appends a lengthy and impressive list of her films), and she even partied with Chaplin in Hollywood. But after the Nazis took power in the 1930s, Olga found herself playing a particularly unsavory role, with Hitler, Goebbels, et al., as the creepiest of costars. She struggled throughout the war to protect herself, her career, and her family, but Beevor believes she probably did not spy much in any traditional sense, though her relatively comfortable postwar life in West Germany certainly raised eyebrows. The author knows his way around the relevant archives and had access to knowledgeable folks (he interviewed one of Olga 's Nazi lovers), but he concludes that none of this material can provide an entire answer to the question of what services Olga might have given to the Soviets. Literate, lucent, and well researched: a fascinating glimpse into how artists respond as the world explodes around them. (44 b&w illustrations, not seen; 1 map) Copyright ©Kirkus Reviews, used with permission.
More book reviews at iDreamBooks.com