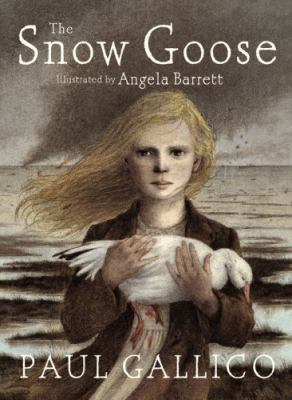 Philip Rhayader lives alone in an abandoned lighthouse on the desolate Great Marsh of Essex. One afternoon, a hauntingly beautiful child, Fritha, visits Rhayader, bringing with her an injured snow goose. At first Fritha is scared of Rhayader, with his sinister hump and crooked hand, but he is gentle and kind and Fritha begins to visit regularly. When the snow goose departs for home, Rhayader is left alone again.

The following winter, the snow goose and Fritha return to the lighthouse. Time passes and one year Fritha is frightened to discover her feelings for Rhayader. But this is 1940 and Rhayader is setting sail for Dunkirk to help the soldiers trapped on the beaches. Fritha never sees Rhayader again. But the story of the saviour with the snow goose passes from soldier to soldier and into legend . . .

Against the backdrop of World War II, friendship develops between a lonely crippled painter and a village girl, when together they minister to an injured snow goose. Suggested level: primary, intermediate, junior secondary.

The Snow Goose by Paul Gallico returns with new illustrations by Angela Barrett. Set in England against the backdrop of WWII and first published in the Saturday Evening Post in 1940, the story centers on the relationship between a British girl and an older recluse as they nurse an injured goose back to health. Gallico's work, exploring friendship, bravery, patriotism and loss, has captivated several generations of readers and inspired two films. (Knopf, $17.99 48p ages 12-up ISBN 9780-375-849787; Sept.) (c) Copyright PWxyz, LLC. All rights reserved

Gr 5 Up-Gallico's classic story of the selflessness of a goodhearted recluse speaks volumes to readers accustomed to a world plagued by self-gratification. Philip Rhayader, a deformed misfit, inhabits an abandoned lighthouse near the English Channel, where he pours out his feelings in his paintings of wildlife and in his care for the birds to which he gives sanctuary. When 12-year-old Frith takes Philip a wounded snow goose, the two form a bond. The goose returns annually, and Philip and Frith grow in their fondness for each other. During World War II, when hundreds are stranded at Dunkirk, Philip, with only the goose as a companion and under heavy enemy fire, tirelessly sails soldiers to safety. Later, when the bird returns alone to the lighthouse, Frith's worst fears are confirmed, and she is left with nothing but Philip's paintings and her memories of a love she never expressed. The beautifully written but somewhat complex text uses unfamiliar vocabulary, and the occasional dialogue is rendered in a strong Essex dialect. However, the overall story is clear, poignant, and still relevant years after its original publication (1940). Barrett's inset and full-page pencil drawings, done in soft pastel tones, perfectly complement the tale's serious nature, capturing the spareness of the landscape and the intensity of the characters' feelings. Sure to provoke thoughtful discussions, this book is an excellent way to introduce a new generation to Gallico's timeless tale.-Nancy Menaldi-Scanlan, LaSalle Academy, Providence, RI (c) Copyright 2010. Library Journals LLC, a wholly owned subsidiary of Media Source, Inc. No redistribution permitted.

Gr. 7-12. Gallico's classic adult novella, first published in 1941 after Dunkirk in the dark times of World War II, is reissued here in a large fiftieth-anniversary illustrated edition. It's the story of a hunchbacked artist, Rhayader, who lives as a recluse in a lonely lighthouse. One day a beautiful young village child asks him to help her save a wounded snow goose. They care for it until it's strong enough to fly away. Then at the time of the Battle of Dunkirk, when every civilian craft in England is called on to rescue soldiers from the sea, Rhayader makes trip after trip in his sailboat through the enemy fire, watched over by the great white snow goose, like an angel of mercy ("white sail and white bird"), until he disappears. The story's a tearjerker, complete with resurrection imagery, and Peck's full-page impressionistic oil paintings are idealized. The land- and seascapes are beautiful, and so is everything else. The hunchback is barely deformed, the girl is angelic (no sign in the pictures of the "grime" Gallico talks about), and in the end she's an exquisite white-clad maiden bidding sad farewell to the pure white bird. It's all as soppy and brave as any melodrama, and lots of kids will love it as much as their parents and grandparents did. The portrayal of an ordinary hero in wartime, as well as the transformation of an outsider who stands tall at last, are enduring in their appeal. (Reviewed Sept. 15, 1992)0679806830Hazel Rochman

After the child Frith brings Philip Rhayader, a hunchbacked artist, an injured snow goose to nurse, an unlikely relationship develops between Frith and Philip. Poignant and moving, this sophisticated tale of friendship and heroism is illustrated with beautiful, impressionistic paintings. From HORN BOOK 1992, (c) Copyright 2010. The Horn Book, Inc., a wholly owned subsidiary of Media Source, Inc. No redistribution permitted.

A tale of exquisite sentimentality and storytelling gains new appeal in Barrett's magical hands. Gallico's tale of the snow goose was first published in 1940, just after the Battle of Dunkirk, when thousands of British and French troops were rescued from the Germans by hundreds of small British boats. Philip Rhayader, a man crippled in body and spirit, lives alone in a lighthouse on the Essex coast, painting pictures and caring for the marsh birds. A wild young girl named Frith brings him an injured snow goose, somehow lost from Canada. He heals the goose, and the girl and bird return to him, warily but faithfully, season after season. Eventually Frith is grown, and feels stirrings of something else for the artist. Then it's the spring of 1940, and Philip goes out across the water, the goose with him, to rescue those trapped soldiers on Dunkirk beach, seven at a time. Fritha knows he's lost then and realizes what she has found, only to lose. Barrett approaches the story with a softness that matches the tone. The drawings are in graphite and pencil, with an occasional piece in color that lightens the mood. A lovely reworking for a whole new audience. (Historical fiction. 11-14) Copyright ©Kirkus Reviews, used with permission.
More book reviews at iDreamBooks.com