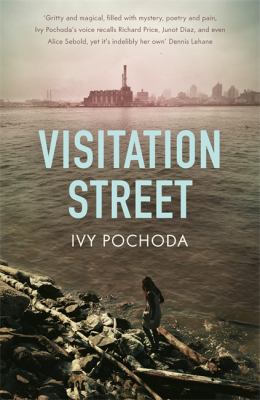 Genre/Form: Thrillers (Fiction) | Detective and mystery fiction.DDC classification: 813.6 Summary: "It's summertime in Red Hook, Brooklyn, a blue-collar dockside neighborhood. June and Val, two fifteen-year-olds, take a raft out onto the bay at night to see what they can see - and then they disappear. Only Val will survive, washed ashore, semi-conscious in the weeds"--Amazon.com.
Tags from this library: No tags from this library for this title. Log in to add tags.

Summer in Red Hook, Brooklyn, a blue collar neighbourhood where hipster gourmet supermarkets push against tired housing projects, and the East River opens into the bay. Bored and listless, fifteen-year-old June and Val are looking for some fun. Forget the boys, the bottles, the coded whistles. Val wants to do something wild and a little crazy: take a raft out onto the bay.

But out on the water, as the bright light of day gives way to darkness, the girls disappear. Only Val will survive, washed ashore semi-conscious in the weeds.

June's shocking disappearance will reverberate in the lives of a diverse cast of Red Hook residents. Fadi, the Lebanese bodega owner, trolls for information about the crime. Cree, just beginning to pull it together after his father's murder, unwittingly makes himself the chief suspect - although an elusive guardian seems to have other plans for him. As Val emerges from the shadow of her missing friend, her teacher Jonathan, Juilliard drop-out and barfly, will be forced to confront a past riddled with tragic sins of omission.

In VISITATION STREET, Ivy Pochoda combines intensely vivid prose with breathtaking psychological insight to explore a cast of solitary souls, pulled by family, love, and betrayal, who yearn for a chance to escape, no matter the cost.

"It's summertime in Red Hook, Brooklyn, a blue-collar dockside neighborhood. June and Val, two fifteen-year-olds, take a raft out onto the bay at night to see what they can see - and then they disappear. Only Val will survive, washed ashore, semi-conscious in the weeds"--Amazon.com.

Pochoda's second novel (after The Art of Disappearing) is the second book from Dennis Lehane's eponymous imprint at Ecco (after Attica Locke's The Cutting Season), and it's easy to see why he's throwing his significant weight behind her work. Set in the Red Hook section of Brooklyn, the novel opens on a warm summer evening when 15-year-old Val and June push a small pink raft onto the bay and set sail. Only Val makes it back to shore, and as the resulting drama unspools as readers meet a full cast of utterly believable characters including Fadi, a shopkeeper-turned-newsman; Cree, a local boy who winds up targeted by the police; and Jonathan, a music teacher who gets entangled in the mystery of June's disappearance. It's an opera set in one small community, and as Val struggles to cope with the loss of her friend and the neighborhood characters play their parts, large and small, Pochoda's riveting prose will keep readers enthralled until the final page. VERDICT The prose is so lyrical and detailed that readers will easily imagine themselves in Red Hook. A great read for those who enjoy urban mysteries and thrillers with a literary flair. [See Prepub Alert, 1/14/13; see also an interview with Lehane about his new imprint in Kristi Chadwick's Mystery Genre Spotlight feature, LJ 4/15/13.-Ed.]-Amy Hoseth, Colorado State Univ. Lib., Fort Collins (c) Copyright 2013. Library Journals LLC, a wholly owned subsidiary of Media Source, Inc. No redistribution permitted.

Exquisitely written, Pochoda's poignant second novel examines how residents of Brooklyn's Red Hook neighborhood deal with grief, urban development, loss, and teenage angst. In a fit of boredom, 15-year-old best friends Val Marino and June Giatto take a raft out on the bay one July evening, but only Val returns, her unconscious body washed up on the shore. June's disappearance and what might have happened on the raft become the linchpin for Fadi, a Lebanese native who wants his bodega to be the pulse of neighborhood news; Jonathan Sprouse, a Julliard dropout with dark secrets; and 18-year-old Cree James, a kid from the projects who longs for a better life but remains stymied by his father's murder. Pochoda (The Art of Disappearing) couples a raw-edged, lyrical look at characters' innermost fears with an evocative view of Red Hook, a traditionally working-class area of Brooklyn undergoing gentrification that still struggles with racism and the aftermath of drug violence. By the end, the gap between "the front" of Red Hook with its well-tended streets near the waterfront and "the back" with its housing projects remains wide. Agent: Kim Witherspoon at Inkwell Management. (July) (c) Copyright PWxyz, LLC. All rights reserved.

*Starred Review* Blue-collar Red Hook, a section of Brooklyn's waterfront in rough transition, becomes one big outdoor theater as temperatures rise in Pochoda's (The Art of Disappearing, 2009) beyond-category urban drama. African American kids from the projects, including pretty Monique, a singer of soaring power, hang out in cliques and gangs, while Monique's smart, ambitious cousin, Cree, keeps to himself in various hideouts, including his late father's grounded fishing boat. An exceptionally talented young street artist lives in a makeshift shelter in a weedy area known as Bones Manor. Smart and observant Fadi strives to upgrade his bodega to attract the neighborhood's new hipsters, among them lost-soul musician and music teacher Jonathan. On one particularly stifling night, Val and June, hot and stir-crazy white teenage girls, dare to take a pink rubber raft out onto the treacherous Hudson River. Val is found unconscious beneath the pier; June is missing. During the ensuing investigation, even the dead have their say. The mysteries of sexuality, guilt, race and class conflicts, artistic pursuits, and psychic abilities are all in play as Pochoda transforms Red Hook into a microcosm of human longing. With prose as cleansing and propelling as a sea breeze and characters running like strong currents, Pochoda pulls us deeply into this transfixing tale of visitations both alarming and liberating.--Seaman, Donna Copyright 2010 Booklist

A mystery about a missing girl and the ghosts she leaves behind. One summer evening, teenagers Val and June float on a rubber raft out into the bay off Brooklyn's Red Hook section. Only Val returns, her near-dead body washed upon the shore. But Val can't seem to tell anyone what happened to them or why June disappeared without a trace. For weeks afterward, the Lebanese shopkeeper Fadi tries to keep his customers informed about developments and neighborhood rumors in the case. Meanwhile, Jonathan, an ex-Julliard student turned jingle writer and music teacher, may be getting too emotionally close to Val. The novel's focus isn't on the police investigation, but on the missing girl's effect on her neighbors and friends. Who saw Val and June take the boat out? Can June possibly be alive? Can young Cree tell what he knows without being automatically accused of a crime since he's a black man? The book is rich with characters and mood and will make readers feel like they've walked the streets of Red Hook. Everyone in the story deserves a measure of sympathy, from the girls on the raft to the shoplifting teenager to the pathetic uncle who won't tell anyone anything for free. Red Hook itself feels like a character--hard-worn, isolated from the rest of New York, left behind and forgotten. A terrific story in the vein of Dennis Lehane's fiction. ]] Copyright Kirkus Reviews, used with permission.
More book reviews at iDreamBooks.com