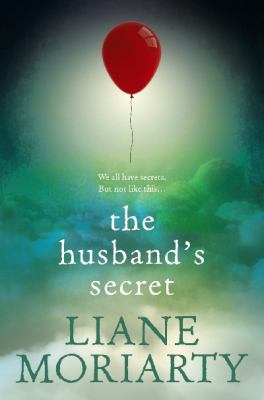 Cecilia Fitzpatrick, devoted mother, successful Tupperware business owner and efficient P&C President, has found a letter from her husband."For my wife, Cecilia FitzpatrickTo be opened only in the event of my death"But Cecilia's husband isn't dead, he's on a business trip. And when she questions him about it on the phone, Cecilia senses something she hasn't experienced before. John-Paul is lying.What happens next changes Cecilia's formerly blissful suburban existence forever, and the consequences will be life-changing for the most unexpected people.

The story of a woman who finds a letter from her husband. It says: For my wife, Cecilia Fitzpatrick. To be opened only in the event of my death. Her husband is very much alive. Should she open it? Would YOU open it?

The story of a woman who finds a letter from her husband. It says: For my wife, Cecilia Fitzpatrick. To be opened only in the event of my death. Her husband is very much alive. Should she open it? Would YOU open it?

Australian author Moriarty, in her fifth novel (after The Hypnotist's Love Story), puts three women in an impossible situation and doesn't cut them any slack. Cecilia Fitzpatrick lives to be perfect: a perfect marriage, three perfect daughters, and a perfectly organized life. Then she finds a letter from her husband, John-Paul, to be opened only in the event of his death. She opens it anyway, and everything she believed is thrown into doubt. Meanwhile, Tess O'Leary's husband, Will, and her cousin and best friend, Felicity, confess they've fallen in love, so Tess takes her young son, Liam, and goes to Sydney to live with her mother. There she meets up with an old boyfriend, Connor Whitby, while enrolling Liam in St. Angela's Primary School, where Cecilia is the star mother. Rachel Crowley, the school secretary, believes that Connor, St. Angela's PE teacher, is the man who, nearly three decades before, got away with murdering her daughter-a daughter for whom she is still grieving. Simultaneously a page-turner and a book one has to put down occasionally to think about and absorb, Moriarty's novel challenges the reader as well as her characters, but in the best possible way. Agent: Faye Bender, Faye Bender Literary Agency. (Aug.) (c) Copyright PWxyz, LLC. All rights reserved.

There are more than enough secrets to go around in the intertwining lives of three women connected to a Catholic elementary school in Sidney. Australian Moriarty (The Hypnotist's Love Story, 2012, etc.) experiments with the intersection of comedy and tragedy in her slyly ambitious consideration of secrecy, temptation, guilt and human beings' general imperfection. Superorganized, always-on-the-go Cecilia is a devoted mother who constantly volunteers at her daughters' school while running a thriving Tupperware business. Not quite as perkily perfect as she seems, 40-year-old Cecilia yearns for some drama in her life. Then, she finds a sealed envelope from her husband that is to be opened only in the event of his death. John-Paul is very much alive, but the temptation to read the contents is understandably strong. Once she does, she can't erase the secrets revealed. Meanwhile, in Melbourne, 30-something Tess' husband breaks the news that he's fallen in love with Tess' first cousin/best friend/business partner. Furious, Tess moves to her mother's house in Sydney. Enrolling her 6-year-old son at St. Angela's, Tess runs into former lover Connor and sparks re-ignite. Formerly an accountant, Connor is now the school's hunky gym coach and is crushed on by students, teachers and parents like Cecilia. One holdout from the general adoration is widowed school secretary Rachel. Connor was the last person to see her 17-year-old daughter Janie before Janie was strangled in 1984. Still grief-stricken and haunted by a belief that she could have prevented Janie's death if she hadn't been 15 minutes late to pick her up, Rachel is increasingly convinced Connor is the murderer. As the women confront the past and make hard decisions about their futures (the novel's men are pale and passive), their fates collide in unexpected ways. Moriarty may be an edgier, more provocative and bolder successor to Maeve Binchy. There is real darkness here, but it is offset by the author's natural wit--she weaves in the Pandora myth and a history of the Berlin Wall--and irrepressible goodwill toward her characters.]] Copyright Kirkus Reviews, used with permission.
More book reviews at iDreamBooks.com