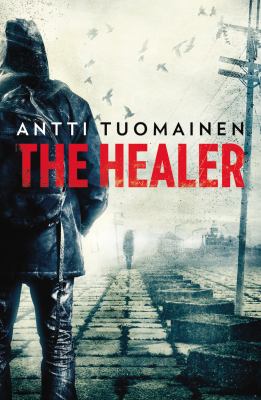 People are fleeing to the far north where conditions are still tolerable. Social order is crumbling. Tapani Lehtinen, a struggling poet, is among the few still willing and able to live in the city. When Tapani's wife Johanna, a journalist, goes missing, he embarks on a frantic hunt for her.

Winner of the Best Finnish Crime Novel of the Year Award. Shortlisted for the Glass Key Best Scandinavian Crime Novel 2012. -Helsinki is battling ruthless climate catastrophe: subway tunnels are flooded; abandoned vehicles are left burning in the streets; the authorities have issued warnings of malaria, tuberculosis, Ebola, and the plague. People are fleeing to the far north of Finland and Norway where conditions are still tolerable. Social order is crumbling and private security firms have undermined the police force. Tapani Lehtinen, a struggling poet, is among the few still able and willing to live in the city. When Tapani's beloved wife Johanna, a newspaper journalist, goes missing he embarks on a frantic hunt for her.

It's two days before Christmas and Helsinki is battling ruthless climate catastrophe: subway tunnels are flooded; abandoned vehicles are burning in the streets. People are fleeing to the far north where conditions are still tolerable. Social order is crumbling and private security firms have undermined the police force. Tapani Lehtinen, a struggling poet, is among the few still willing to live in the city. When Tapani's wife Johanna, a journalist, goes missing, he embarks on a frantic hunt for her. Johanna's disappearance seems to be connected to a story she was researching about a politically motivated serial killer known as 'The Healer'. Determined to find Johanna, Tapani's search leads him to uncover secrets from her past: secrets that connect her to the very murders she was investigating...

Translated from the Finnish.

In a near-future Helsinki, under assault from rising water levels owing to climate change, Johanna, the reporter wife of poet Tapani Lehtinen, disappears. As he searches for her, Tapani finds out that Johanna was investigating a series of murders of corporate executives and their families by a killer known as the Healer. He finds sympathy from the police inspector assigned the case, but with the city's infrastructure crumbling and refugees from the south overwhelming Helsinki, there is little the police can do to help. While Tapani digs into his wife's past and the anticorporate motives of the killer, he uncovers secrets, both personal and political. Verdict Although set in the future, the author's third novel (which won the Clue Award for Best Finnish Crime Novel 2011) is more similar in tone to Ben Winters's Edgar Award-winning The Last Policeman and should appeal to readers who enjoyed that combination of imminent apocalypse and its effects on society with one man's quest to solve a mystery on a smaller, human scale. [Previewed in Kristi Chadwick's Genre Spotlight mystery feature, "Following the Digital Clues," LJ 4/15/13.-Ed.]-Dan Forrest, Western Kentucky Univ. Libs., Bowling Green (c) Copyright 2013. Library Journals LLC, a wholly owned subsidiary of Media Source, Inc. No redistribution permitted.

Winner of the Clue Award for the best Finnish crime novel of 2011, Tuomainen's third book evocatively explores a near-future Helsinki in which private security firms hire murderous thugs to patrol the desolate city. Floods, fires, and disease are also rampant. Amid this turmoil, poet Tapani Lehtinen searches for his wife, Johanna, a journalist who disappeared while covering the story of a serial killer called "the Healer." The Healer targets those he blames for the global warming that led to society's collapse-business executives, politicians, and their families. With a little help from an honest cop and a shadowy cab driver, Tapani digs into his wife's secret past to find her. Tuomainen (My Brother's Keeper) writes beautifully, but at times the text reads like a screed about greed and environmental destruction. But Tapani's progression from a dreamy poet content with staying at home to a man of action elevates this bleak tale and brings a glimmer of hope to rain-soaked Helsinki. (May) (c) Copyright PWxyz, LLC. All rights reserved.

*Starred Review* This dystopian tale snagged the Clue Award for best Finnish crime novel of 2011, and U.S. audiences should prepare to be every bit as enthralled as the Finns. Global climate catastrophe has blanketed Helsinki in perpetual rain; flooding erodes infrastructure; and private security companies are replacing the police force. Tapani Lehtinen and his wife, Johanna, an investigative journalist, have remained in the city instead of fleeing north to escape spreading natural disasters and pandemic disease. So, when Johanna goes missing, Tapani resolves to find her himself and wield some control amid chaos. Johanna had been investigating the Healer, a serial killer targeting those he labels responsible for the climate damage, and is confident she's close to tracking him down. Tapani works backward from the location of her last phone call, linking bits of information he gets from Johanna's jaded editor and the head of Helsinki's almost-defunct homicide division. The trail leads to Johanna's past and reveals buried connections between Johanna and the Healer. Tapani's amatuer sleuthing is all the more fascinating in light of the unimaginable barriers posed by the changing city, with inhabitants focused on their own survival. Readers attracted either to dystopian fiction or to Scandinavian crime will find gold here: Tuomainen's spare, nostalgic style emphasizes the definitive nature of climate catastrophe, where neither revolution nor cure offers respite.--Tran, Christine Copyright 2010 Booklist

In Tuomainen's first appearance in English translation, a long-unpublished poet takes to the streets of a grimly dystopian Helsinki in search of his vanished wife. It's not as if Tapani Lehtinen doesn't already have enough sorrow to weigh him down. A series of weather-related disasters from Bangladesh to the Amazon have created 800 million climate refugees. In relatively sedate Finland, months of rain have interrupted power, ruined homes and canceled any promise of normal social life, as everyone who can move even further north rushes to do so. In the depths of this man-made hell, Johanna Lehtinen goes missing. It's not unusual for newspaper reporters to take off in search of a story without calling in, says Lassi Uutela, her editor, though he can't remember Johanna's ever doing it before. The story Johanna has been working on is chilling: a series of slaughters of prominent business leaders and their families. The person who's claimed responsibility in a series of emails to Johanna, calling himself the Healer, insists that he's only trying to punish the kinds of people who recklessly accelerated climate change. Chief Inspector Harri Jaatinen, of Helsinki's violent crimes unit, has no idea what's happened to Johanna. Neither does her old friend Elina Kallio or her husband, Ahti, a lawyer who's about to leave town with her since they can no longer find work. And the one lead the police have--the discovery of former medical student Pasi Tarkiainen's DNA at several of the crime scenes--is seriously compromised by the news that Tarkiainen died five years ago. Tapani's search, which will lead him through an appalling series of cityscapes to some shattering discoveries about the wife he thought he knew so well, is the stuff of authentic nightmares.]] Copyright Kirkus Reviews, used with permission.
More book reviews at iDreamBooks.com