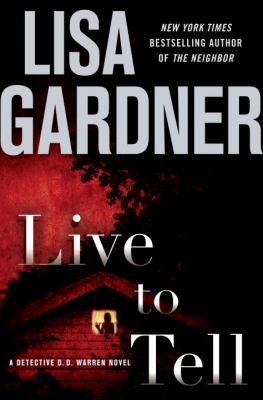 DDC classification: 813/.54 Subject: When a man is accused of killing his family, Detective D.D. Warren is called in. Warren isn’t sure of the man’s guilt and soon an even more unlikely suspect arises.
Tags from this library: No tags from this library for this title. Log in to add tags.
Fiction notes: Click to open in new window
Total holds: 0

He knows everything about you-including the first place you'll hide.<br>  <br> On a warm summer night in one of Boston's working-class neighborhoods, an unthinkable crime has been committed: Four members of a family have been brutally murdered. The father-and possible suspect-now lies clinging to life in the ICU. Murder-suicide? Or something worse? Veteran police detective D. D. Warren is certain of only one thing: There's more to this case than meets the eye.<br> <br> Danielle Burton is a survivor, a dedicated nurse whose passion is to help children at a locked-down pediatric psych ward. But she remains haunted by a family tragedy that shattered her life nearly twenty-five years ago. The dark anniversary is approaching, and when D. D. Warren and her partner show up at the facility, Danielle immediately realizes: It has started again.<br> <br> A devoted mother, Victoria Oliver has a hard time remembering what normalcy is like. But she will do anything to ensure that her troubled son has some semblance of a childhood. She will love him no matter what. Nurture him. Keep him safe. Protect him. Even when the threat comes from within her own house. <br> <br> In New York Times bestselling author Lisa Gardner's most compelling work of suspense to date, the lives of these three women unfold and connect in unexpected ways, as sins from the past emerge-and stunning secrets reveal just how tightly blood ties can bind. Sometimes the most devastating crimes are the ones closest to home.<br>  <br>  <br> <br> <br> From the Hardcover edition.

When a man is accused of killing his family, Detective D.D. Warren is called in. Warren isn’t sure of the man’s guilt and soon an even more unlikely suspect arises.

In her newest thriller (after The Neighbor), Gardner once again successfully borrows from the headlines. Detective D.D. Warren is called to the home of a family of five-four of whom are now dead and the fifth, the dad, lying comatose in the hospital. What initially appears to be a simple, if horrifying, case of murder/suicide quickly turns into something else when a second family is found dead at home. Warren's investigations run parallel to the stories of two other women. Danielle Burton is the lone survivor of the murder of her own family by her father 25 years ago, while Victoria Oliver is living in near isolation as she cares for her severely mentally disturbed eight-year-old son. The connections among the three plot threads become increasingly clearer as both women are drawn into Warren's investigation. Verdict Gardner's writing gets stronger with each new thriller, and the scary possibilities this novel suggests are certainly plausible enough to work. This will strongly appeal to suspense readers, especially for fans of Tami Hoag, Karin Slaughter (see her Broken, reviewed on p. 80), and Tess Gerritsen. [Library marketing; Gardner participated in the Thriller panel at LJ's 2010 Day of Dialog, held May 25 at New York's Javits Center.-Ed.]-Jane Jorgenson, Madison P.L., WI (c) Copyright 2010. Library Journals LLC, a wholly owned subsidiary of Media Source, Inc. No redistribution permitted.

At the heart of Gardner's outstanding fourth novel featuring Boston PD detective Warren (after The Neighbor) are some very sick kids, notably Lucy, a nine-year-old feral girl who self-mutilates when any attention is given to her, and Evan, an eight-year-old boy who during fits threatens to kill his mother. D.D gets involved after two grisly family annihilations lead to the locked-down pediatric psych ward in Cambridge that specializes in Lucy's and Evan's types of hard case. When a child is too sick and the parent can no longer handle care, the child ends up in the acute care facility under the tutelage of pediatric psych nurse Danielle, the lone survivor of her own family bloodbath. Coincidence? That's for D.D. to figure out-in the midst of a budding romance with police academy professor Alex Wilson and infuriating encounters with Andrew Lightfoot, resident "woo-woo expert" (that's cop talk for psychic), who works in tandem with the hospital. Plenty of red herrings keep readers guessing, but Gardner always plays fair in this tight and consistently engaging page-turner. (Aug.) (c) Copyright PWxyz, LLC. All rights reserved

*Starred Review* Boston police detective D. D. Warren returns in another gripping thriller. A family is murdered, apparently by the father (who, it seems, barely failed to take his own life after killing his wife and young children). But soon there are questions, the most pressing of which is, Why would this man, apparently out of the blue, slaughter his own family? Is it possible that someone else was the killer, perhaps another member of the family? In addition to telling a compelling story, Gardner also explores an issue that is rarely discussed in fiction: children who are psychotic. In first-person chapters narrated by other characters (Victoria, a mother at her wits' end; Danielle, survivor of a family slaughter), she eases the reader into unfamiliar territory, telling us about children like Evan, Victoria's eight-year-old son who are capable of astonishing violence, including plotting to murder their own parents. Gardner has never shied away from creepy, psychologically twisted stories, but this may be her most unsettling. The notion of murderous children may be off-putting enough to make some readers avoid the book. That would be a mistake: Gardner never sensationalizes her story, and the book ends with a resolution that is creatively and emotionally appropriate. An excellent novel.--Pitt, David Copyright 2010 Booklist

Sergeant Detective D.D. Warren returns to delve into a series of family murders.Overworked and undersexed D.D. is just about to have a successful first date when her pager chimes with the call of duty. It's not clear whether the mass murder of a family is merely the grisly result of a father gone wrong or something more. While D.D. labors to crack the case with the help of sidekick Alex Wilson, a George Clooneyesque professor training as a criminologist by taking a police rotation, single mother Victoria is just trying to make it through another day. Her life revolves around her emotionally disturbed son Evan, whose constant death threats and physical abuse rule her every move even though he's only eight. The third vein in the story is Danielle's tale of survival. When she was still a child, Danielle's family was killed by her father, but her life was spared. Adult Danielle, who wonders why, spends her time giving back by working late hours as a pediatric nurse with disturbed children. She feels that her unique past can help her connect to the children. The impending anniversary of her family's death, however, weighs heavily on her mind and distracts her. More murders lead to mounting suspense as they knit the stories of the three protagonists more tightly together.An adventurous tale with a bit too much "woo-woo" paranormal but just the right pace and lots of action. Gardner (The Neighbor, 2009, etc.) has another hit on her hands.]] Copyright Kirkus Reviews, used with permission.
More book reviews at iDreamBooks.com