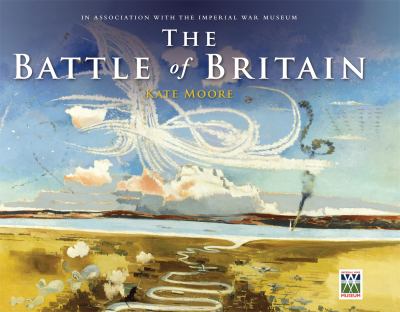 The battle of Britain / Kate Moore.

DDC classification: 940.5342 Summary: Offers an in-depth assessment of the situation leading up to the summer of 1940, the strategies employed by the adversaries and the actual battle itself. Illustrated with photographs, contemporary art and posters, and accompanied by numerour accounts, this title captures the reality and the romance of a defining chapter in British history.
Tags from this library: No tags from this library for this title. Log in to add tags.
No physical items for this record

Published in association with the Imperial War Museum in London to celebrate the 70th anniversary of the Battle of Britain, this book brings one of the most important battles of World War II to life. Lavishly illustrated with photographs, contemporary art and propaganda posters, and accompanied by numerous first-hand accounts, The Battle of Britain captures the reality and the romance of a defining chapter in British history. Moreover, it offers a detailed analysis of the events immediately preceding the battle, the key strategic decisions by opposing commanders that altered the course of the battle, as well as the development of criticial weaponry and defenses that dramatically changed the way aerial combat was fought.

Moore's book pays tribute to visionaries such as R. J. Mitchell and Air Chief Marshall Lord Dowding, who ensured that, rather than simply a victory snatched from the jaws of defeat, this was a battle for which Britain's Fighter Command was uniquely prepared. Such preparation nearly guaranteed that although the British were vastly outnumbered, they could confidently counter the German fighter planes and bombers that darkened the skies throughout the summer of 1940. It was this small band of men and women, covered in detail in this title, that were the first to successfully oppose the seemingly unstoppable tide of the Nazi war machine, irrevocably altering the course of the rest of the war.

"In association with the Imperial War Museum"-- Cover.

Offers an in-depth assessment of the situation leading up to the summer of 1940, the strategies employed by the adversaries and the actual battle itself. Illustrated with photographs, contemporary art and posters, and accompanied by numerour accounts, this title captures the reality and the romance of a defining chapter in British history.

Gr 7 Up-In the summer and autumn of 1940, Britain faced an unparalleled challenge. Forced to beat a quick retreat from Dunkirk with the German Luftwaffe in hot pursuit, the British dug in for what was to be one of the most remarkable feats in the history of human endurance. In this spectacular oversize volume, Moore recounts with notable lucidity and depth the events and characters from both the British and German home fronts during this critical moment in world history and offers an excellent analysis of prewar preparations by both sides. The most outstanding feature of the work is without a doubt the stunning visuals. The book is packed with a fantastic range of archival photos, maps, and war posters with slogans ranging from "England Expects National Service" to "Keep Calm and Carry On," all of which are well captioned. Another excellent feature of the work is the handful of sidebars offering information on high-profile participants, organizations, and movements such as Hermann Goring, the British Women's Auxiliary Air Force, and the Guinea Pig Club. Readers familiar with Susan Campbell Bartoletti's Hitler Youth: Growing Up in Hitler's Shadow (Scholastic, 2005) will find striking parallels in the level of insight and emotional resonance.-Brian Odom, Pelham Public Library, AL (c) Copyright 2010. Library Journals LLC, a wholly owned subsidiary of Media Source, Inc. No redistribution permitted.
More book reviews at iDreamBooks.com