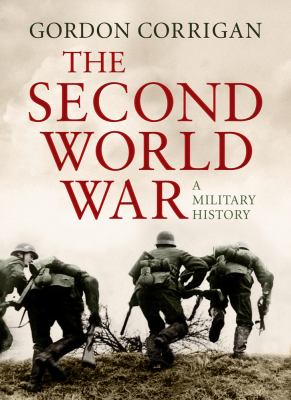 A landmark reassessment of the Second World War, of its origins and prosecution. It looks set to become the definitive single-volume miltary history.

This conventional operational history of the war focuses on high-level leaders and movements of military units. Corrigan (Brigade of Gurkhas, retired; Mud, Blood and Poppycock) utilizes previously published sources to retell the familiar epic story. He gives a lot of attention to the British army (as might be expected from one of its former officers), as well as the Germans, who he thinks were the best fighters. His criticisms of commanders and decisions are deserved but sometimes come across as a little smug, which perhaps comes from the vantage of hindsight. VERDICT Easy to read for all readers but not presenting anything really new, this is best for those unfamiliar with the subject. An optional purchase. [See Prepub Alert, 5/23/11.]-Daniel K. Blewett, Coll. of DuPage Lib., Glen Ellyn, IL (c) Copyright 2011. Library Journals LLC, a wholly owned subsidiary of Media Source, Inc. No redistribution permitted.

Corrigan, a member of the British Commission for Military History, combines scholarship, presentation, and insight for this operational-level military history. This perspective stresses the disconnects between WWII's global nature and the diverse nature of individual campaigns. Strategic planning might have been comprehensive, but the North African desert, the land mass of Russia, the dimensions of the Pacific Ocean, all imposed operational and tactical diversity that in turn engaged resources and focus to the detriment of coordination. Combatant behavior was also affected by circumstances. The Wehrmacht that embraced the Russian front's ferocity fought a relatively clean war in the West. Defining technologies varied from the tank in Russia to the atomic bomb over Japan. Corrigan effectively depicts the synergies among operational theaters, forces committed, and home fronts. He credits the Red army with the "steepest" adjustment to the demands of modern war, while the U.S. stands out as "the most mechanized" and the British as maximizing limited resources. Predictably, the Germans stand out in terms of military effectiveness-nullified by military overextension and political interference. Open to challenge at many points, this is also a useful read. 24 pages of b&w photos, 19 maps. (Nov.) (c) Copyright PWxyz, LLC. All rights reserved.

A retired British army officer, Corrigan has a reputation as a debunker. His Mud, Blood and Poppycock (2003) disputed popular perceptions of Britain's WWI generals as dim-witted bumblers. Shooting barbs at shibboleths about WWII, such as that Bernard Montgomery was a great general (Churchill also receives arrows), Corrigan displays a style of stout assertion throughout this rendition of that conflict. Largely synthesizing extant literature, Corrigan nevertheless reinforces the standard thesis for explaining the war's result, that the Axis, starting wars it expected to be short, could not prevail in a long war against the Allies' superior industrial power. Corrigan's narrative detail supporting the idea generally remains at the level of orders-of-battle, supplemented by statistics about weaponry. Beside recounting campaigns, Corrigan proves keen to rate the military qualities of generals and of entire military establishments. Erich von Manstein and the German army come out on top in this exercise. Albeit opinionated, Corrigan is a breezy writer whose command of WWII knowledge makes him someone those newly interested in the war may profitably read.--Taylor, Gilbert Copyright 2010 Booklist