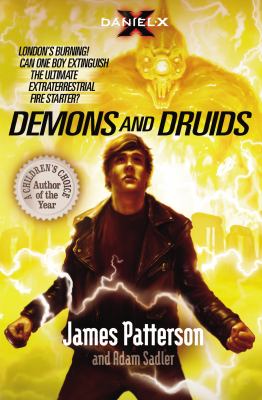 Genre/Form: Science fiction.Summary: As Daniel X continues to hunt for intergalactic aliens, he and his friends go to England searching for Beta, an outlaw who takes the form of fire and who killed Daniel's parents when he was two years old.
Tags from this library: No tags from this library for this title. Log in to add tags.
Fiction notes: Click to open in new window

The Alien Hunter is playing with fire...Daniel X is on an impossible mission- to eliminate every intergalactic criminal on the face of the Earth. Using his incredible superpower to create objects out of thin air, he's taken on some of the most fearsome and fiendish aliens in the universe. Now Daniel has travelled to England in search of his next target- the explosive demon of fire Phosphorius Beta and his army of flame-weaving henchmen.But it's going to take a whole new level of mojo to destroy this villain. Beta's strength has been growing since he arrived on Earth more than a millennium ago, and he's finally ready to turn the blue planet into his own fiery wasteland. The only way to stop him is by jumping back in time to the Dark Ages to end Beta's blistering reign before it has a chance to begin. But can Daniel X take the heat? Or will the Alien Hunter finally get burned?

As Daniel X continues to hunt for intergalactic aliens, he and his friends go to England searching for Beta, an outlaw who takes the form of fire and who killed Daniel's parents when he was two years old.

Gr 5 Up-Daniel X, teen Alien Hunter and Protector of Earth, returns in this third offering (Little, Brown, 2010) in James Patterson's terrific sci-fi series. This time, Daniel is battling Number Three on the list of alien outlaws-Beta Phosphorus-a fire-breathing creature intent on burning up Earth's natural resources. Daniel discovers his ability to travel back in time and returns to 600 A.D. England to battle a much younger Beta and change history. Along the way, he befriends Pendy (aka Arthur Pendragon, aka King Arthur) and Pendy's master, Merlin. Merlin recognizes Daniel for the alien hunter he is and a bond develops between the trio. Daniel is there when Pendy pulls the sword from the stone and becomes King of all England. Merlin lets Daniel know that alien hunters have been there before him and they left him a tool he could use to destroy Beta: Stonehenge. All this fun is enhanced by Milo Ventimiglia's (Gilmore Girls, Heroes) fabulous narration. He moves effortlessly between American and British accents and infuses each character with a unique personality. More of Daniel's back story is revealed, and Ventimiglia allows a vulnerable Daniel to emerge. This is a must-have for science-fiction collections and stands easily on its own. But be prepared for requests for the first two volumes.-Tricia Melgaard, Centennial Middle School, Broken Arrow, OK (c) Copyright 2010. Library Journals LLC, a wholly owned subsidiary of Media Source, Inc. No redistribution permitted.
More book reviews at iDreamBooks.com