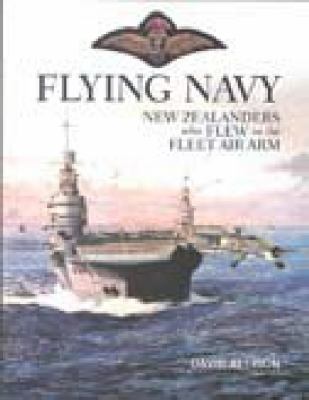 Flying navy : the story of New Zealanders who flew in the Fleet Air Arm in World War I and World War II and the Roll of Honour of those who died in action and on active service / David Allison with Ray Richards.

Flying Navy is the first book published by the Fleet Air Arm Museum of New Zealand. The author, David Allison, is the curator of that museum. Seven hundred and sixty men graduated as trained pilots or observers (navigators), some became TAGs (telegraphist airgunners). Many died in action - hit by flak or enemy fighters, some died on carrier-deck crashes, others were lost at sea, executed by Japanese captors, or flew into mountains at night. In the two world wars 179 young Kiwis died in Fleet Air Arm service. In this book their flying careers are detailed with their photographs printed alongside. The book opens with an account of the original Royal Navy Air Service (RNAS) and its successor the Fleet Air Arm (FAA) of the Royal Navy. Also detailed are prisoner-of-war experiences, escapes from war camps and a New Zealander's early involvement in the air aftermath of the atomic bombs that brought the Japanese war to an end. The book ends with carrier and aircraft data. Throughout the book photographs illustrate this history.