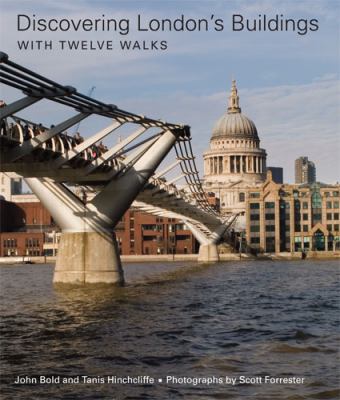 Discovering London's buildings : with twelve walks / by John Bold and Tanis Hinchcliffe ; with photographs by Scott Forrester and maps by Andrew Donald.

DDC classification: 720.9421
Contents:
Introduction: The built heritage -- Picturing London -- The London house -- The London flat -- Servicing London -- Commercial London -- Capital London -- London churches -- Open space -- Conclusion -- The Walks. The city -- Westminster and Whitehall -- Bedford Square to Somerset House -- Legal London -- The South Bank -- Mayfair and Marylebone -- The Barbican to Boundary Street -- Islington -- Kensington and Chelsea -- Hamstead -- East End -- Greenwich.
Summary: A celebration of London's architectural heritage through a selection of themes including houses, churches, railway stations and pubs. Culminates in 12 architectural walks, each carefully planned to explore a diversity of building and architectural heritage.
Tags from this library: No tags from this library for this title. Log in to add tags.

This book presents an original and easily accessible approach to understanding and exploring London's immensely diverse architecture. Because of its size and the number, complexity, and sheer variety of structures in the city, not unplanned, but without an overall plan, it is more difficult to gain an understanding of London's development as a whole than it is with many other world cities such as Rome, Paris or New York. It can no longer be encapsulated in a single view or narrated as a single story, so this book approaches it selectively and thematically, looking at elements of the architecture and services: domestic, commercial, religious and institutional. There are chapters on houses and on apartments as well as on offices and churches, and on government buildings. There are sections for example on schools and on railway stations, on shops and on pubs, on parks and on buildings for sport. Extensively illustrated and richly informed the book treats of both the masterpieces and of the ordinary, and ranges from the middle ages to the immediate present.

It culminates in 12 architectural walks, each carefully planned to explore a diversity of buildings and architectural heritage, and ranging from the central City and Westminster to the inner and outer suburbs.