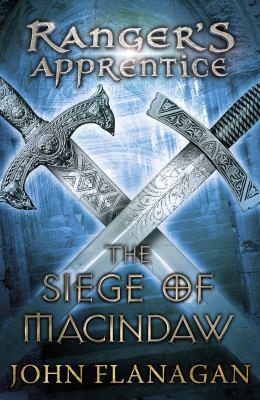 The siege of Macindaw / John Flanagan.

The Siege of Macindaw is the sixth thrilling book in John Flanagan's Ranger's Apprentice series - over eight million sold worldwide.

A renegade knight has captured Castle Macindaw, poisoning the royal family and conspiring to overthrow the Kingdom.

The fate of Araluen rests in the hands of two young adventurers: the Ranger Will and his warrior friend, Horace. Yet for Will, the stakes are even higher. For inside the castle, someone he loves is being held hostage. Now is the time to become the hero he was trained to be . . .

In this desolate northern fief, where can Will find the fighting men he needs to overcome the traitorous Sir Keren and his band of criminals? Across the border, the fierce Scottie tribesmen are waiting for the signal that Castle Macindaw is in friendly hands, and the way is clear to mount a full-scale attack.

In Book 6 of the popular Ranger's Apprentice series, Will, his friend Horace, and a sorcerer/healer join forces with a fierce but loyal troop of Skandians to recapture Castle Macindaw, rescue Alyss from its tower, and restore the castle to its rightful owner. Series fans will relish the familiar details of warfare and comradeship as well as the surprising fireworks in both war and love. While this satisfying novel could be enjoyed as a separate volume, it is best read in series order, as it concludes the story of Will's first mission as a Ranger, an adventure begun in Book 5.--Phelan, Carolyn Copyright 2009 Booklist
More book reviews at iDreamBooks.com