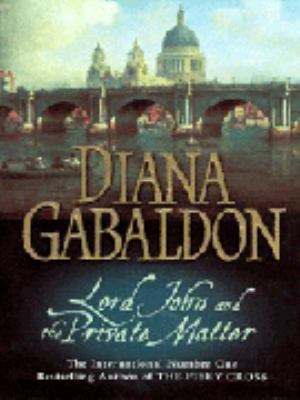 | Great Britain -- History -- 18th century -- FictionGenre/Form: Historical fiction. | Detective and mystery fiction.DDC classification: Free Fiction Summary: The year is 1757. On a bright June day, Lord John Grey emerges from his club, his mind in turmoil. A nobleman and high-ranking officer in His Majesty's Army, Grey has just witnessed something shocking. But his efforts to avoid a scandal that might destroy his family are interrupted by something still more urgent: the Crown appoints him to investigate the brutal murder of a comrade-in-arms, who might well have been a traitor.
Tags from this library: No tags from this library for this title. Log in to add tags.
Fiction notes: Click to open in new window

Sweeping historical epic set in England, Scotland and France in the mid-18th Century Lord John Grey is a man at the centre of the political upheavals that rocked Britain in the mid-18th Century. The Jacobites are still a threat, and the old enemy, France, is ready and willing to exploit the situation to its own advantage. London, Edinburgh and Paris are hotbeds of espionage, intrigue and murder. Lord John, having been removed from London for some time, appears to be above the plotting and does not appear to have any allegiance to one clique or another. So when murder happens, and seems to be the result of French espionage, he is the one who seems best placed to be able to unravel the knots... But who is John Grey, where do his allegiances lie, and who, in the long run, will he follow and serve?

Followed by: Lord John and the brotherhood of the blade.

The year is 1757. On a bright June day, Lord John Grey emerges from his club, his mind in turmoil. A nobleman and high-ranking officer in His Majesty's Army, Grey has just witnessed something shocking. But his efforts to avoid a scandal that might destroy his family are interrupted by something still more urgent: the Crown appoints him to investigate the brutal murder of a comrade-in-arms, who might well have been a traitor.

In a new trilogy based on a character from Gabaldon's beloved "Outlander" series, Lord John Grey pursues a traitor through the back alleys of 1750s London. (c) Copyright 2010. Library Journals LLC, a wholly owned subsidiary of Media Source, Inc. No redistribution permitted.

Trouble befalls Lord John Grey (fresh from minor roles in Gabaldon's bestselling Outlander novels) when he accidentally discovers that the Hon. Joseph Trevelyan, his cousin's betrothed, may have what those in 1757 termed "the pox" or "the French disease" syphilis. Before he can figure out an appropriate way to handle this delicate matter, he becomes involved in the investigation of the mysterious and grisly murder of a military colleague suspected of being a spy. Gabaldon (The Fiery Cross; Drums of Autumn; etc.) stitches these two plots together into a compelling narrative that also offers a wealth of juicy details about 18th-century London, especially its homosexual underbelly. Lord John, who reminisces about his dead lover, Hector, and the "lean, hard body" of an old flame, learns that Trevelyan may be traveling from one house of ill repute to another of a different sort: at the Lavender House, both buyers and sellers are men. Among his various trials and tribulations, Lord John must discern the identity of a mysterious figure in a green velvet dress spotted in both of these establishments and investigate the mysterious death of a similarly attired man, found with his face bashed in. Grey is a competent and likable sleuth, and Gabaldon's prose is crisply elegant. Her many fans will be happy to learn that this is the first in a series about the travails of Lord John Grey. (Oct.) (c) Copyright PWxyz, LLC. All rights reserved

After accidentally observing a spot on Joseph Trevelyan's privy member, Major Lord John Grey finds himself in a devilishly difficult position because Trevelyan is about to marry Grey's cousin, who has no idea her fiance is infected with the pox. As he searches for a discreet way to confirm his suspicions, Grey is dragged into a different kind of investigation. British Army requisition papers have vanished in Calais, and Grey must find out if there is some connection between their disappearance and the recent murder of a possible spy Sergeant Timothy O'Connell. Grey, who has a secret of his own to protect, begins an investigation into O'Connell's death, which, interestingly enough, leads to Trevelyan and a mysterious woman in green velvet whose identity may provide answers to all of Grey's questions. New York Times best-seller Gabaldon promotes Grey, a popular secondary character in her Outlander series, to a starring role in this thoroughly entertaining and wonderfully witty historical mystery set in the richly detailed, occasionally bawdy world of Georgian England. --John Charles Copyright 2003 Booklist

Lord John Grey, a minor character in Gabaldon's wildly popular Outlander series, investigates a murder--and is forced back into a world he'd hoped to forget. A casual glance at the Honorable Joseph Trevelyan's privy member when both men relieve themselves reveals something that Grey would rather not see: a small chancre. Given that there is no cure for syphilis in 1757, and since Trevelyan is engaged to his cousin Olivia, Grey considers himself obliged to confirm--in secret--whether her fiancÉ is poxy. Like any other valuable commodity in the mercantile city of London, information has a price, and its purveyors come from all walks of life. Grey's comrade-in-arms, Harry Quarry, a practical sort, tells him to make inquiries among the whores at Trevelyan's favorite brothel before they commence their official assignment: investigating the mysterious death of a fellow soldier, who may have been a spy. A very young prostitute, whose rough Scots accent evokes Grey's lingering (if unrequited) affection for Jamie Fraser, tells him that Trevelyan has been seen dressed as a woman, secretly entering the Lavender Club, where, after the death of his lover Hector, Grey once found some comfort in the arms of other men, though he was half-crazy with grief and drink. The plot thickens when a streetwalker is found viciously murdered, her face beaten to pulp. But she turns out to be a he--and Gabaldon takes readers for a walk on the wild side, offering an intriguing look into London's gay underworld, from dark side streets to elegant clubs--and, briefly, to tender scenes of love, emotional and physical, between men. But her chief focus is on the deepening mystery surrounding Trevelyan, his mistress, his shadowy dealings, his sexual identity, and those who serve his complex desires. A compelling and unique period mystery for the author's legion of fans. Copyright ©Kirkus Reviews, used with permission.
More book reviews at iDreamBooks.com