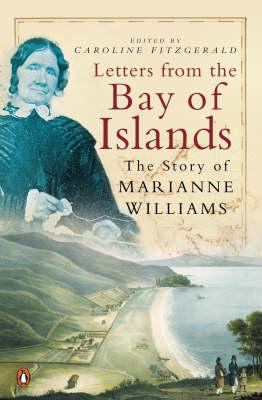 Letters from the Bay of Islands : the story of Marianne Williams / Caroline Fitzgerald.

An extraordinary first hand account of the first missionaries to New Zealand from the wife of Henry Williams. This collection of letters has been edited and collated by Caroline Fitzgerald, the great-granddaughter of Marianne Williams. They provide a window into both a key chapter in the history of European interaction with Maori and into the unique and courageous character of this pioneer woman. In 1822, Marianne Williams, with her missionary husband Henry (translator of the Treaty of Waitangi into Maori) and their three small children, left England for the Bay of Islands. Their new home was a remote one-house settlement in Paihia situated among warring Maori tribes with unruly European whaling crews across the bay. With her husband often absent, she was nurse, midwife and surrogate missionary in the community and coped with running the mission station and schools and attending to her growing family. These letters were Marianne's only contact with the outside world and with her family back in England, the mail service was so irregular that it often took 18 months to get a reply.They show her courage and uncomplaining determination, describing in vivid and compelling detail the hardships and joys of daily life, the family's relationship with Maori and the excitement of receiving rare visitors, including Charles Darwin.