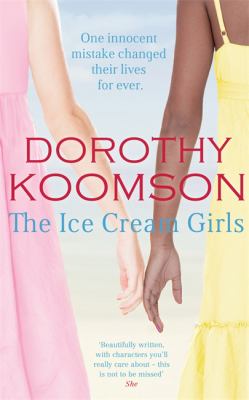 DDC classification: 823.92 Summary: At only 18 years of age, Poppy and Serena were the only witnesses to a tragic event. Amid heated public debate and scrutiny, the two glamorous teens were dubbed 'The Ice Cream Girls' by the press and forced to go their separate ways and to lead very different lives.
Tags from this library: No tags from this library for this title. Log in to add tags.
Total holds: 0

At only 18 years of age, Poppy and Serena were the only witnesses to a tragic event. Amid heated public debate and scrutiny, the two glamorous teens were dubbed 'The Ice Cream Girls' by the press and forced to go their separate ways and to lead very different lives.

Teenagers Serena and Poppy were tried in 1989 for the murder of Marcus Halnsley, Serena's former history teacher and their mutual "boyfriend." Poppy was found guilty but is now being released after serving 20 years in prison. Serena was acquitted and lives in Brighton with her doctor husband, Evan, and her two children. Serena never told Evan about her past, about the lover who controlled her through psychological and physical pain and how he died. Poppy contends that she herself is innocent and wants Serena to confess to the crime. The tension builds as the women spin closer to a final reckoning. Verdict Koomson (Marshmallows for Breakfast; Goodnight, Beautiful) sets readers on edge as she describes the girls' brutal relationship with Marcus (whom Serena still refers to as him). We feel for these once lonely teens whose youth was stolen by a predator and who continue to suffer guilt and regret. Which one stabbed Marcus to death? Koomson could have chosen one of several scenarios to conclude her novel. Did she take the easy way out? Agree or not, readers won't be able to put down this absorbing book. [Reading group guide.]-Bette-Lee Fox, Library Journal (c) Copyright 2012. Library Journals LLC, a wholly owned subsidiary of Media Source, Inc. No redistribution permitted.

Two women, tried as teens for the murder of their teacher, confront their past and each other. A tabloid photo of 18-year-old Serena and 16-year-old Poppy, pictured wearing string bikinis and holding ice-cream cones, leads the London press to dub them the Ice Cream Girls. After their former teacher, Marcus, was found stabbed through the heart, each girl denied administering the coup de grce. The sensationalist press coverage portrayed the teens as sociopaths and Marcus as a saint. The jury believed Serena but convicted Poppy. Twenty years later, Poppy is paroled from prison, and returns to her parents' home in Brighton, where the welcome is decidedly frosty. Serena, also a resident of Brighton, has a professional career, is married to mild-mannered physician Evan and has two children. Through flashbacks, we learn that--unbeknownst to their parents--Marcus seduced both girls when they were underage, then embroiled them in a depraved mnage trois. Each suffered beatings, emotional abuse and repeated rapes. Serena's outwardly calm domestic life imperfectly masks her post-traumatic stress--she hides the kitchen knives every night and cannot bring herself to reveal her past to Evan. Poppy emerges from prison with only one goal in mind: force Serena to admit that she was the one who fatally stabbed Marcus, not Poppy. Threatening to expose her to Evan, Poppy tries to coerce a confession, however Serena claims that she cannot recall how Marcus was killed or by whom. It stretches credulity that two girls from relatively privileged homes could not escape this predator especially since, when they're not enduring his atrocities, they are living at home with their parents. The accretion of details of these horrors certainly imparts a credible motive for murder. However, the question remains, who actually killed Marcus? The solution to this puzzle is unexpected, largely because Koomson elects to gloss over the details of the murder investigation and trial. Although the plot does not weather close scrutiny, this is an unsettling, insomnia-inducing read.]] Copyright Kirkus Reviews, used with permission.
More book reviews at iDreamBooks.com