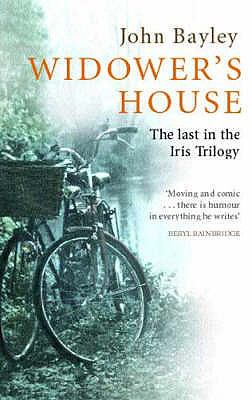 With this volume, John Bayley completes his trilogy, looking back on the years in sickness and health which he and Iris spent together, and attempting to come to terms with her absence. As time goes by he finds himself beset with new and alarmingly unfamiliar problems: he suffers equally from the helplessness of being alone and the kindly harassment of well-wishers; discovering too that a widower's life can contain many moments of bizarre comedy.

Bayley, an accomplished literary critic and Oxford don, was married to the novelist Iris Murdoch for 44 years. Following Elegy for Iris (LJ 12/98) and Iris and Her Friends (LJ 10/15/99), this memoir is Bayley's third attempt to exorcise his grief over her death. As the subtitle intimates, it is really too different stories: a long meditation on the nature of bereavement and an irreverent tale of Bayley's efforts to escape the attentions of two designing women. Bayley's style is conversational yet elegant; his polished prose is sprinkled with literary and historical allusions, ranging from Viking history to the Booker Prize. Murdoch fans should be warned, however, that while the author recalls intimate details of his life with Iris, the book's focus rests squarely on Bayley's struggle with widowerhood. A pleasant, interesting read, this book is recommended for larger literature collections. [Previewed in Prepub Alert, LJ 2/15/01.] William Gargan, Brooklyn Coll. Lib., CUNY (c) Copyright 2010. Library Journals LLC, a wholly owned subsidiary of Media Source, Inc. No redistribution permitted.

Following the February 1999 death of his wife of 44 years, novelist Iris Murdoch (whose lapse into Alzheimer's he chronicled in his bestselling Elegy for Iris), Bayley just wanted to live undisturbed, as "a widower in my own house." Yet he can't seem to get any peace and quiet with all the widows coming around an old friend of Iris's, a former student and hundreds of Murdoch fans who admire his sensitive account of his wife's decline and consider him the widower of their dreams. Bayley goes along, playing a passive but willing victim of their "well-meaning persecution," which involves household chores and chat as well as intimate companionship. (Perhaps the gentleman doth protest too much?) All the while, he's musing on the lack of a job description for widowerhood "being bereaved was not a career" while coming to terms with its unpredictability. Behind this curtain, another more subtle drama is unfolding: Bayley is letting go of his life with Murdoch. At first, his writing is filled with anecdotes about life with Iris, but by the end of the book, he's realizing he can't even picture the pre-Alzheimer's Iris anymore and that, in fact, he'd never really wanted to marry her. As Iris recedes, Bayley takes hold of his life again and remarries. Bayley's style is arch and self-critical, rather like that of one of Barbara Pym's skittish Oxford dons (no coincidence: Bayley, a literary critic, is a retired Oxford professor and Pym fan). Although precious at times, this memoir is engaging. (June) Forecast: Though too dark to become a mainstream pick-me-up for widowers, this may well become a letlles lettres classic. (c) Copyright PWxyz, LLC. All rights reserved

This is the third installment in Bayley's witty and confiding chronicle of the loss of his beloved wife, the brilliant Iris Murdoch, a sea change he's written about with candor and sensitivity in Elegy for Iris (1998) and Iris and Her Friends (1999). Here, utterly at ease on the page, Bayley presents himself as a rumpled, misanthropic, and easily panicked fellow hiding out in his astonishingly cluttered and dusty house, contemplating the nature of bereavement and the difficulties of establishing a satisfactory widower's life. Unsure if he craves or loathes solitude, Bayley dithers while Margot and Mella, two strong-willed women, boldly invade his territory with intentions honorable and otherwise. Unsettled by Margot's frankness and Mella's secretiveness, he loses his taste for his favorite things--a good book, a stiff drink--and feels besieged not only from without (he's even burglarized) but from within by unruly memories and confused desires. Comic, chatty, and shrewd, Bayley's generously self-deprecating report on his brief term as widower reveals much about the perversity of human nature. Donna Seaman

The memoirs of an acidic curmudgeon and widower. After his beloved wife Iris Murdoch died, Bayley (Iris and Her Friends, 1999, etc.) was besieged by well-wishers offering assistance and companionship. Margot and Mella, the two most irrepressible of the gaggle of helpmeets, zipped into his life with a feminine force that rendered the man helpless to avoid their tireless ministrations. One slipping innocently into his bed, the other staging a full-frontal seduction, Margot and Mella riotously overturned the authors nascent widowers lifestyle of reclusive seclusion with their zealous determination to help one who does not want to be helped. The ingredients for a delightful farce or comedy of manners lie in bountiful supply within this material, but Bayley fails to take advantage of these possibilities with his snide commentary. Perhaps too honest in his reactions, he assails the reader with his ambivalent distaste for this humorously affable pair. Its an authorial blunder that casts him as the unlikely villain of his own life story even when he does admit his own culpability in the soap opera around him. Couple this cranky tone with a literature professors overenthusiastic affection for literary allusion, and the result distills itself from a heartwarming and breezy consideration of life as a widower into a bitter diatribe against two generous (though perhaps needy) souls. Mercifully, Bayleys humanity outshines his cantankerousness on occasion, as when he ponders over his life without Iris and finds new affections with his old friend Audi. His love for Iris is plangent and deep, filled with memory and their shared history; his love for Audi is fresh and budding, filled with possibilities and regeneration. Still, since you never know when this crocodile will snap, youd better stand clear altogether. Could have been funnier, should have been kinder.
More book reviews at iDreamBooks.com