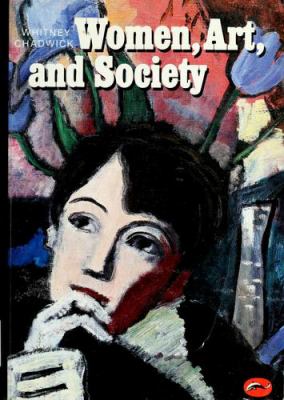 For approximately two decades, feminists have been attempting to create and maintain a place for women artists in mainstream art historical literature; Whitney Chadwick succeeds in this endeavor through a modified approach. She integrates women's roles in society with art history because, philosophically, there is no progressive history of women artists. As Chadwick unequivocably states, "the historical and critical evaluation of women's art has proved to be inseparable from ideologies which define her sic place in Western culture generally." The volume uses as an outline the standard art historical time periods as chapters; these are documented through the works of women painters, sculptors, architects, decorative artists, and performance artists, and with works depicting significant individual females. Since it seeks to summarize the existing literature presented from a cultural standpoint, this book emerges as an ideal source for students and scholars alike. Numerous illustrations and an extensive bibliography supplement the text. L. Doumato National Gallery of Art

This compacted history surveys women artists since the Middle Ages in light of feminist issues--in particular, those raised in the decade since Germaine Greer traced their fortunes in The Obstacle Race (1979). Chadwick (Art/San Francisco State Univ.) argues that a study of this sort is complicated by a patriarchal cultural tradition that has cast women as ""the objects of art, rather than its producers""--and she opens with a graphic illustration. In an 18th-century painting of the British Royal Academy, Johann Zoffany portrays the only two women in the group--Angelica Kauffmann and Mary Moser--not ""among the artists"" but as ""painted busts."" Fueled by poststructural criticism, Chadwick looks beyond simply the practical barriers facing women artists, and scrutinizes the ""ideologies which have shaped production and representation for women."" The dry text breaks the millennium into traditional fields, like Renaissance, Northern Genre, and Modern, and covers countless art historical ""exceptions,"" particularly the best-known--like Artemisia Gentileschi, Berthe Morisot, Mary Cassatt, Frida Kahlo, and Sonia Delaunay. Chadwick whets the reader's interest by reporting on recent scholarship and bringing up topics of current concern like the ""commodification"" of the modern female image. But the ambition to embrace so many artists and theories leaves the treatment of most subjects too condensed--and the overall discussion too splintered--to cut the surface. As a record of women's schizophrenic position as sometime artist and frequent model, Chadwick's volume (with 243 wonderful illustrations, 50 in color) may best serve students looking for yet-to-be-mined veins of research. Copyright ©Kirkus Reviews, used with permission.
More book reviews at iDreamBooks.com