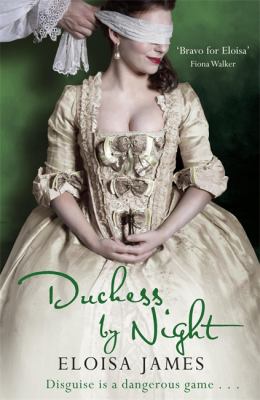 Disguise is a dangerous game . . .

After a lifetime as a wallflower Harriet, the Duchess of Berrow, is finally seeking a little pleasure of her own. And where better to begin than at the house of one of the most disreputable men in the country, Lord Strange?

The high-stakes games of lust and chance that rule Strange's household, however, mean that even being seen crossing his threshold could ruin her reputation forever. So Harriet swaps her hoops and corsets for a pair of breeches and transforms herself into a young male relative of the Duke of Villiers.

Before she knows it, Harriet is writing bawdy missives on behalf of a young actress, not to mention winning card games played by the most powerful men in England.

But when she starts attracting male attention, Harriet must decide whether to stay in her disguise - or to reveal that she's really a duchess by night . . .

Widowed and bored, dispensing her version of justice in the Shire Court and thinking she's missed out on life's adventurous side, Harriet, Duchess of Berrow, decides some changes are in order and sallies forth disguised as young Harry Cope to a rather disreputable house party. The problems arise when her host, the scandalous rake Lord Strange, is attracted to "Harry." With a nod to Shakespeare's Twelfth Night and other classics, this insightful, bawdy Georgian escapade is filled with memorable characters (including a meddlesome yet precocious eight-year-old) doing outrageous things and is the third title in the author's "Desperate Duchesses" series. James (An Affair Before Christmas), a Shakespearean scholar in her other life, lives in the New York City area. (c) Copyright 2010. Library Journals LLC, a wholly owned subsidiary of Media Source, Inc. No redistribution permitted.

Harriet, the young widowed duchess of Berrow, longs to escape the elaborate wigs and skirts of Georgian society and have a true adventure. Opportunity arises when friend Isidore wants to lure her long-absent husband back from his Far East explorations with a grand scandal. Accompanied by the trusty duke of Villiers, the two women visit the home of the scandalous Lord Strange whose home is (gasp!) regularly filled with actors and actresses. Though it's Isidore's plan, it's Harriet who flirts with real danger: dressed in breeches, she poses as Harry, a mama-protected young relative of the duke's. With her characteristic wit, James details Harry's bravado as "he" rides without a sidesaddle for the first time, learns to fence with the formidable Lord Strange and fends off the amorous advances of an actress. Harriet revels in the freedom offered by her male identity, but her heart remains traitorously female, especially in the presence of Lord Strange, who finds himself uncomfortably attracted to the beautiful young lad. James delights with seduction, surprise and humor on every page. (July) (c) Copyright PWxyz, LLC. All rights reserved

It had been more than two years since her husband, Benjamin, committed suicide, and Harriet, the Duchess of Berrow, is ready for a change. Tired of her respectably dull and lonely existence, Harriet decides what she needs is some pleasure and excitement. So she agrees to accompany her friend Isidore, the Duchess of Cosway, and the Duke of Villiers to one of Lord Justinian Strange's notoriously scandalous house parties disguised as Villiers' nephew, Harry Cope. Harriet's newfound freedom as Harry is intoxicating, but there is a problem: Harriet finds herself falling for Strange, who is busy trying to teach Harry how to be a man. The latest addition to best-selling James' Duchess Georgian historical series is a lusciously sexy and wickedly witty tale of disguise, deception, and desire that will dazzle readers.--Charles, John Copyright 2008 Booklist
More book reviews at iDreamBooks.com