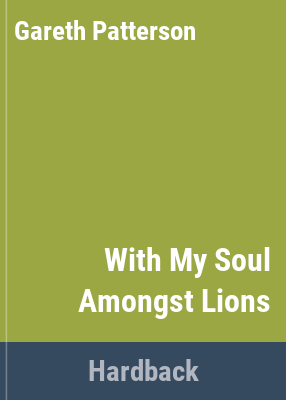 With my soul amongst lions : a moving story of the struggle to protect the last Adamson lions

When George Adamson was murdered, Gareth Patterson vowed to continue his work. He successfully restored George's lion cubs, who were once again orphaned, into the wild. But soon Batian, the pride male, became the victim of a cruel murder.

Sequel to: Last of the free.

In this gripping sequel to Last of the Free (LJ 4/15/95), Patterson continues his heroic struggle to provide a safe haven for the last descendants of the famous "Elsa" (a lioness rehabilitated to the wild by Joy Adamson, as recounted in her classic Born Free). Political and social conditions in Botswana and South Africa continued to work against Patterson, and he and his companion, Julie, survived tremendous hardships to promote their environmental efforts. Patterson describes the appalling cruelty inflicted upon the wildlife of the Tali Bushlands at the hands of poachers, politicians, and landowners. A tale of murder in the bushlands unfolds as he recalls how he often risked his life in the fight to protect the two remaining Adamson lionesses. Patterson is more than a man who lives with lionshe is a dedicated conservationist who has made great personal sacrifices to create a safe place for all wildlife. His tale is a harrowing one. Will the last of the Adamson lions survive? Will political and social entanglements be straightened out enough for the eventual formation of the South African Peace Park? Certainly the story is unfinished. Recommended for popular collections.Edell Marie Schaefer, Brookfield P. L., Wis. (c) Copyright 2010. Library Journals LLC, a wholly owned subsidiary of Media Source, Inc. No redistribution permitted.

After George Adamson, whose wife, Joy, wrote the Born Free trilogy, was murdered by poachers in 1986, Patterson took over his work with lions. He relocated the remaining three to the Tuli bushlands in Botswana, an area that borders on Zimbabwe and South Africa. The lionsBatian, Furaka and Rafitibecame integrated with the local wild lions, mating with them and becoming completely independent. Batian, the male, wandered into South Africa, where he was shot by trophy hunters. In this emotionally charged sequel to Last of the Free, Patterson chronicles the fate of the two surviving lions. He has shared an extraordinary, intimate relationship with them, living with the pride for several years. He and his companion, Julie, lived and worked under appalling conditions of extreme heat and aridity, patrolling for poachers and struggling with landowners. This is an intense, gripping story of Patterson's attempt to save African wildlife. He is working at present toward a Peace Park, a reserve that would include land from all three countries, giving the wild animals both protection and space to live without the constriction of national boundaries. Photos. (Nov.) (c) Copyright PWxyz, LLC. All rights reserved

Patterson feels proud and protective of his lions, the three Born Free orphans he was given by George Adamson. The beloved cubs, Batian and his sisters Furaha and Rafiki, were moved south and reintroduced into the wilds of Botswana's Tuli bushlands. As the sequel to Last of the Free (1995), much in this book is written with a heavy heart. It starts with the death of Batian by conniving poachers and includes the execution of Furaha along with two of her cubs for allegedly killing a man. In his role as a conservationist, Patterson had encouraged the installation of low-lying electrified fences to keep lions away from the easy prey of grazing cattle. Ten years later, predator-deterrent fencing still is not commonly used, and many prides of lions have disappeared as a result of farmers protecting their herds, rampant poaching, and tourism. Rifiki is the last Adamson lioness; happily, she and her two cubs were last seen roaming safely in Zimbabwe's Tuli Safari area. --Jennifer Henderson

In this raw-edged sequel to his Last of the Free (1995), Patterson updates readers on the fate of his lion cohorts in the southern African bushlands. When last heard from, Patterson was deep in the Botswanan wilds at his camp on the Tuli Lion Trust, there to return to nature three lions (of the Born Free troupe) he had brought down from Kenya. As readers again cross his path, Patterson recounts how one of his charges has recently fallen to illegal ``sports,'' lured off protected ground and shot under the least sporting of conditions. Patterson's sadness and frustration are exacerbated by the owners of the trustlands, who feel that his writings on the lions' plight may subject their holdings to nationalization by the Botswanan government. On the owners' heels come the poachers and the farmers who kill lions for culling their herds. From an unexpected quarter, his work is broadsided by a clutch of scientists who, chanting the purity-of-race mantra, disapprove of the interbreeding of Kenyan and Botswanan prides. Marshalling on, Patterson charts the progress of the lions, lays bare his private life, gives readers an earful of his encounters with spitting cobras and neurotoxic scorpions sharing his special patch of earth, laces the narrative with suggestions on how to cushion the meeting of human and beast: deterrent fencing, the environmental education of local youth, beefed-up patrols. The book closes with one of the remaining lions accused of killing a man. She is shot, along with her cubs. Patterson is appalled and builds a strong case that illegal ivory traders were the culprits. Patterson may overplay his grizzled gruffness and suffer on occasion from spiritual bloat, but he's the real potato when it comes to the Tuli lions. Spurning his advice would only be folly. (16 pages photos, not seen)
More book reviews at iDreamBooks.com