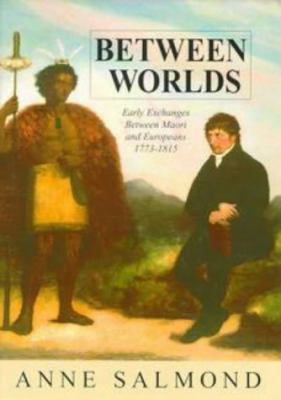 Between worlds : early exchanges between Maori and Europeans, 1773-1815 / Anne Salmond.

Anne Salmond's trail - blazing and award - winning book Two Worlds rewrote our understanding of what happened between Maori and European from Able Tasman's visit in 1642 to Cook's in 1772. This book picks up where Two Worlds ended, with the arrival of Cook's second expedition in 1773, and takes the story through to 1815, with the establishment of the first British missionary settlement in the Bay of Islands. Between the Worlds describes Cook's second and third voyages. It tells of a time when white people first lived on the shores of New Zealand, often joining Maori communities - the first so - called Pakeha - Maori. The story also covers the early visits of the missionaries Marsden and Kendall. At the same time, young Maori men went to sea in European ships and explored the world. Like Two Worlds before it, Between Worlds redefines our understanding of the earliest days of Maori and European interaction and forces us to rethink New Zealand's shared history.

Salmond's splendidly produced book will grace any coffee table and grip many general readers with the dramatic force of its narrative, but it also belongs in any self-respecting university library for the depth and power of its historical research and analysis. A successor to Salmond's Two Worlds: First Meetings between Maori and Europeans, 1642-1772 (CH, Dec'92), it takes the story of the interaction between the Maori and the Europeans in New Zealand from the time of Cook's second expedition of 1773 to 1815 and the first British missionary settlements, a period in which for the first time the Maori were able to study whites actually living among or near them. The book analyzes the impact of each culture on the other, alternating between contemporary Maori analyses of the whites and white assessments of the Maori. The author examines in detail the impact of European scientific methods and ideas, exemplified in Cook's voyages, which were backed by the Royal Society, as well as the effects of commerce in flax, timber, sealing and whaling, and the cultural onslaught of Christian missionaries. At the same time, young Maori men were exploring the world as seafarers in English ships, and their ideas contributed to Maori strategies for dealing with the strangers. All levels. J. E. Flint emeritus, Dalhousie University
More book reviews at iDreamBooks.com