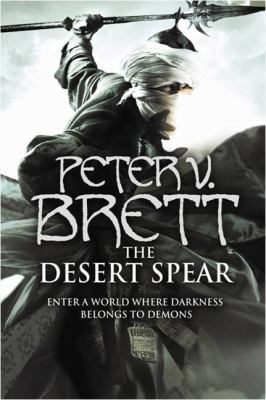 The sun is setting on humanity. The night now belongs to voracious demons that prey upon a dwindling population forced to cower behind half-forgotten symbols of power. Legends tell of a Deliverer: a general who once bound all mankind into a single force that defeated the demons. But is the return of the Deliverer just another myth? Perhaps not. Out of the desert rides Ahmann Jardir, who has forged the desert tribes into a demon-killing army. He has proclaimed himself Shar'Dama Ka, the Deliverer, and he carries ancient weapons--a spear and a crown--that give credence to his claim. But the Northerners claim their own Deliverer: the Warded Man, a dark, forbidding figure. Once, the Shar'Dama Ka and the Warded Man were friends. Now they are fierce adversaries. Yet as old allegiances are tested and fresh alliances forged, all are unaware of the appearance of a new breed of demon, more intelligent--and deadly--than any that have come before.
Now with twenty pages of bonus material, including an exclusive interview with Peter V. Brett

From the people of the desert, a warrior has arisen to deliver them from the demons that rule the night and bring terror and destruction to the land. Ahmann Jardir bears the ancient spear and crown that seem to mark him as the Deliverer, but a rival-once a friend-known as the Warded Man challenges his claim. Now a new kind of demon has arisen, and the world's fate depends on a small group of brave souls who must rely on their combined strength to save their people. VERDICT The sequel to Brett's acclaimed debut, The Warded Man, extends the author's panoramic vision of a world steeped in the traditions of the desert and rich in magic both good and evil. Fans of epic fantasy in the tradition of Robert Jordan and George R.R. Martin will enjoy the arrival of a strong voice in multivolume epic fantasy. [Also available as an ebook: ISBN 978-0-345-51963-4; The Warded Man has been optioned by director Paul W.S. Anderson (Resident Evil).-Ed.] (c) Copyright 2010. Library Journals LLC, a wholly owned subsidiary of Media Source, Inc. No redistribution permitted.

In keeping with the recent trend of starting in the thick of the action, this sequel to 2009's The Warded Man picks up in the heat of Jardir's conquest of the greenlands. This choice may pull in new readers but risks alienating returning ones, since series hero Arlen Bales doesn't even appear until midbook. Jardir, who seemed to mostly be a villain in the first book, is made more sympathetic through a flashback to his childhood warrior training and the machinations of his psychically gifted chief wife, Inevera, who seems part Bene Gesserit and part Lady Macbeth as she plots his rise to power. Romantic entanglements occupy much of the book and lead to an abrupt conclusion that would benefit from a gentler epilogue, but is sure to leave fans on tenterhooks waiting for the last installment. (Apr.) (c) Copyright PWxyz, LLC. All rights reserved

The gripping sequel to The Warded Man (2009) opens with Jardir, whom we last saw betraying his Northern blood brother Arlen over the Deliverer's legendary spear, in the South. Calling himself the Deliverer, he invades the North in the name of creating unity for the Great War against the demons. This Daylight War has not yet found Leesha and Rojer, who are training demon fighters across the North, or Arlen, who denies being the Deliverer himself because he's consumed by fears of becoming a demon. The rise of a new demon species complicates the charged atmosphere between the two cultures that, though anathema to each other, struggle to unite without destroying either. It's difficult to empathize with Jardir's zealotry and violence, especially for returning readers, who will wonder when Arlen, the previous book's hero, will appear. Those willing to give Jardir his due will see him develop depth and perspective that give his inevitable confrontation with Arlen magnitude. This more brutal sequel emphasizes political and romantic intrigue without losing the urgency of the demon war.--Hutley, Krista Copyright 2010 Booklist
More book reviews at iDreamBooks.com