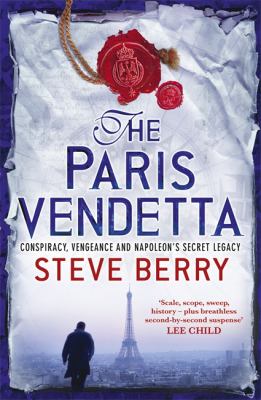 Genre/Form: Thrillers (Fiction) | Detective and mystery fiction.DDC classification: 813/.6 Summary: Former Justice Department operative Cotton Malone isn't looking for trouble when it comes knocking at his Copenhagen bookshop. But narrowly surviving a ferocious firefight convinces him to follow his unexpected new ally--an American Secret Service agent--and help him stop the Paris Club, a cabal of multimillionaires bent on manipulating the global economy. Only by matching wits with a terrorist-for-hire, foiling a catastrophic attack, and plunging into a desperate hunt for the legendary lost treasure of Napoleon Bonaparte can Malone hope to avert international financial anarchy.
Tags from this library: No tags from this library for this title. Log in to add tags.
Fiction notes: Click to open in new window

12.40 a.m. Copenhagen. Cotton Malone wakes up to find a stranger in his house, bearing bad news: Malone's closest and most dangerous friend, Henrik Thorvaldsen, is in serious trouble and the men who want to kill Thorvaldsen are on Malone's doorstep.Thorvaldsen has been tracking a shadowy group called the Paris Club. Not only does he believe that they are about to trigger a global financial meltdown, but also that one of the club's members murdered his son, Cai, two years ago. Thorvaldsen won't rest until he has avenged his boy's death.Dragged into his friend's schemes and secretly under pressure from the US government to stop both Thorvaldsen and the Paris Club, Malone soon discovers that the key to defeating the conspiracy and saving his friend's life and his own lies in the past, and an astounding treasure that Napoleon took to his grave.

Former Justice Department operative Cotton Malone isn't looking for trouble when it comes knocking at his Copenhagen bookshop. But narrowly surviving a ferocious firefight convinces him to follow his unexpected new ally--an American Secret Service agent--and help him stop the Paris Club, a cabal of multimillionaires bent on manipulating the global economy. Only by matching wits with a terrorist-for-hire, foiling a catastrophic attack, and plunging into a desperate hunt for the legendary lost treasure of Napoleon Bonaparte can Malone hope to avert international financial anarchy.

In Berry's latest page-turner after The Charlemagne Pursuit, Cotton Malone discovers a Secret Service agent breaking into his Copenhagen bookstore. The agent, Sam Collins, was sent by Cotton's friend Henrik Thorvaldsen to seek his help in getting revenge against the person Henrik has discovered to be responsible for his son's death. The guilty party has ties to a secret organization that plans to take down the global economy with help from a secret Napoleon carried to his grave. A race to solve historical riddles while staying alive ensues. Verdict Berry has written another amazing blend of suspense and history. Fans will love it, and for newcomers it's the perfect place to start. With the September release of Dan Brown's The Lost Symbol, savvy readers looking for more along those lines cannot go wrong with Cotton Malone. This will be Berry's biggest seller yet. [Library marketing campaign.]-Jeff Ayers, Seattle P.L. (c) Copyright 2010. Library Journals LLC, a wholly owned subsidiary of Media Source, Inc. No redistribution permitted.

Bestseller Berry deftly blends contemporary suspense and historical mystery in his fifth novel to feature former U.S. Justice Department operative Cotton Malone (after The Charlemagne Pursuit). Danish billionaire Henrik Thorvaldsen, a friend of Malone's, has become consumed with finding out who masterminded the slaughter outside a Mexico City courthouse two years earlier that killed seven people, including his young diplomat son. Once he learns that a wealthy British aristocrat was behind the outrage, Thorvaldsen gets entangled in a conspiracy that involves an elite group of ruthless financial experts planning to destabilize the global economy, a terrorist plot to destroy a European landmark, and a legendary cache hidden by Napoleon. Malone soon finds himself in a desperate struggle to save not only Thorvaldsen's life but the lives of countless innocents as well. While the plot takes a few predictable turns, this well-crafted thriller also offers plenty of surprises. 5-city author tour. (Dec.) (c) Copyright PWxyz, LLC. All rights reserved

Here's one of those cases where more of the same can be good, or it can be bad. If you're a fan of Berry's globe-trotting Cotton Malone thrillers, you'll probably be pleased to know that this one involves another conspiracy with a connection to a secret buried in the mists of history. The conspiracy this time is masterminded by the Paris Club, a group of powerful people who are determined to control the world's economy. To succeed, they will need to unleash the power of an ancient Coptic manuscript discovered in Egypt by Napoleon. But, as usual, Cotton Malone, the secret agent turned bookseller, is going to do everything he can to stop them. There is absolutely nothing wrong with this latest Malone adventure: Berry has turned out another action-packed adventure true to a winning formula. But the key word here is formulaic this Malone novel is pretty much the same as the ones that came before it, and readers who prefer their thrillers not to sound quite so much like they were produced by a writing machine may be well advised to steer clear. It's good to find a formula that works, but it's also good, every once in a while, to write outside the box. Still, Berry has a devoted following, and they like life inside the box just fine.--Pitt, David Copyright 2009 Booklist

Another historically tinged Cotton Malone thriller from Berry (The Charlemagne Pursuit, 2008, etc.). Awakened by late-night noises, the former U.S. Justice Department agent finds that his secondhand bookstore in Copenhagen has been broken into by Sam Collins, who was sent by Cotton's friend Henrik Thorvaldsen. Sam bears two crucial bits of news: 1) Henrik, the ber-rich owner of a centuries-old family porcelain business, is in trouble; 2) unknown quantities of armed bad guys are breaking into the shop as they speak. After scaring off two malefactors, Sam and Cotton head to Henrik's estate. His old friend, Cotton discovers, is about to infiltrate the Paris Club, a secret cabal of international financiers intent on bending the world's economy to their fiscal needs. Paris Club member Lord Graham Ashby was involved in the murder of his son, Henrik tells Cotton, and he has sworn revenge. He'll need the help of both Cotton and Sam, a former federal agent fired for maintaining a website that exposed conspiracies threatening the global financial system. The trio head to France, Henrik to ingratiate himself with Paris Club head Eliza Larocque, Sam and Cotton to gather intel from another online investigator of economic wrongdoing. Cotton learns that Stephanie Nelle, his former boss at the Justice Department, is planning an operation to take out the Paris Club and doesn't want Henrik getting in the way; he finds himself caught between his loyalties to Stephanie and to his friend. Berry steers the plot along a well-worn trajectory, past a rogue's gallery of cartoonish B-movie villains, through a series of easy-to-anticipate twists and turns, into outlandish action sequences and scenes tenuously connecting the contemporary story to actual past events. It all winds up with the requisite gun fight at a historic European cultural site. The author's research is impressive (the MacGuffin involves Napoleon), but expending some effort on plot and characterization would have been more impressive. Taxes credulity without even slightly taxing the intellect. Copyright Kirkus Reviews, used with permission.
More book reviews at iDreamBooks.com