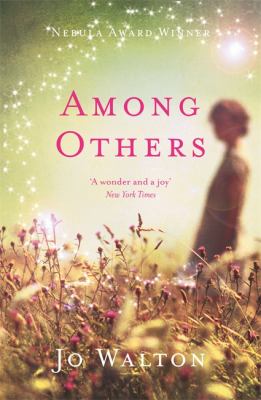 Among others / Jo Walton.

DDC classification: WAL Summary: Startling, unusual, and irresistibly readable, Among others is at once the compelling story of a young woman struggling to escape a troubled childhood, a brilliant diary of first encounters with the great novels of modern fantasy and science fiction, and a spellbinding tale of escape from ancient enchantment.
Tags from this library: No tags from this library for this title. Log in to add tags.
Total holds: 0

Startling, unusual, and yet irresistably readable, Among Others is at once the compelling story of a young woman struggling to escape a troubled childhood and a brilliant diary of first encounters.

Startling, unusual, and irresistibly readable, Among others is at once the compelling story of a young woman struggling to escape a troubled childhood, a brilliant diary of first encounters with the great novels of modern fantasy and science fiction, and a spellbinding tale of escape from ancient enchantment.

World Fantasy Award winner Walton (Tooth and Claw) spins an enchanting tale filled with libraries and magic through the pages of a young woman's diary. Morwenna and her twin, Morganna, spent their childhood sur-rounded by Welsh ruins and fairies. Torn from her sister and hiding from her crazy mother, Morwenna finds herself in the care of her estranged father and his eerily controlling sisters. Surrounded by things strange and unfamiliar, she struggles to find safety and balance through protective magic, enigmatic fairies, and the pages of sf and fantasy novels. Interlibrary loan privileges, a book club at the public library, and the handsome and disreputable Wim help Morwenna manage the cruelty of classmates and evade her mother's sorcerous clutches. But even protective magic leaves a trail, and Morwenna ends up fighting for her life and everything she's come to believe. Verdict A delightful reminder of the wonder and power of books and the libraries that keep them.-Jennifer Anderson, Texas A&M Univ.-Corpus Christi (c) Copyright 2011. Library Journals LLC, a wholly owned subsidiary of Media Source, Inc. No redistribution permitted.

World Fantasy Award-winner Walton (Tooth and Claw) turns the magical boarding school story inside out in this compelling coming-of-age tale. Welsh teen Morwenna was badly hurt, and her twin sister killed, when the two foiled their abusive mother's spell work. Seeking refuge with a father she barely knows in England, Mori is shunted off to a grim boarding school. Mori works a spell to find kindred souls and soon meets a welcoming group of science fiction readers, but she can feel her mother looking for her, and this time Mori won't be able to escape. Walton beautifully captures the outsider's yearning in Mori's earthy and thoughtful journal entries: "It doesn't matter. I have books, new books, and I can bear anything as long as there are books." Never deigning to transcend the genre to which it is clearly a love letter, this outstanding (and entirely teen-appropriate) tale draws its strength from a solid foundation of sense-of-wonder and what-if. (Jan.) (c) Copyright PWxyz, LLC. All rights reserved.

As she recovers from the confrontation with her mother that killed her twin sister, Mori keeps a journal permeated by a love of reading in this mesmerizing fantasy novel. Sent to a boarding school where she is desperately lonely and abandoned by the fairies who once kept her safe, Mori finds refuge in books, which are her instruction manuals and her joy. (Jan.) (c) Copyright 2011. Library Journals LLC, a wholly owned subsidiary of Media Source, Inc. No redistribution permitted.

With a deft hand and a blazing imagination, fantasy writer Walton mixes genres to great effect. Elements of fantasy, science fiction, and coming-of-age novels combine into one superlative literary package that will appeal to a variety of readers across age levels. After engaging in a classic good-magic-versus-bad-magic battle with her mother that fatally wounds her twin sister, 15-year-old Morwenna leaves Wales and attempts to reconnect with her estranged father. She was sent to boarding school in England, and her riveting backstory unfolds gradually as she records her thoughts, feelings, and experiences in a series of journal entries. An ominous sense of disquiet permeates the nonlinear plot as Morwenna attempts to avoid a final clash with her mother. In addition to casting an irresistible narrative spell, Walton also pays tribute to a host of science-fiction masters as she peppers Morwenna's journal with the titles of the novels she devours in her book-fueled quest for self-discovery.--Flanagan, Margaret Copyright 2010 Booklist
More book reviews at iDreamBooks.com