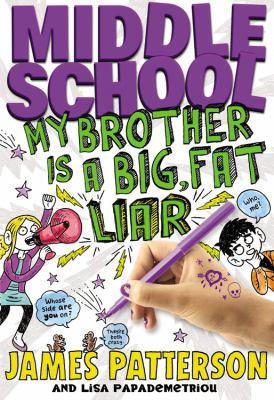 My brother is a big, fat liar / James Patterson and Lisa Papademetriou ; illustrated by Neil Swaab.

Georgia Khatchadorian-the sister of Rafe, the star of the first two Middle School books-plans to excel at Hills Village Middle School in all the places her troublemaking brother failed. She's even bet him that she'll quickly become one of the most popular girls in school, but no one will give her a chance!

Even worse, Rafe has sneakily set her up to embarrass herself in front of the snooty "Princesses" who run the school and the boy who's caught her eye. Will she be able to overcome her fears and win her bet with Rafe? Find out THE TRUTH about Rafe Khatchadorian's sister in the first Middle School story from the point of view of the hilarious Georgia-a girl who's ready to speak her mind!

Georgia Khatchadorian plans to excel at Hills Village Middle School in all the places her troublemaking brother failed.

Sequel to: Get me out of here.

Followed by: How I survived bullies, broccoli, and Snake Hill.

Gr 5-8-Middle-school fiction's most unreliable narrator, Rafe Khatchadorian, better watch his back because his sister, Georgia, has a thing or three to say about his version of life in their household. While she may be as unreliable as her brother, she's equally entertaining. Georgia is about to start middle school and is nervously looking forward to it. She likes school and is a great student. Not that she's bragging, but she actually skipped a grade. If she's a bit miffed about all the chores she does, like regularly making dinner, or about all the attention Rafe gets from their overworked single mother, she doesn't show it. Much. If she thought she could enter middle school and make her own mark, she soon finds out how wrong she is when teacher after teacher screeches, "Rafe Khatchadorian's sister???" She also learns that Rafe's nemesis has a little brother and he's gunning for Georgia, as are the three princesses led by Missy. The packaging and formula of this entry in the wildly popular series are what readers have come to expect: a first-person narrative containing many moments of mayhem, misbehavior, and irreverence, heavily and humorously illustrated. Oh, and don't forget the revelation of a big secret near the end. Fans will be pleased, and new readers will easily pick up the vibe. This installment will not sit long on the shelf.-Brenda Kahn, Tenakill Middle School, Closter, NJ (c) Copyright 2013. Library Journals LLC, a wholly owned subsidiary of Media Source, Inc. No redistribution permitted.

Can her first year of middle school possibly be worse for Georgia a smart, kind, creative girl known for good grades than it was for her older brother, Rafe, who set out to break every rule in the student handbook? Evidently it can, as Georgia describes her first weeks at the school where her brother's reputation turns every teacher against her and she becomes an instant target for the local mean girls. Told in first person by an admittedly unreliable narrator, Georgia's narrative seems, at times, less like her version of reality and more like a daydream, with a self-assured boyfriend materializing and her much-dreaded troubles evaporating in time for the story's happy climactic scene. In addition, Georgia adjusts with perhaps unrealistic speed to the revelation that she was adopted. Still, like the earlier Rafe books in the popular Middle School series, this amusing, well-paced novel, which features cartoon-like illustrations, offers an accessible, quick read for tweens.--Phelan, Carolyn Copyright 2010 Booklist

Georgia, Rafe's (Middle School: Get Me Out of Here!) sister, feels apprehensive about entering middle school. And with bullies, judgmental teachers, etc., her fears prove justified. But as Georgia's band prepares to play for the school dance, some new friends help her learn to stand up for herself. Georgia's energetic and imaginative narration weaves a wacky tale, which is enhanced by humorous black-and-white drawings. (c) Copyright 2013. The Horn Book, Inc., a wholly owned subsidiary of Media Source, Inc. No redistribution permitted.
More book reviews at iDreamBooks.com