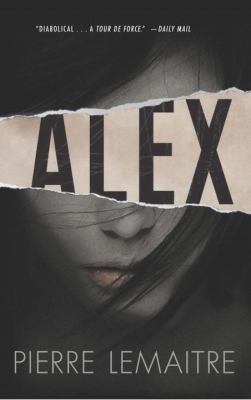 Alex / Pierre Lemaître ; translated from the French by Frank Wynne.

Genre/Form: Thrillers (Fiction) | Detective and mystery fiction. | Mystery and detective stories.DDC classification: [Fic] Summary: In kidnapping cases, the first few hours are crucial. After that, the chances of being found alive go from slim to nearly done. Alex Prevost - beautiful, resourceful, tough - may be no ordinary victim, but her time is running out. Commandant Camille Verhoeven and his detectives have nothing to go on: no suspect, no lead, rapidly diminishing hope. All they know is that a girl was snatched off the streets of Paris and bundled into a white van. The enigma that is the fate of Alex will keep Verhoeven guessing until the bitter, bitter end. And before long, saving her life will be the least of his worries.
Tags from this library: No tags from this library for this title. Log in to add tags.

Upon winning the prestigious 2013 Crime Writers Association International Dagger Award, the judges praised Alex by saying, "An original and absorbing ability to leash incredulity in the name of the fictional contract between author and reader... A police procedural, a thriller against time, a race between hunted and hunter, and a whydunnit, written from multiple points of view that explore several apparently parallel stories which finally meet."

Alex Prevost--kidnapped, savagely beaten, suspended from the ceiling of an abandoned warehouse in a tiny wooden cage--is running out of time. Her abductor appears to want only to watch her die. Will hunger, thirst, or the rats get her first?

Apart from a shaky eyewitness report of the abduction, Police Commandant Camille Verhoeven has nothing to go on: no suspect, no leads, and no family or friends anxious to find a missing loved one. The diminutive and brilliant detective knows from bitter experience the urgency of finding the missing woman as quickly as possible--but first he must understand more about her.

As he uncovers the details of the young woman's singular history, Camille is forced to acknowledge that the person he seeks is no ordinary victim. She is beautiful, yes, but also extremely tough and resourceful. Before long, saving Alex's life will be the least of Commandant Verhoeven's considerable challenges.

From the Hardcover edition.

In kidnapping cases, the first few hours are crucial. After that, the chances of being found alive go from slim to nearly done. Alex Prevost - beautiful, resourceful, tough - may be no ordinary victim, but her time is running out. Commandant Camille Verhoeven and his detectives have nothing to go on: no suspect, no lead, rapidly diminishing hope. All they know is that a girl was snatched off the streets of Paris and bundled into a white van. The enigma that is the fate of Alex will keep Verhoeven guessing until the bitter, bitter end. And before long, saving her life will be the least of his worries.

A Paris detective with a past and a hostage with a history will shape each other in this sinister crime thriller.ÅPolice commandant Camille Verhoeven is a skilled detective struggling to cope with the brutal kidnapping and murder of his wife and unborn son. Alex Prevost is a beautiful young woman snatched off the street mere blocks from her apartment. She is next seen in a series of gruesome photographs-naked, filthy, and trapped in a wooden cage hung six feet above the ground in an abandoned warehouse. As Camille and his team race against the clock to rescue Alex, events occur that lead them to question whether she is truly a damsel in distress. This kicks off a series of plot twists that propel the reader toward an unsettling conclusion. Brutal, dark, and gory, this crime thriller, a best seller in Europe, will keep readers turning the pages until well past bedtime-with all the lights on, of course. VERDICT Celebrated French mystery author Lemaitre makes his U.S. debut with this tense work of detective fiction that is intended to be the first volume in a trilogy but functions equally well as a stand-alone novel. Fans of John Connolly, John Lutz, and Kevin O'Brien are apt to enjoy Lemaitre's graphic prose and contemporary noir style. The diminutive and complex Camille, standing at just under five feet, is a memorable sleuth, but for readers searching for a strong female protagonist, Alex Prevost remains a puzzle at novel's end. [Previewed in "A World of New Titles: Editors' Picks, LJ 7/13.-Ed.]-Liv Hanson, Chicago (c) Copyright 2013. Library Journals LLC, a wholly owned subsidiary of Media Source, Inc. No redistribution permitted.

At the outset of French author Lemaitre's impressive American debut, the first in a trilogy, attractive 30-year-old Alex Prevost is shopping for wigs in a Paris shop when she spots a man waiting on the street who's clearly been following her. Perhaps he's just an admirer who wants to meet her, she thinks. That night, after dining alone at a restaurant, Alex is accosted on the sidewalk by a man who, after discarding the wig he initially grabbed and seizing her by her real hair, throws her into a white van. Soon Alex finds herself trapped inside a wooden crate suspended from the ceiling of an abandoned warehouse. Meanwhile, Commandant Camille Verhoeven throws himself into the kidnapping investigation as a way to deal with his grief over his wife's death, but he and his detectives have few clues to aid them in identifying Alex's abductor. An irritant to his superiors but respected by his subordinates, Verhoeven uses his diminutive stature to unsettle witnesses and suspects while surprising them with his intelligence and wit. Some unexpected plot twists will keep readers turning the pages. 150,000-copy first printing. (Sept.) (c) Copyright PWxyz, LLC. All rights reserved.

During the reign of Louis XVI, a cage was designed to inflict maximum torture. It was built so that the person in it could barely move his or her limbs. Muscles would atrophy, totally crippling the inhabitant. In this horror-film-like French suspense story, this type of cage has been updated and suspended from the ceiling of an abandoned warehouse filled with rats. After a young woman is forced into a van off a Paris street, police know their time is very limited to find the victim before she's murdered. Police Commandant Camille Verhoeven, whose own wife was kidnapped and killed, is forced into taking on the case, which moves, quickly, from kidnap to hostage drama. The details concerning the woman in the cage are reminiscent of Poe's The Pit and the Pendulum in their mounting despair. What the police uncover about the young woman sets them off in another, equally disturbing direction. Verhoeven's knowledge of kidnapping how it's a special crime, marked by a great deal of planning and with a demanding time line is fascinating. Filled with many twists and turns of plot, along with a huge surprise.--Fletcher, Connie Copyright 2010 Booklist

In this unpredictable, oddly delectable French thriller, an attractive young Parisian woman is abducted, chained in a crate and brutalized by an avenger--a crime that doesn't begin to hint at the gruesome killings to follow. The spoiler alert applies big-time to this book, the fourth of Lemaitre's novels featuring Police Commandant Camille Verhoeven and the first to be translated into English. The surprises, early and late, reboot the unusual narrative and redefine the case at hand. The quick-tempered, Danny DeVitoshort Camille is already feeling a bit shaky, having just returned to the force after four years. He suffered a breakdown following his wife Irene's murder--a crime for which his smooth, elegantly dressed sidekick, Louis, feels responsible. Though solving this new case ultimately helps Camille deal with his personal loss, he is dogged by his decision to return to work after Irene's death. But his guilt fades with each burst of intuition he has about the killings; the stranger the case becomes, the more he is drawn into it. A serial killer, deviant sexual behavior and hungry rats figure in the story. An eloquent thriller with a denouement that raises eyebrows as it speeds the pulse.]] Copyright Kirkus Reviews, used with permission.
More book reviews at iDreamBooks.com