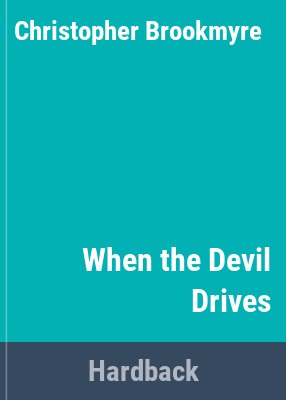 Genre/Form: Thrillers (Fiction) | Large type books. | Detective and mystery fiction.DDC classification: BRO Summary: "When private investigator Jasmine Sharp is hired to find Tessa Garrion, a young woman who has vanished without trace, it becomes increasingly clear that there are those who want her to stay that way. What begins as a simple search awakens a malevolence that has lain dormant for three decades, putting Jasmine in the crosshairs of those who would stop at nothing to keep their secrets buried. Uncovering a hidden history of sex, drugs, ritualism and murder, Jasmine realises she may need a little help from dark places herself if she's going to get to the truth; but then needs must ..."-- Publisher description.
Tags from this library: No tags from this library for this title. Log in to add tags.

When private investigator Jasmine Sharp is hired to find Tessa Garrion, a young woman who has vanished without trace, it becomes clear that there are those who want her to stay that way.

"When private investigator Jasmine Sharp is hired to find Tessa Garrion, a young woman who has vanished without trace, it becomes increasingly clear that there are those who want her to stay that way. What begins as a simple search awakens a malevolence that has lain dormant for three decades, putting Jasmine in the crosshairs of those who would stop at nothing to keep their secrets buried. Uncovering a hidden history of sex, drugs, ritualism and murder, Jasmine realises she may need a little help from dark places herself if she's going to get to the truth; but then needs must ..."-- Publisher description.

What's not to like about a befuddled, yet plucky, wee lassie of an amateur detective? That's the question posed by this follow-up to 2012's Where the Bodies Are Buried. Aspiring actress Jasmine Sharp has inherited her late uncle's detective agency and, with the publicity attached to her first case, now has a number of actual, paying clients. One such hires Jasmine to discover the whereabouts of her much younger sister, Tessa, who disappeared 30 years ago. Tessa had been a brilliant actress in a cutting-edge Glasgow theater company and then-nothing. All of the other members of the troupe have risen to the top of Scottish society. And all refuse to speak to Jasmine, who is forced to wonder if witchcraft might be the only explanation for their meteoric rise. Meanwhile DS Catherine McLeod investigates the murder of a prominent Scottish arts figure. Only gradually do the strands of these two stories blend, and once more Jasmine runs rings around her police counterpart. Verdict Amid the Shakespearean allusions, the densely layered characterizations, and satiric asides about Scottish society, readers who enjoy the Glasgow-based mysteries of Denise Mina will be hard-pressed to find fault with our Scottish lass and will eagerly await the seemingly inevitable, and fiery, face-off between Jasmine and Catherine that surely will come as the series progresses.-Bob Lunn, Kansas City, MO (c) Copyright 2013. Library Journals LLC, a wholly owned subsidiary of Media Source, Inc. No redistribution permitted.

In Brookmyre's satisfying second Glaswegian thriller featuring PI Jasmine Sharp and Det. Supt. Catherine McLeod (after 2011's Where the Bodies Are Buried), Alice Petrie asks Jasmine to track down her sister, Tessa Garrion, a burgeoning stage actress whom Petrie hasn't seen since their mother's funeral in 1981. Meanwhile, out at Cragruthes Castle in Argyll, Catherine and her team look into the demise of actor Hamish Queen, shot dead in the middle of an outdoor theater performance. While Queen had artistic rivals, a motive for murder remains elusive. The more Jasmine learns about Tessa, the less convinced she becomes that Petrie's sister is still alive. A member of Glass Shoe Company, one of Queen's early 1980s theater efforts, Tessa fell off the map after a drug- and sex-fueled summer, a time no one else wants to discuss. Inevitably, Jasmine's and Catherine's investigations collide, but Brookmyre wisely holds off on the true connections until the chilling climax. Agent: Caroline Dawnay, United Agents (U.K.) (May) (c) Copyright PWxyz, LLC. All rights reserved.

*Starred Review* Two female crime fighters muster all their moxie and mental acumen in international best-seller Brookmyre's second in a stellar series set in Scotland. Aspiring actress turned private investigator Jasmine Sharp's search for a woman's long-lost sister brings her back into the world of professional theater. (It is a bittersweet reunion; Jasmine always wondered what her life would have been like had she continued to tread the boards.) This time, however, the drama is very real: a 30-year-old unsolved mystery that could shatter the reputations of a few much-touted theater icons. Meanwhile, Detective Superintendent Catherine McLeod contemplates clues in the murder of a theatergoer who stepped onstage for a photo shoot following a performance of A Midsummer Night's Dream. (Talk about your reverie turned nightmare.) The lives of the two sleuths seemed destined to intersect, and consummate crime-fiction writer Brookmyre (Where the Bodies Are Buried, 2012) is a master at rendering ingenious, intertwining plots. Sharply drawn characters and an idyllic Scottish setting add further appeal to this engaging entry in which foul play's the thing.--Block, Allison Copyright 2010 Booklist

Jasmine Sharp, the drama school dropout who became an unlikely Glasgow PI in Where the Bodies Are Buried (2012), looks into the 1981 disappearance of a young actress--a case that overlaps a fresh murder investigation in the Highlands by Detective Superintendent Catherine McLeod. The orphaned daughter of an actress, Jasmine got her start as an investigator when her uncle, Jim, an ex-cop, convinced her she could use her thespian skills working for his investigative agency. Having inherited the company following Jim's disappearance and murder, Jasmine is hired by a woman to find out what happened to her younger sister Tessa, who fell off the face of the earth in 1981. After Jasmine questions hotshot theater producer Hamish Queen, whom Tessa was last seen working for, he is shot dead by a sniper at a performance of A Midsummer Night's Dream outside a castle. Catherine, who has been arguing with her husband over their teenage son's desire for a sniper-themed video game, finds herself on the trail of a real-life shooter. Jasmine, with the help of Glen Fallan--the mysterious gangland enforcer who became her guardian angel in Where the Bodies Are Buried--overcomes threats to her well-being to uncover a conspiracy involving drugs, sex, satanic cults and changed names. Brookmyre pushed against the restraints of crime fiction with his "Tartan noir" series featuring investigative reporter Jack Parlabane and his outlandish satirical novels. But following the very good Bodies, which returned him to mainstream fare, he's in tame whodunit mode. The flashback plot is tired. The scaling back of Catherine's presence denies us the pleasure of seeing the two female investigators cross paths. And though never less than likable, Jasmine loses charm as she gains confidence, something one hopes the author will reverse in future books. With its running social commentary and bits on Scottish theater and politics, this is an entertaining book. But its predecessor was livelier and more brimming with incident.]] Copyright Kirkus Reviews, used with permission.
More book reviews at iDreamBooks.com