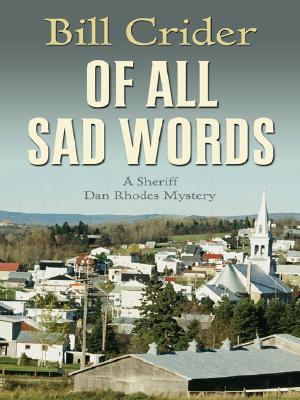 Of all sad words [text (large print)] / by Bill Crider.

A surprising journey from tech support to professional marksman in front of the cameras.

Cheng covers his approach to staying calm under pressure, teamwork, sportsmanship, and leadership. These traits contributed to his coming out on top and staying above the fray. Shoot to Win with Top Shot champion Chris Cheng provides fun and interesting insight into the Top Shot experience. Additionally, Cheng reveals very personal information about his life that never aired on the show, and he discusses how it was a key part of his Top Shot experience.

With a foreword written by Top Shot season 3 champion Dustin Ellermann and an afterword written by the original Top Shot champion Iain Harrison, Shoot to Win is sure to please shooters of all stripes, but especially fans of History Channel's program Top Shot .

"A Citizen's Sheriff's Academy sounds like a good idea when Sheriff Dan Rhodes presents it to the county commissioners. But when a mobile home explodes, the students become the chief suspects. And when a dead man is found nearby, it appears that a regular crime wave is rolling through Blacklin County." -- BOOK JACKET

Crider's winning 15th Sheriff Dan Rhodes mystery (after 2007's Murder Among the OWLS) pits the wry Texan against a local drug ring. Skeptical when Clearview, Tex., newcomer C.P. Benton complains that his neighbors, the Crawford brothers, are cooking meth, Rhodes finds himself in the middle of a murder investigation when the Crawford trailer explodes, leaving one of the brothers dead. But instead of finding evidence of meth, Rhodes stumbles on a still with a fresh batch of old-fashioned hooch. The remaining Crawford brother plays dumb, blaming his sibling for the illegal operation, but Rhodes doesn't buy the act. The discovery of a second still complicates matters, and Rhodes must ignore his bickering deputies and a whiny county commissioner to get to the bottom of Clearview's crime wave. Crider expertly evokes this small Texas town and its eccentric cast of characters, and his dry humor will satisfy longtime fans of this popular series. (Feb.) (c) Copyright PWxyz, LLC. All rights reserved

To Sheriff Dan Rhodes of Blacklin County, Texas, the saddest words of all are it seemed like a good idea at the time. The phrase seems applicable to Rhodes' Citizen's Sheriff Academy, which offers citizens a primer on police work and even the opportunity to visit  a pistol range, all with an eye toward developing more respect for law enforcement. But when a mobile home blows up and one of the two brothers living there is murdered, the suspect list contains more than a few Sheriff Academy alums. And, as Rhodes eliminates academy grads, they morph into unwelcome assistants or investigatory critics. Also on the sheriff's radar screen are two new residents with sketchy backgrounds who have opened a music shop tuba, anyone? and, apparently, a bootlegging operation on the side. Crider delivers his usual meticulously interwoven plot threads colored by Rhodes' dry humor. An excellent entry in a very fine series.--Lukowsky, Wes Copyright 2008 Booklist

Sheriff Dan Rhodes must cope with bootlegging, murder and a dazzling fictional alter ego. Something rare, something phenomenal, is about to happen in backwater Blacklin County, Texas: a book signing. Claudia and Jan, those writing ladies from out of town, have performed as promised, and the result is now between lurid hard covers. Blood Fever stars "a handsome, crime-busting sheriff" named Sage Barton, modeled, the authors say, on handsome, crime-busting Sheriff Dan Rhodes. He's embarrassed, of course, but a touch of celebrity can be heady as well as irritating. So he agrees to make an appearance at the event, autograph pen in hand. Meanwhile, there are more workaday matters requiring his attention. Someone has pumped two bullets into Terry Crawford just before blowing up his mobile home, leaving Larry Crawford minus a twin and a roof over his head. Why does the surviving twin seem less stricken than he should be? Following the whisky fumes and the money, Sheriff Dan finds a passel of crimes, busts the perpetrators and thumbs his nose at invidious comparisons. Shrewd, low-key Sheriff Dan (Murder Among the O.W.L.S., 2007, etc.) remains an engaging lawman who runs his tiny department with all the professionalism of the 87th Precinct. Copyright ©Kirkus Reviews, used with permission.
More book reviews at iDreamBooks.com