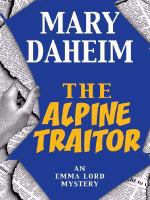 After Emma Lords newspaper becomes the victim of a hostile takeover, the person behind the acquisition winds up dead--and Emma is the prime suspect. It turns out that the victim was not only after Emmas business, he was a front man for the heirs of her longtime lover, Tom Cavanaugh.

"An Emma Lord mystery" -When Alpine's newspaper, "The Advocate, " narrowly escapes a potential hostile takeover, Emma Lord finds herself on the top of the suspect list when the person behind the bid turns up dead.

When Alpine's newspaper, "The Advocate, " narrowly escapes a potential hostile takeover, Emma Lord finds herself on the top of the suspect list when the person behind the bid turns up dead.

Murder and mayhem once again rock the placid town of Alpine, Wash., in Daheim's 20th cozy to feature newspaper publisher Emma Lord (after 2007's The Alpine Scandal). When the two grown children of Emma's deceased long-ago lover, Tom Cavanaugh, offer to buy her paper, the Advocate, Emma refuses. Soon after leaving for Seattle for the weekend, Emma gets a phone call from Sheriff Milo Dodge, who tells her the driving force behind the attempted takeover, Tom's daughter's husband, Dylan Platte, has been murdered. A suspect herself, Emma joins Milo in the search for Dylan's killer. Not until violence strikes again, this time close to home, can Emma put the pieces together and come to terms with Tom, his family and her own painful past. An intriguing plot and the usual cast of lovable characters make this another winner. (Feb. 26) (c) Copyright PWxyz, LLC. All rights reserved

In this twentieth installment in the long-running series, small-town newspaper owner Emma Lord must deal with a buyout attempt from her former fiancé's children as well as train an inept reporter in how to write for her weekly paper. When one of the would-be purchasers is murdered, Emma becomes a suspect and begins her own investigation, which prompts memories of her own fiancé, who left her pregnant and alone years ago. Emma is a likable, principled, caring character and an engaging narrator, and her account of the trials of running a small newspaper provides a fascinating frame.--O'Brien, Sue Copyright 2008 Booklist