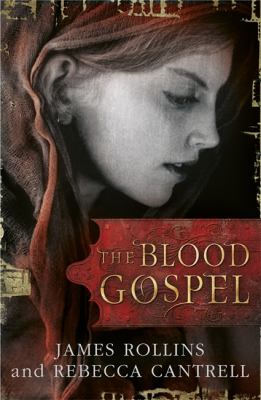 | Christian sects -- FictionGenre/Form: Thrillers (Fiction) | Detective and mystery fiction. | Christian fiction. | Historical fiction.DDC classification: 813.54 Summary: After a shocking discovery in Masada, Israel, Sergeant Jordan Stone, Father Rhun Korza and Dr. Erin Granger, racing against time to recover a book written by Christ's own hand, must contend with a force of ancient evil with impossible ambitions and a secret sect within the Vatican called the Sanguines.
List(s) this item appears in: Christian Fiction
Tags from this library: No tags from this library for this title. Log in to add tags.
Fiction notes: Click to open in new window

When a devastating earthquake in Masada, Israel, reveals a tomb buried in the heart of the mountain, a trio of investigators - Sergeant Jordan Stone, a military forensic expert; Father Rhun Korza, a Vatican priest; and Dr Erin Granger, a brilliant archaeologist - are sent to explore the macabre discovery, a subterranean temple holding the crucified body of a mummified girl. But a brutal attack at the site sets the three on the run, thrusting them into a race to recover what was once preserved in the tomb's sarcophagus: a book rumoured to have been written by Christ's own hand, a tome that is said to hold the secrets to His divinity. But the enemy who hounds them is like no other, a force of ancient evil directed by a leader of impossible ambitions and incalculable cunning. From crumbling tombs to splendorous churches, Erin and her two companions must confront a past that traces back thousands of years, to a time when ungodly beasts hunted the dark spaces of the world, to a moment in history when Christ made a miraculous offer, a pact of salvation for those who were damned for eternity. Here is a novel that is explosive in its revelation of a secret history.Why do Catholic priests wear pectoral crosses? Why are they sworn to celibacy? And why does Catholicism insist that the consecration of wine during Mass results in its transformation to Christ's own blood? The answers go back to a secret sect within the Vatican, one whispered as rumour but whose very existence was painted for all to see by Rembrandt himself, a shadowy order known simply as the Sanguines.

After a shocking discovery in Masada, Israel, Sergeant Jordan Stone, Father Rhun Korza and Dr. Erin Granger, racing against time to recover a book written by Christ's own hand, must contend with a force of ancient evil with impossible ambitions and a secret sect within the Vatican called the Sanguines.

Masada, in modern-day Israel: a devastating earthquake kills hundreds in the area and reveals an ancient tomb-temple buried in the rock plateau underlying the ancient fortress. A trio of investigators-Sgt. Jordan Stone, a military forensics expert; Father Rhun Korza, a Vatican priest; and Dr. Erin Granger, a brilliant but disillusioned archaeologist-are sent to explore the subterranean temple, which holds the mummified body of a crucified girl. A brutal attack at the site sets the investigators on the run, thrusting them into a race to recover what was once preserved in the tomb's sarcophagus: a book rumored to have been written by Christ in his own blood, and said to hold the secrets to his divinity. The enemy who hounds them is like no other, a force of ancient evil including vampires and vampirelike animals. VERDICT This work is all thriller fans would expect from a combination of Rollins (Bloodline) and the Macavity Award-winning Cantrell (A Trace of Smoke): cutting-edge science, ancient history, and a solid gothic mystery plot. Publishing plans call for this to be a trilogy, but this combination may be just too good to stop with only three books. Fans of the authors will not be disappointed, and those who lapped up The Da Vinci Code will be clamoring for more in this series. [See Prepub Alert, 7/15/12; the prequel, City of Screams, is available as a digital original: ebk. ISBN 9780062262561-Ed.]-Vicki Gregory, Univ. of South Florida SIS, Tampa (c) Copyright 2013. Library Journals LLC, a wholly owned subsidiary of Media Source, Inc. No redistribution permitted.

This ponderous collaboration between Rollins (Bloodline) and Cantrell (A City of Broken Glass) opens with an arresting prologue set in first-century Israel. As the Jewish defenders of Masada prepare for their mass suicide, their leader, Eleazar, ritually sacrifices a young girl in a cave below the mountain fortress. Flash forward to the present, when a cataclysmic explosion destroys Masada, leaving as sole survivor a boy whose cancer was cured by the toxic smoke that emanated from below the mountain. At the request of the Israeli government, archeologist Erin Granger joins forces with Sgt. Jordan Stone, an American Army Ranger, to find out what caused the catastrophe. Add a peculiar Catholic priest and a lost gospel to the attractive male-female team and its quest for the truth, and you have yet another religious thriller with a gimmick that fails to match that of The Da Vinci Code. Agents: (for Rollins) Russ Galen and Danny Baror; (for Cantrell) Elizabeth Evans, Mary Alice Kier, and Anna Cottle. (Jan.) (c) Copyright PWxyz, LLC. All rights reserved.

Rollins, noted for his fast-paced thriller-adventure novels, often decorated with religious iconography, and Cantrell, a writer of historical mysteries with Nazi Germany as the backdrop, combine their talents for this mash-up of thriller and paranormal. After an earthquake destroys the Israeli fortress of Masada, the race is on to find a Jesus gospel that two groups suspect is in the rubble. One is the striogi, soulless, vampirelike creatures, led by evil, tortured Bathory, doing the bidding of Him. The other is the Sanguines, priests protected by the blood of Christ, called to battle the striogi. When Masada falls, archaeologist Erin Granger is there to find artifacts in the destruction. She and Sergeant Jordan Stone, an American soldier, meet the Vatican representative (and Sanguine extraordinaire) Father Rhun Korza, and after that, all hell breaks loose. This could have been an unholy mess, but as in Rollins' previous books, the pacing is heart-pounding and the conceit irresistible. At first, the introduction of ghouls seems gimmicky, but the authors suck you in and make it work. The Da Vinci Code meets vampires. HIGH-DEMAND BACKSTORY: This first in the Order of the Sanguines series has one hot-name author, one warm one, and a big marketing campaign backing it up.--Cooper, Ilene Copyright 2010 Booklist

An entertaining if sometimes far-fetched religious-tinged thriller by mysterians Rollins (Bloodline, 2012, etc.) and Cantrell (A City of Broken Glass, 2012, etc.). What if the Vatican were built atop a pet cemetery or the moral equivalent of an Indian burial ground? What if Herod's Massacre of the Innocents had actually happened? What if Saint Peter, the rock on which the church was built, was an action hero? All these possibilities pop up in Rollins and Cantrell's confection, which operates on the always tetchy premise that Christ's blood sacrifice finds responses in the blood sacrifices of others, including unwilling virgins--or so the evidence suggests when an earthquake in Masada, site of yet another blood sacrifice all those years ago, exposes a cave inside of which is found the mummy of a girl throwing most curious mudras. Soon, an unlikely cast from the worlds of archaeology, religion, warfare and crime fighting descends on the place, and what they piece together over the course of the narrative threatens--natch--to shake the world of organized Christianity to the ground, not least because Christ himself has a few revisions to make in the record. There are lots of Indiana Joneslike moments throughout ("It is no mere weapon," says a warrior priest. "It's a symbol of Christ. That is beyond weaponry."), a little romance, lots of car chases and explosions, and lots of oddball twists, including encounters with a strange Russian priest named Rasputin, a mysterious Eastern European heavy with the most suggestive name of Bathory and a gaggle of goal-oriented fanatics. And does the firmament crack open as the "great War of the Heavens looms"? That depends on whether you see room for a sequel at the end of this romp. Good escapist reading in the Dan Brown vein. And these writers can write.]] Copyright Kirkus Reviews, used with permission.
More book reviews at iDreamBooks.com