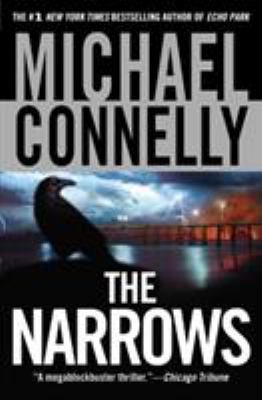 The narrows : a novel / Michael Connelly.

Genre/Form: Psychological fiction.DDC classification: [Fic] Summary: When an infamous serial killer known as the Poet reemerges, FBI agent Rachel Walling, long haunted by her unsuccessful efforts to bring him to justice, receives assistance from LAPD detective Harry Bosch.
Tags from this library: No tags from this library for this title. Log in to add tags.
Fiction notes: Click to open in new window

In the depths of the Nevada desert, FBI agent Rachel Walling and former LAPD Detective Harry Bosch must confront The Poet, a terrifying serial killer who leads them down a dark and twisted path.
FBI agent Rachel Walling finally gets the call she's dreaded for years, the one that tells her the Poet has surfaced. She has never forgotten the serial killer who wove lines of poetry in his hideous crimes -- and apparently he has not forgotten her.
Former LAPD detective Harry Bosch gets a call, too -- from the widow of an old friend. Her husband's death seems natural, but his ties to the hunt for the Poet make Bosch dig deep. Arriving at a derelict spot in the California desert where the feds are unearthing bodies, Bosch joins forces with Rachel. Now the two are at odds with the FBI . . . and squarely in the path of the Poet, who will lead them on a wicked ride out of the heat, through the narrows of evil, and into a darkness all his own . . .

When an infamous serial killer known as the Poet reemerges, FBI agent Rachel Walling, long haunted by her unsuccessful efforts to bring him to justice, receives assistance from LAPD detective Harry Bosch.

There's a gravitas to the mystery/thrillers of Michael Connelly, a bedrock commitment to the value of human life and the need for law enforcement pros to defend that value, that sets his work apart and above that of many of his contemporaries. That gravitas is in full force in Connelly's newest, and as nearly always in the work of this talented writer, it supports a dynamite plot, fully flowered characters and a meticulous attention to the details of investigative procedure. There are also some nifty hooks to this new Connelly: it features his most popular series character, retired L.A. homicide cop Harry Bosch, but it's also a sequel to his first stand-alone, The Poet (1996), and is only his second novel (along with The Poet) to be written in both first and third person. The first-person sections are narrated by Bosch, who agrees as a favor to the widow to investigate the death of Bosch's erstwhile colleague and friend Terry McCaleb (of Blood Work and A Darkness More Than Night). Bosch's digging brings him into contact with Rachel Walling, the FBI agent heroine of The Poet, and the third-person narrative concerns mostly her. Though generally presumed dead, the Poetthe serial killer who was a highly placed Fed and Walling's mentoris alive and killing anew, with, we soon learn, McCaleb among his victims and his sights now set on Walling. The story shuttles between Bosch's California and the Nevada desert, where the Poet has buried his victims to lure Walling. The suspense is steady throughout but, until a breathtaking climactic chase, arises more from Bosch and Walling's patient and inspired following of clues and dealing with bureaucratic obstacles than from slash-and-dash: an unusually intelligent approach to generating thrills. Connelly is a master and this novel is yet another of his masterpieces. (One-day laydown, May 3) Forecast: Connelly should hit #1 with this even without trying, but he and Little, Brown are going all out to support the novel, with plans including a 15-city author tour, a Today Show appearance and the distribution to media and bookstores of a DVD, Michael Connelly's Los Angeles, narrated by CSI star William Petersen. Simultaneous Time Warner Audio and large print edition. (c) Copyright PWxyz, LLC. All rights reserved

Too often when crime novelists bring together characters from different series or combine plot strands from earlier novels, the results seem awkward (like inviting two separate groups of friends to the same party). Not so with Connelly, whose latest Harry Bosch novel seamlessly intermingles material from the author's previous work. Readers of Connelly's The Poet (1996) have known that Bob Backus, former FBI profiler turned Poe-spouting serial killer, would be back eventually, and here he is, attempting to stage-manage a grand finale. Bosch, now a PI after retiring from the LAPD, becomes involved when the wife of FBI agent Terry McCaleb ( Blood Work and A Darkness More Than Night) hires him to determine if her husband's death was suicide or murder. The trail leads quickly to Las Vegas and the resurfaced Backus, who is being tracked by his former FBI colleagues, including his onetime protege Rachel Walling (also from The Poet). Expertly juggling the narrative between Bosch's brooding, hard-boiled voice and a broader third-person perspective that takes in the points of view of Walling and the Poet, Connelly builds tension exponentially through superb use of dramatic irony. A stunning finale in the Narrows--the cement-lined Los Angeles River, which transforms itself during a storm from a harmless puddle into a rampaging death trap--works on multiple levels, satisfying both plot-hungry suspense addicts and character-driven Bosch devotees, who will stick with their hero--he of the seen-it-all-twice eyes --on his journey into the metaphorical narrows, where evil would grab at me like an animal and take me down into the black water. This is Connelly at the top of his game. --Bill Ott Copyright 2004 Booklist
More book reviews at iDreamBooks.com