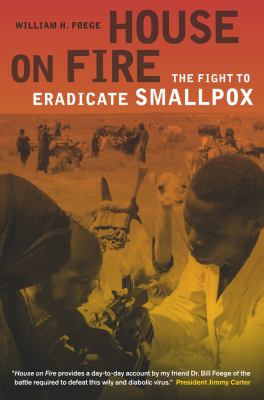 A story of courage and risk-taking, House on Fire tells how smallpox, a disease that killed, blinded, and scarred millions over centuries of human history, was completely eradicated in a spectacular triumph of medicine and public health. Part autobiography, part mystery, the story is told by a man who was one of the architects of a radical vaccination scheme that became a key strategy in ending the horrible disease when it was finally contained in India. In House on Fire, William H. Foege describes his own experiences in public health and details the remarkable program that involved people from countries around the world in pursuit of a single objective--eliminating smallpox forever. Rich with the details of everyday life, as well as a few adventures, House on Fire gives an intimate sense of what it is like to work on the ground in some of the world's most impoverished countries--and tells what it is like to contribute to programs that really do change the world.

A Center for Disease Control (CDC) epidemiologist assigned to the World Health Organization (WHO) smallpox eradication team in India in the 1970s, Foege (Global Health Leadership and Management) had a front-row seat for the global fight to eliminate smallpox. Now a Senior Fellow at the Gates Foundation, he recounts his experiences in Africa and India while generously sharing credit with his CDC and WHO colleagues and the almost 250,000 Indian government public health workers directed by doctor M.I.D. Sharma. With human-to-human transmission interruptible by an effective vaccine, smallpox became the 1958 World Health Assembly's target after millennia of killing, scarring, and sometimes blinding its victims. Foege was instrumental in developing a plan to identify and contain emerging outbreaks, rather than pursuing the nearly impossible goal of 100 percent vaccination rates. Though controversial, this "surveillance/containment" approach eliminated smallpox in India within only 20 months of its implementation. Verdict There are several recent books on the conquest of smallpox (e.g., D.A. Henderson's Smallpox: The Death of a Disease), but this is a readable and thorough account by a key player in this outstanding victory for public health.-Kathy Arsenault, St. Petersburg, FL (c) Copyright 2011. Library Journals LLC, a wholly owned subsidiary of Media Source, Inc. No redistribution permitted.
More book reviews at iDreamBooks.com