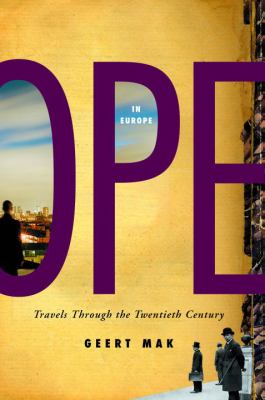 In Europe : travels through the twentieth century / Geert Mak.

Geert Mak spent the year of 1999 criss-crossing the continent, tracing the history of Europe from Verdun to Berlin, Saint Petersburg to Auschwitz, Kiev to Srebrenica. He set off in search of evidence and witnesses, looking to define the condition of Europe at the verge of a new millennium. The result is mesmerizing: Mak's rare double talent as a sharp-eyed journalist and a hugely imaginative historian makesIn Europea dazzling account of that journey, full of diaries, newspaper reports and memoirs, and the voices of prominent figures and unknown players; from the grandson of Kaiser Wilhelm II to Adrinana Warno in Poland, with her job at the gates of the camp at Birkenau. But Mak is above all an observer. He describes what he sees at places that have become Europe's wellsprings of memory, where history is written into the landscape. At Ypres, he hears the blast of munitions from the Great War that are still detonated there twice a day. In Warsaw, he finds the point where the tram rails that led to the Jewish ghetto come to a dead end in a city park. And in an abandoned nursery school near Chernobyl, where tiny pairs of shoes still stand in neat rows, he is transported back to the moment time stood still in the dying days of the Soviet Union. Mak combines the larger story of twentieth-century Europe with details that give it a face, a taste and a smell. His unique approach makes the reader an eyewitness to a half-forgotten past, full of unknown peculiarities, sudden insights and touching encounters.In Europeis a masterpiece; it reads like the epic novel of Europe's most extraordinary century.

Dutch journalist and historian Mak (Amsterdam: A Brief Life of the City) was commissioned by the respected Dutch newspaper NRC Handelsblad to travel throughout Europe for one year reporting on the state of the districts he visited and placing them in the context of their 20th-century past. The result is an absorbing account in 66 short chapters divided by chronological time period (1900-99) and by the 12 months of the author's journey. Mak is a sensitive and perceptive observer as he takes us through the 20th century-from Verdun to Berlin, from St. Petersburg to Istanbul, from Chernobyl to Srebrenica-weaving history, eyewitness accounts, his own impressions, and ambience into a short narrative that captures in lapidary prose the essence of each place. At nearly 900 pages, this is a doorstopper. But beautifully written, skillfully translated by Garrett, and in its format of short chapters that keeps with its daily newspaper origins, it is suitable for a year's worth of thought and reflection on Europe now and in its tumultuous 20th century. Appropriate for academic and public libraries and essential for collections supporting lovers of nonfiction. [More than 250,000 copies of the original edition sold in Holland.-Ed.]-Barbara Walden, Univ. of Wisconsin Lib., Madison (c) Copyright 2010. Library Journals LLC, a wholly owned subsidiary of Media Source, Inc. No redistribution permitted.

On January 4, 1999, Mak, a journalist and one of the Netherlands' most popular authors, set out from Amsterdam on assignment for his newspaper, the NRC Handelsblad, to crisscross Europe in the final year before the millennium to discover "what shape the continent was in." And crisscross he did: Vienna, London; Stalingrad (now Volgograd), Chernobyl, Lourdes, Budapest; Srebrenica and dozens more. For his columns, collected here, Mak used his reporter's eye to describe the vividness of the countryside and cityscapes through which he traveled, his writer's ear to interview individuals who had experienced Europe's most terrible and terrific times, and his historian's pen to narrate the passing of that most extraordinary of centuries. What Mak discovered was that while "Europe" is turning itself into an ostensible "union," there is unexpectedly "little in the way of a shared historical experience." There is no European people, for instance, and every nation has conceived its own version of the catastrophic First and Second World Wars. Mak's brilliant compendium is difficult to define-is it a history book, a travelogue, a memoir?-but stands out as a remarkable, insightful, exhilarating exposition on that peculiar continent across the Atlantic. Map. (Aug. 7) (c) Copyright PWxyz, LLC. All rights reserved

As the European project surges from six founding nation-states to 25, and as it now extends from the Atlantic to the Black Sea and the Arctic to the Mediterranean, some 900 pages of analysis in 66 vignettes is probably justified. The latter constitute the spatial devices for Mak's rich insights into wars, mores, personalities, dramas, and the rich tapestry of complex experiences that make Europe the "most successful experiment in the field of international political institutions" since WWII. It is the largest market, exporter, and foreign investor and has evolved from a patchwork of separate states into a "new supercountry" that is uniquely not an empire or a federation. For Mak, while the "Europe project" is a resounding success as a peace process and economic organization, it will fail "unless a common cultural, political and, above all, democratic space is soon created alongside the rest." Of course, there is no room for illustrations, although Mak provides maps for each of the ten itineraries. Nor are there footnotes or references to accompany what is essentially a series of rich reflexive essays on one man's reaction to this evolving place. They stand alone. Summing Up: Recommended. Most levels/libraries. B. Osborne Queen's University at Kingston

"*Starred Review* Sweeping in scope, brimmming with luxurious and telling detail, electric in prose style, and deeply comprehending in its understanding of the subject, this Dutch writer's magnum opus is the result of a commission he accepted from the newpaper he worked for: a record of his year-long travels throughout Europe at the end of the millennium. His charge was to see if a workable definition of Europe still had relevance specifically, if there exists sufficient commonality among the European nations to make a definition feasible. The second layer of his writings takes the form of his simultaneous consciousness of the history of each place he visited; it came home to him during his jaunts that all the different stages of the twentieth century are being lived, or relived, somewhere. The history of the twentieth century, he discovered, was indelibly etched into how almost all Europeans have led their lives at any point in the century. Mak moves thoroughly but nimbly through both time and location, correlating now to then in particularly dramatic episodes, resulting in a beautiful way to learn about both European history and current events."--"Hooper, Brad" Copyright 2007 Booklist

An international bestseller, this epic work follows the flow of time through European locales almost as a geologist follows a riverbed. Dutch journalist Mak (Amsterdam, 2000, etc.) walks the streets--from Paris, London, Berlin and Rome to Stalingrad, Srebenica and Sarajevo--haunting the libraries and reading rooms, looking into faces that reveal like maps the traces of what has gone by. He is simultaneously a tourist, detective and storyteller: The broad, beautiful boulevards and arterials of Paris or Vienna, for example, were not planned primarily on the basis of aesthetics, he reminds us; their purpose was to move an army speedily to any site of riot or rebellion. Out of such stories flows a compelling vision of a fractured, segmented, yet terminally conjoined Europe, where socialized humanity strives on as its leaders continually fail. At one of Europe's bloodiest World War I battlefields, Ypres, where half of Corporal Adolf Hitler's unit was wiped out as the allies checked Germany's advance for good, Mak simply wonders out loud why there couldn't have been one more marker among those in the "H" section of the expansive German graveyard. He neatly fits crucial information into such contexts with sometimes disarming familiarity. For example, Mak points to the desperate pleas for restraint exchanged between Germany's Kaiser Wilhelm and Czar Nicholas of Russia during the panic preceding the First War; signed "Cousin Willy" and "Cousin Nicky," the letters reflect the helplessness of an interrelated royalty in the clutch of larger forces. The Hapsburgs vaporized, leaving behind century-defying animosities that Mak reminds us flamed up again in World War II and even into the 1990s in Bosnia. The gap between have-not Eastern Europe and the haves in the West continues to widen, he warns. An adventure in history packed with details--some intimate, some surprising, some shocking, and all convergent into an essential, coherent story of modern Europe. Copyright ©Kirkus Reviews, used with permission.
More book reviews at iDreamBooks.com