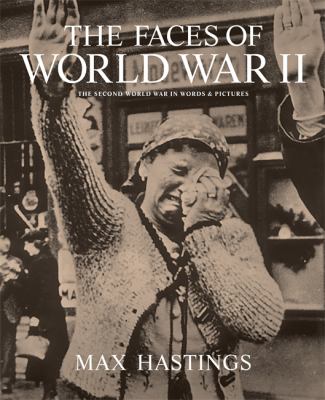 The faces of World War II : [the Second World War in words & pictures] / Max Hastings ; [with captions and picture selection by Michael Walsh].

The follow-up to Faces of World War I, this photographic journey is testament to the 100 million military men and women, and many more civilians, whose lives were so profoundly affected by the catastrophic war of 1939-1945. Faces of World War II pays tribute to all who fought and died, and won and lost for greater human rights and freedom. Structured by year, the book includes images of the major events from Blitzkrieg to the Battle of Britain, from the invasion of Poland to Pearl Harbor. With over 17 million people perishing during the course of the conflict, brutality, suffering and slaughter are inevitably shown, and these pictures take their place alongside poignant and uplifting scenes of civilians, nurses and doctors fighting their own battles, and the endless task of clearing the battlefields and the brief moments of respite.

This book remarkably captures the reality of war: the suffering, the toil and the hopelessness, as well as the mundane aspects of a world turned upside down in those seven fateful years. From enforced confinement to trench warfare and mechanization, Faces Of World War II shows every aspect of this very modern war, in images that will inform, shock, move, but always engage.

Subtitle on jacket: The Second World War in words & pictures. -Includes index. -Collects photographs and interviews from World War 2, depicting the horror, futility, boredom, and humor of the combatants.