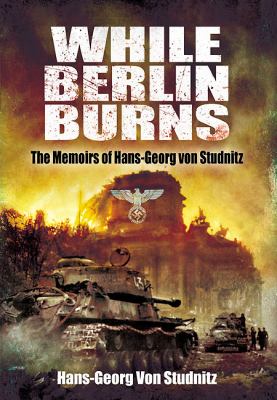 "The last few days have been days of intolerable tension...we have done nothing but pack our belongings and store them in bomb-proof sites. Danger threatens from all sides. The Americans are using phosphorous shells, against which all extinguishers are useless...In a world in which havoc spreads far more quickly than life can burge on, to look more than fifteen minutes ahead is pointless". Entry for 4 April 1945 From 1943 to 1945, while his world was deafened by the sounds of war as Germany fought on hopelessly, Hans-Georg von Studnitz - from his vantage point in the German Foreign Office Press and Information Section - recorded the day-to-day events in Berlin. He was in the perfect position to write such an account: He was entrusted with the drafting of Nazi political directives and was in constant touch with the foreign diplomats stationed in Berlin. This is the fascinating and comprehensive insight into life in Berlin: the bombings and its effects, the social life, the key personalities and events. Studnitz writes with the trained skill of a journalist and a political commentator, and his account has few equals in the literature of memoirs. AUTHOR: Hans-Georg von Studnitz (1907-1993) began his career as a journalist in Berlin in 1930. At the outbreak of the war, he was called up for service and attached to the German Foreign Office and Information Service, in which he held a senior post until the end of the war. After the war, he reported on the proceedings at the Nuremberg trials for Die Deit. SELLING POINTS: * Eyewitness account of the gradual destruction of Berlin in the last years of the war by a leading press officer. * Absorbing detail about everyday life as the city fell into chaos, from trying to find a decent restaurant to dealing with the regime's security measures. ILLUSTRATIONS: 8 pp plate section *