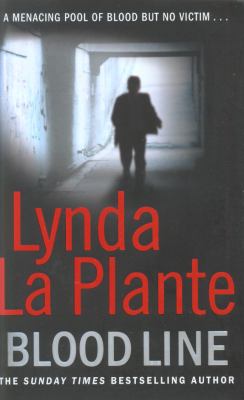 Under the watchful eye of Detective Chief Superintendent James Langton, Anna is given her first case. But is it a full-blown murder investigation or purely a missing person's case? An ominous pool of blood and no victim lead Anna on a desperate hunt for a man who has disappeared without trace.

Under the watchful eye of Detective Chief Superintendent James Langton, DCI Anna Travis is given her first case. But is it a full-blown murder investigation or purely a missing person's case? An ominous pool of blood and no victim lead Anna on a desperate hunt for a man who has disappeared without trace. As Anna becomes obsessed with seemingly irrelevant details, Langton fears that she is losing control of the case. They still have no body and Anna is under increasing pressure to make an arrest...

Under the watchful eye of Detective Chief Superintendent James Langton, Anna is given her first case. But is it a full-blown murder investigation or purely a missing person's case? An ominous pool of blood and no victim lead Anna on a desperate hunt for a man who has disappeared without trace.

La Plante's well-crafted seventh Anna Travis novel (after 2011's Blood Fury) finds the London detective chief inspector looking into a missing person case. Evidence of a pool of blood is discovered directly under the bed of 26-year-old car mechanic Alan Rawlins, who lived with his attractive fiance, Tina Brooks, but there's no body and no identifiable DNA. Travis and her team must investigate Rawlins's character and context in lieu of anything more concrete. As they dig deeper, the image of the hardworking, straitlaced Rawlins is replaced by one of a hard-living gay surfer. Several credible suspects emerge, and, in a nice twist, the identity of the victim comes into question. A lively plot and a number of satisfying revelations offset the leisurely denouement. La Plante's habit of revealing a little too much about earlier cases or books may frustrate readers who are joining the series late. Agent: Gill Coleridge, Rogers, Coleridge & White. (Sept.) (c) Copyright PWxyz, LLC. All rights reserved.

Less than a year after her fiance's murder, DCI Anna Travis is still trying to bury her grief in her work. James Langton, Anna's supervisor and former lover, is concerned about her and keeps a watchful eye on her latest case, which quickly turns from missing person to murder. Weeks after Alan Rawlins was last seen, a forensic team finds evidence of a large amount of blood in the flat he shared with girlfriend Tina Brown. Lacking a body and unable to identify whose blood was shed, Anna's team spreads a wide net and finds evidence of Rawlins leading a double life and being involved in the drug trade. But Langton, who considers Brown the probable murderer, wants to rein in the investigation, causing stress for Travis, a dogged investigator, and friction between the longtime friends. This seventh in Prime Suspect screenwriter La Plante's popular series lacks some of the suspense that drove earlier volumes, but it contains some nice twists, and the character of Travis continues to evolve and grow in complexity.--Leber, Michele Copyright 2010 Booklist

A seemingly run-of-the-mill missing persons investigation evolves into something more complicated in this installment of La Plante's Anna Travis series. An attractive London DCI, Anna Travis still reels from her boyfriend's murder, prompting her former lover and supervisor to second-guess the handling of a suspicious missing persons case. Alan Rawlins' father, an employee of the court system, has pulled strings to force the police to cast a wider net while searching for the absent mechanic. Initially skeptical of whether or not Rawlins was, indeed, missing or simply vanished of his own volition, Travis resents being ordered to expand the investigation but after a while, comes to suspect that the likable young man is the victim of foul play. It doesn't help that his girlfriend, Tina Brooks, comes across as unconcerned that her live-in boyfriend may be dead or that Travis is saddled with a gay partner she doesn't much like. Soon, the missing persons case turns into much more, and Travis and her team find themselves digging into an underworld of drugs and deception. La Plante intends for Travis to come across as a crack investigator, but falls far short. Instead, Travis is short and unpleasant to her subordinates, lacking in criminal insight, ignorant of the laws she is supposed to enforce, and she knows little about the investigative process. La Plante also pads the story by repeating the steps the investigators have taken in the case over and over, even though nothing new emerges from the reexamination. In addition, the plot twists come across as artificial and contrived, with cartoonish characterization. As a protagonist, Travis is bumbling and mean-spirited. The novel lacks suspense, making it a far cry from those featuring Jane Tennison, the female DCI from her Prime Suspect series. Plodding and dull, this thriller probably won't appeal to even the most die-hard La Plante fan.]] Copyright Kirkus Reviews, used with permission.
More book reviews at iDreamBooks.com